So I'm not sure how many of you reading this out there are theater or musical fans, but I'm sure there's got to be a couple, right?  Right?!?

I didn't used to be (outside of the Rocky Horror Picture show, or Little Shop of Horrors) but my wife is a big theater/musical buff and she's slowly but surely exposed me to more and more things that could quite possibly have come from Broadway. Rent rocks.

Speaking of Broadway, Light in the Piazza returned to Seattle last night and we had tickets to opening night.  I'd never seen the show before and knew nothing about it except that it was extremely well-received and had won a number of awards.

After seeing it… I kind of wonder… why?

Maybe I'm just not who the production was intended for (very likely) but there was one particular aspect of this production that completely stuck in my craw and made it basically impossible for me to enjoy the premise.  I don't want to spoil anything for anyone, but let's just say that the main female character isn't the standard.

And for those who want to be spoiled: she's revealed to be developmentally disabled because she got kicked in the neck by a pony at her birthday party. Seriously.

In other theater news, I'd like to put out a plug for By the Skin of Our Teeth… 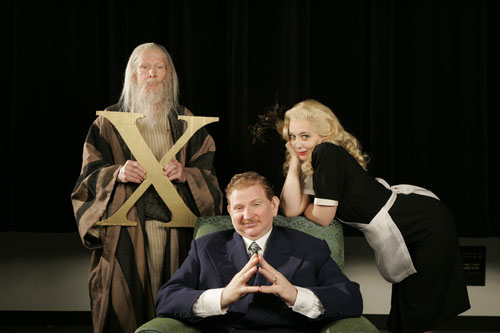 Check out Intiman.Org for more details, but if anyone is in the Seattle area and up for a bizarre screwball comedy with biblical references and woolly mammoths, come check it out.  I can't talk about it very much at the moment, but rehearsals are going on for the show right now and it's definitely going to be something to see. It opens in May, and there are three sign language interpreted performances for those who prefer them.