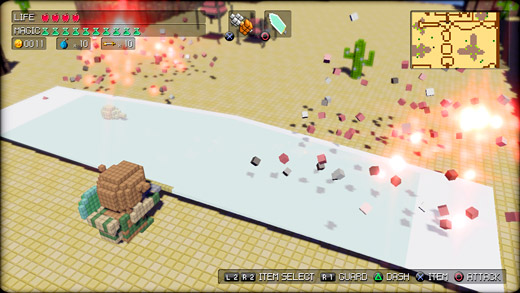 Been putting some time into 3D Dot Game Heroes on PlayStation 3 (PS3). After logging a couple of hours on it, I think it's pretty clear to see that this thing will be a nuclear bomb of nostalgia for anyone who's old enough to remember The Legend of Zelda on Nintendo Entertainment System (NES). I mean, it was pretty clear that it was a Zelda homage from previews and early buzz, but putting the game through its paces, I really don't think it's an understatement to say that this is NES Zelda brought into 3D.

I just cleared the third (of six) temples this afternoon, and so far I've collected the boomerang, bow and arrow, bombs, hookshot, and picked up a few empty jars and heart pieces. Er, I mean, "apple shards". The gameplay is pretty much the same as it was back then—The hero searches the overworld and then enters subterranean dungeons full of monsters and puzzles while slowly building up his resources of equipment and health/magic capacity. The only real difference between Zelda NES and 3D Dot Game Heroes (so far, anyway) is twofold:

1. Instead of shooting a sword beam when the player's life bar is full, the swords in 3D Dot Game Heroes grow to absolutely ludicrous sizes and are capable of skewering enemies from across the entire screen.

2. Players have the option of creating their own avatar thanks to an incredibly cool customization tool available from the main menu. The game offers a wealth of different models to choose from at the beginning (heroes, ninjas, monsters, tanks, and so on) but the possibilities are basically unlimited as long as the creator can think in pixels. Just for fun, I created an exact replica of Mario and tonight I'll probably do Mega Man. For purists, it's totally possible to create an exact likeness of Link to complete the illusion of having an official 3D NES Zelda sequel.

Although I am definitely old enough to remember bringing home the original shiny gold cartridge way back in the day, I have to admit I'm a little curious to see how the game will be received by younger players who may not have any recollection of Zelda's first incarnation. Personally, I'm having a great time and really enjoying this faux blast from the past—although I haven't enjoyed a true Zelda since Wind Waker, it's refreshing to see something like 3D Dot Game Heroes sweep all of the recent crap aside and focus again on the core formula.

In other Atlus news, anyone who's having problems with the soundtrack CD from Shin Megami Tensei: Strange Journey should read this:

"Due to a manufacturing error, the bonus soundtrack CD bundled with Shin Megami Tensei: Strange Journey does not play properly," stated Tim Pivnicny, Vice President of Sales and Marketing at Atlus. "We are moving quickly with our manufacturing partner to replace defective soundtrack discs, launching a fulfillment site into which customers can input their information and receive a new soundtrack CD in 2-4 weeks. We apologize for this issue, we appreciate our fans' understanding and patience, and we thank them for their current (and hopefully continued) support."

To formally submit a replacement request (limit one per customer), please visit: www.atlus.com/strangejourneycd.