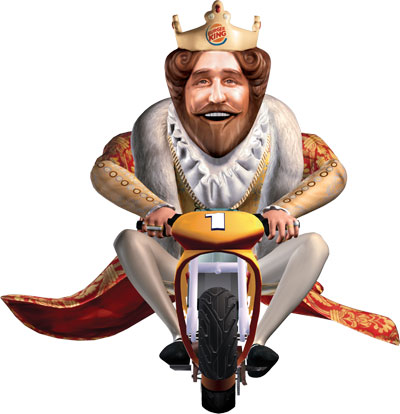 It's been a while, but it was inevitable that the mega-giants of the fast-food industry would dip their toes back into the booming video game market. Although their efforts at controlling the hearts and stomachs of America's gamers have recently been limited to in-game advertising, Burger King has taken it a step further and produced three separate pieces of actual software.

Available at Burger King restaurants nationwide, PocketBike Racer, Big Bumpin' and the subject of this review, Sneak King are available for $3.99 each with purchase of a value meal. Although I was slightly ill after eating the food, I have to say that I did feel as though my indigestion was worth it.

Best described as a lobotomized version of Splinter Cell, Sneak King stars the current version of BK's regal mascot, the slightly creepy, statue-headed King. Extremely simple and straightforward, the King is tasked with delivering food to his "hungry subjects." It's not exactly clear why he must sneak up behind them, but each person wandering about four small levels must be approached from the rear and caught by surprise.

Being stealthy is a simple matter. Targets have a very limited field of vision, and there is no real AI to speak of. With a moment or two to observe preset movement patterns, the King tiptoes into position. When ready, hitting the X button brings up a swing meter, and a second press determines what level of presentation the King gives. A regular flourish means simply handing over a snack, while a well-timed level 3 flourish sends him into one of several different uber-cheesy dance maneuvers, capped off by producing food to satisfy the passerby's hunger. 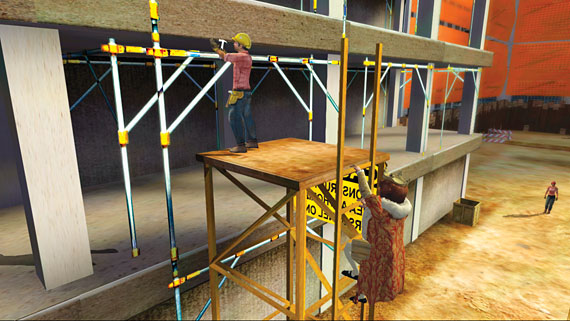 To be perfectly frank, the game should be terrible—but for some strange reason it's not. The writing never takes itself very seriously, there are numerous nods to the fact that the entire concept behind the game is cracked, and certain choices made by the developers are obvious meta-commentaries like the way the first-person view is seen through the eye-holes of the King's mask, complete with echoing breathing noise. Even better is the way the King struggles clumsily in and out of his "hiding places," the awkwardness of his motion an exact replica of a person in an uncomfortable costume trying to clamber inside a garbage can. (That very action in itself, another meta-commentary…)

Besides the appreciable intelligence hidden underneath layers and layers of Burger King branding and sloganism, it's simply hilarious and strangely entrancing to be presented with such an absurdist situation. How many games ask a player to combine super-fruity dance twirls and flame-broiled beef patties?

However, despite the fact that my intellectual dissection found several tasty nuggets to chew on, there's no hiding the fact that the game's 80 missions are all slight variations of the same sneak-tastic fry-slinging. Some goals might have time limits, and some may ask the King to deliver only to specific kinds of people, but I'm betting that most people will grow tired of performing the same basic action long before ever reaching the end. Sneak King is the textbook definition of a one-trick pony, but it's hard to complain since it does deliver some genuine laughs, and for $4, I definitely got what I paid for. If you are not sure whether your smartphone can display the type of casino games you want to enjoy, rest assured, because practically any Android, iOS, Blackberry or Windows Phone that can access the Internet is suitable also for playing mobile casino . Having a steady, stable internet connection is the most important factor to consider as you don’t want to be disconnected while you are winning the jackpot! If you have chosen a mobile casino, simply open the browser on your smartphone or tablet and navigate to the mobile website.

Although Solid Snake and Sam Fisher can rest assured that the King won't be usurping their espionage crowns anytime soon, I will say that Sneak King was successful from the perspective that it provides an hour or two of incredibly offbeat play, not to mention the fact that it got me into a Burger King for the first time in years. If it wasn't for the stomachache and heartburn afterwards, I'd say it was a win-win situation. Rating: 3.5 out of 10