Unlike Dan, I didn't think that's turning a riot cop into a hero was that great a leap considering that the world in its current state has so many things for the average American to be afraid of—at least, according to the current administration. My opinion is that the average police officer is already a figure worthy of respect, and I'd much rather be on Nick Mason's side than against. Seeing the world through his visor and bulletproof shield was quite easy to do given that the game makes absolutely clear that he's on the side of good, and any doubt regarding his motivation is demolished when every enemy in the game is revealed to be a hockey-masked fanatic.

Politics and iconography aside, the thing Urban Chaos does better than a lot of other shooters I've played recently is that it's able to keep the adrenaline level sky-high for nearly its entire length. The pacing and the level design are excellent, any negative claims of its linearity be damned. Dan is also on the money in his review when he states that the developers do a great job of providing interesting situations and areas for Nick to dispense a generous amount of law and order. Despite everything being set in an… urban… environment, each level felt different than the last, avoiding feelings of "sameness" quite handily. 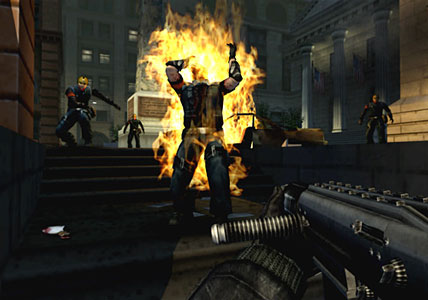 There may not be a lot to the shielding and gunning, but it's impossible not to respect any game that feels like a nonstop roller coaster while also managing to include pleasant surprises like being able to give orders to fellow emergency responders. I'm not going to say that Urban Chaos's implementation of bringing along a firefighter and telling him to bash down a door was very sophisticated, but it was done well and pulled off more convincingly than just about any other game I've played that attempted a similar mechanic.

It's clear that the developers' efforts were completely focused on providing an action-packed thrill ride, and everything in Urban Chaos is crafted to contribute to that end. It may not be the best-looking or most spectacular production on shelves today, but I give credit where credit is due when I say that the tenacity Rocksteady displayed when going after its goal was not only admirable, but wildly successful as well. Rating: 8 out of 10

The over the top, hockey masked bad guys, riot shield and powerful guns make this FPS stand out from the crowd. It’s fairly short, and it won’t blow you away visually (although this and Black were the best looking PS2 shooters), but Urban Chaos does what it sets out to do quite well – nonstop action! I recommend it.