The Pursuit Of Perfection 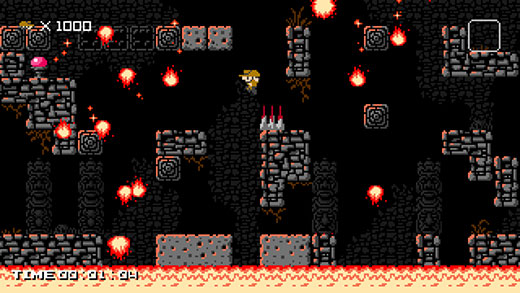 HIGH The feeling of finally completing a stage. Any stage!

WTF Why are the late-game spikes so difficult to read, visually?

To anybody who says modern games are getting too easy… Well, you haven't tried 1001 Spikes. This sharp-edged gem is a throwback to the days before developers cared about accessibility or managing player frustration levels, and it stands proud as the unapologetic, demanding experience that it wants to be.

I also hate it… but mostly, I love it.

The simple premise asks players to take Aban Hawkins, an Indiana Jones-ish sort of rogue, into a deadly temple and return with a fabled treasure. There's a bit of daddy angst backstory involved, but the plot isn't the point of the game. No, the real draw is the tough-as-nails, better-have-lightning-reflexes gameplay.

Each bite-sized stage is crammed full of pop-up spikes, shooting darts, stinging scorpions, rotating sawblades, falling platforms, lava pits… The list goes on. And on. And on. Basically, the entire game is made up of as many player-killing obstacles as possible, and believe me when I say that each of 1001 Spikes's rooms is deadlier than the last.

While an adventure stuffed with as many kill-traps as this one initially seems impossible, that's certainly not the case. A keen eye, quick reflexes and patience (lots and lots and lots of patience) are the keys to success. Careful observation and planning will reveal at least one path through each challenge, but seeing the path to the exit and navigating it are two entirely different things. In certain bits, the only opportunity for progress is a quarter-second window between two rolling boulders, and at other times it's about having absolutely perfect timing when leaping from a ledge and trying to land on a moving platform that may have hidden spikes on it.

To make a long story short, 1001 Spikes is brutally hard, and completing even one level past the tutorial feels like a major victory. However, that victory comes from player dedication and perseverance, and each death is due to overlooking something, having bad timing, or not being able to think in a hurry. When each section is mastered, it's because it was earned.

Outside the main campaign, there's a ton of content to keep players busy, although I suspect that just completing the story is enough for most. However, several other modes can be unlocked, including multiplayer challenges, bonus "lost levels," extra playable characters with different abilities, a store with various things to buy, and one absolutely unbelievable surprise at the end. This package is ridiculously generous from any perspective.

Although the sadistically-steep challenge will crush anyone expecting a simple platformer, players who press on into the meatgrinder that is 1001 Spikes will find a top-tier production worthy of respect despite the fact that it makes absolutely no allowances for anything less than perfection. Such a challenge is hard to resist, and although I've had more than a few moments of absolute frustration, I find myself coming back to 1001 Spikes over and over again. Rating: 9 out of 10


Disclosures: This game was obtained via publisher and reviewed on the Vita. Approximately 18 hours of play were devoted to the single-player mode, and the game was completed at time of review. No time was spent in multiplayer modes.

Parents: According to the ESRB, this game contains: violence, blood, and mild language. The language in the game is quite mild and there's very little of it, but the violence is ubiquitous. The player will be burned, impaled, and killed in a hundred other ways, although the graphics are highly stylized and not graphic at all.

Deaf & Hard of Hearing: I spent most of my time with the game without any sound at all, and had no problems. The gameplay is totally accessible, and the little dialogue that the game has comes via text only. Buy it without fear.