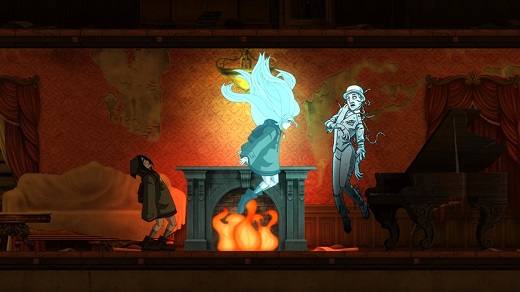 Indie developers have had some bright moments on Xbox Live, but for every Braid or Limbo, gamers are forced to endure a boatload of less-developed titles. Sure, many may feature some striking graphics or inspired moments, but Whispering Willows isn't one of them.

After a brief and purposefully vague opening sequence, we are introduced to Elena. She's a typical child who ignores her mother and runs off to a local haunted mansion because she has horrific premonitions that something awful will happen to her father, who serves as groundskeeper there. (Didn't we all experience the same when we were kids?)

Elena enters the mansion in search of her dad, and before long realizes she has the ability to transcend her mortal coil thanks to several well-placed (and friendly) spirits that occupy the premises. One by one, Elena develops new ways to use these powers as she traverses the mansion. However, her powers present a good part of the problem with the game.

Featuring truly stunning hand-drawn sprites, Whispering Willows is a visual tour de force when the player is in control. Fluid, effortless animation is matched by a dark graphic novel-like presentation that's attractive and often breathtaking. It can sometimes be too dark, but rarely did this affect the gameplay. The sound in Willows is also a highlight, with morose, ethereal strings used to good effect. Sparse environmental effects also keep the player appropriately on edge.

Unfortunately, similar praise can't be given to the awkward and rough cut-scene graphics. They just don't mesh with the in-game presentation, and serve little purpose other than to transition between sections. This story would have been better told with the in-game style, and could have easily been done via the title's countless (and chatty) dead souls.

The game's controls and environments are standard Metroidvania side-scrolling when Elena's in human form, and though there are multiple doors and pathways to peruse, all roads lead to the next level and few side routes produce diverging experiences. It's nothing groundbreaking, but it works well.

In spirit form, Elena can overcome countless environments without harm, manipulating and possessing objects to complete her objectives. But, the problem that I alluded to earlier is that our hero's powers are too convenient, always appearing a few seconds prior to encountering a puzzle or obstacle requiring those exact skills.

I'd feel a lot better about this obviously-not-a-coincidence structure if the game offered more creative uses of these powers at other times, but just as the control scheme and abilities really start to click, the game is over, and it feels like there are a million wasted opportunities here.

Despite the mechanical underachieving, the ostensible reason for Whispering Willows to exist is its storytelling, and to that end it works… to a certain degree.

As mentioned earlier, the main plot sees Elena looking for her dad. It's a tried-and-true plot device that would normally be enough to carry this brief title, but it gets muddled amid the countless chats with ghosts and various help quests. There are also dozens of diaries and notes to be collected, but they aren't interesting, nor do they move the story in any intriguing direction. I can handle tangential plot devices in a hundred-hour RPG, but when a title barely squeezes itself past the five-hour mark, it feels like what's here should make more of an impact.

Still, I cared about Elena and her dad, and wish the primary tale received as much attention as the presentation. Instead, I left Whispering Willows with the nagging feeling that it could have been elevated if the devs had added just a few more levels, a few more powers, and a few more story twists to bring it to a satisfying conclusion. In the end, I was… haunted… by the wasted opportunities. Rating: 5 out of 10


Disclosures: This game was obtained via publisher and reviewed on the Xbox One. Approximately 5 hours of play were devoted to the single-player mode, and the game was completed. There are no multiplayer modes.

Parents: According to the ESRB, this game is rated T for violence and blood. There is a minimal amount of cartoon horror and creepiness, but the gore is kept to a minimum. However, if you're offended by a cartoon girl leaving her body to flip a lever, steer clear.

Deaf & Hard of Hearing: The game relies on music and sound effects to pinpoint and enhance key events, but is playable for gamers who are deaf or hard of hearing.