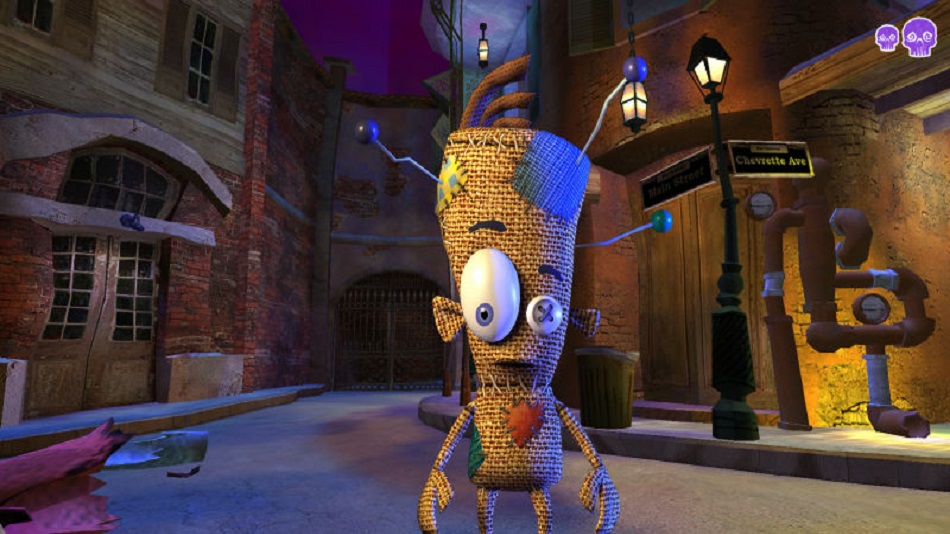 WTF Are there really this many bottomless pits in New Orleans?

…Yeah, it isn’t easy. In the early ‘aughts, when Sony’s PS2 was bringing the world several platforming franchises and Nintendo was still ruling TVs with Mario and company, Microsoft’s first beastly box was largely devoid of 3D platforming goodness.

While the original Xbox certainly gave us more than its share of amazing games, platforming fans were forced to look elsewhere. So, when a mid-range title like Voodoo Vince showed up unexpectedly, it got lost in the shuffle. However, even those who did remember it from back in the day were a little confused as to why Voodoo Vince: Remastered showed up on release lists.

A few minutes of exposition later, players learn that Madam Charmaine has a particularly potent brand of Zombie Dust, and bad guy Kosmo the Inscrutable wants it. Of course, the robbery efforts go awry and this magical dust brings our titular hero to life, just in time to save the newly kidnapped Charmaine and restore order to the world.

From there, players are whisked into action around the picturesque city of New Orleans, first learning the core mechanics of having Voodoo Vince collect magic potion bottles to restore and build health, while simultaneously learning magic tricks along the way. Unfortunately, this means learning new skills at precisely the moment gameplay requires it, meaning there is zero thought in putting the abilities to use, and rarely any occasion to use the skills again. Even in 2003, this was limp, lackadaisical game design. Today, it’s inexcusable.

One feature that does stand out is how Vince inherits this magic – by maiming himself in increasingly ghastly fashion. No, it’s not graphic, but even voodoo dolls shouldn’t be subject to throwing themselves into meat grinders and pools of acid. Seeing how Vince gets to harm himself next is a refreshing dash of uniqueness in a game otherwise littered with tired platforming tropes. 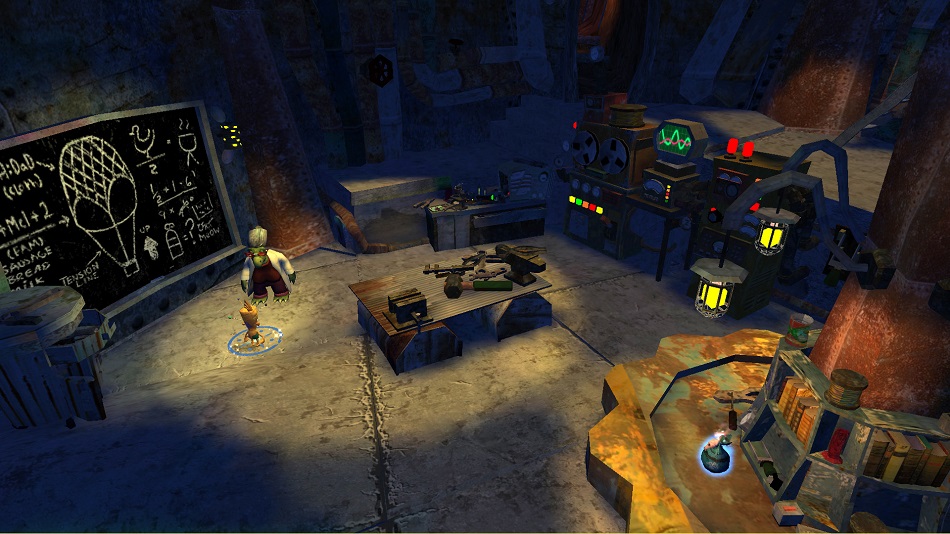 Indeed, the game is full of proven, but ultimately boring gameplay. Standard combat actions rule the day, with a nearly unstoppable “pulse wave” available should enemies begin to pile up. Given the creative manner in which Vince harms himself to gain power, the developers missed a golden opportunity to defeat enemies in equally unique ways. Over the course of several hours, spinning and punching becomes exhausting, and this oversight becomes impossible to overlook.

Visually, Voodoo Vince: Remastered is a mixed bag. While it’s technically a sharper rendition of the 2003 original, it’s nowhere near modern standards thanks to tons of low-res textures, jagged edges, tearing and glitching throughout the journey. Very few visuals indicate this is a remastered game, and more than a few seem lifted directly from the original, with nary an improvement to be had.

If Voodoo Vince: Remastered was hyper-fast and responsive, the poor visuals would (almost) be forgivable. Instead, the controls are sluggish, load times are unbearable, and framerates begin to chug the instant enemies begin populating the screen. It’s unacceptable in this day and age, and begs the question as to why a C-level retro title was released in such slapdash shape.

The storytelling and voice acting is adequate – even funny at times – but I’m not sure it’s enough to keep gamers playing through glitchy, dated levels. However, it must be noted that the game’s use of authentic, period-appropriate jazz and blues is magnificent. When a moody, murky New Orleans nightscape is met with equally bluesy, downbeat sounds, the atmosphere improves tenfold and Vince’s mission even seems a little more important as a result. I can’t help but wonder — If this level of detail was given to other aspects of the game, would I be writing a different review?

What’s most frustrating about Voodoo Vince: Remastered isn’t the myriad of things it gets wrong, but how close it comes to getting so many things right. For every unique gameplay element or subtle environmental nuance, there are countless reminders that this is a hastily-produced remaster, rather than the proper reintroduction of an old franchise. Despite its tired tropes, I feel Voodoo Vince: Remastered could have been something unique for today’s gamers. If Ratchet & Clank can find platforming success on modern consoles, there’s no reason Vince and his self-mutilation schtick couldn’t be more modern and unique for 2017.

While by no means a terrible game, Voodoo Vince: Remastered will instead be seen as a missed opportunity, and the possible end of a franchise that never really had a chance to get started. Rating: 5 out of 10

Disclosures: This game was developed by Beep Industries and published by Microsoft Studios. It is currently available on Windows PC and Xbox One. A review copy of the title was obtained via publisher and reviewed on the Xbox One. Approximately 8 hours of play were devoted to the single-player mode and it was completed. There are no multiplayer modes.

Parents: This game is rated T by the ESRB. It’s a lighthearted platforming game, with cartoon violence used for humor, and never becomes graphic or gratuitous. It is rated Teen mostly due to subtle dialogue innuendos and themes.

Deaf & Hard of Hearing: The game uses some audio cues to reflect onscreen action, but these are not necessary for successful gameplay. All dialogue is accompanied by text.

Ouch, you gave that game a pummeling!
Technical gripes aside – I disagree with your description with the game’s use of powers. It is talking the Point and Click approach to items, so the intent was for most of them to be one-use-only type things.

I am by no means a huge fan of Voodoo Vince but the game has its fans and I think they will be well served by this HD version, warts and all.

Thanks for writing! My intention was not to give anything a pummeling, that’s for sure. I think my frustration with the approach to special powers is how they’re tossed aside once the initial action is done. I feel revisiting these skills as the game progresses, in not-so-obvious ways, could have given gamers rewarding, well-earned “a-ha” moments that simply doesn’t come from one-and-done use. Like I closed with — Voodoo Vince: Remastered is by no means a terrible game. My score was more based upon what I felt were missed opportunities, rather than missteps. Remember, 5 is an average score, meaning… Read more »

To be clear – I didn’t check the score, I only read the review and it felt like you gave the game a right smacking.

Agree that it would have been nice but, again, we don’t fault a point-and-click game for only using their items once. Still, enjoyed the review!

As for ‘Iconic’, initially Xbox was going to get Malice, Psychonauts, Blinx, Voodoo Vince and Whiplash. It feels like Microsoft saw the writing on the wall (and some of them straight up got delayed) and most of those went multi-platform.

Passed on this in 2003, and seems like I made the right call. Pity that they didn’t take the opportunity to fix the mistakes the original had to make the first game better.

As for other iconic Xbox platformers, um… does Blinx count?