A steaming pile of steampunk. 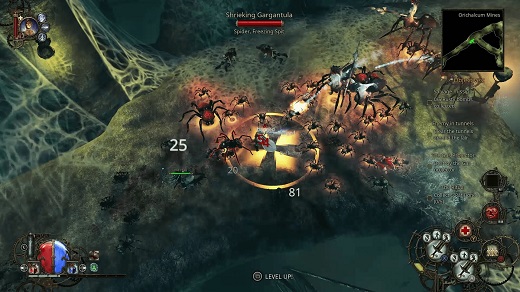 HIGH Gamers don't need to buy additional classes to play through the game.

LOW Gamers won't want to, either.

WTF Who decided to put a bad tower defense game in the middle of a worse Diablo clone?

By a show of hands, how many people here have Diablo III?

Okay good. Now close this browser and go play it. Nothing here will be even remotely as interesting.

For those who remain, it should be obvious that this review will not be positive. No attaboy is given here, and no redeeming qualities will be discussed. That's because The Incredible Adventures of Van Helsing is a bad game—it's a substandard copy of a better title and sports loads of technical issues, to boot. I'd even say it's a smear on the reputation of Neocore Games, which has actually crafted some memorable RPGs over the last several years.

What's worse is that this isn't even a new title. Van Helsing (actually a trilogy) saw considerable success on Steam starting in 2013. A version was slated for Xbox 360, but the plug was pulled when the project was deemed unsuitable for the machine.

But guess what? Xbox One owners are now the "lucky" recipients of an aging title that would look more at home in a litterbox than an Xbox. Harsh, to be sure, but after years of developing a console version of this unworthy isometric action RPG, how could so many glitches, gameplay imbalances and unwieldy controls possibly make it through to the final release?

For those unaware of the mythology behind the game, Abraham Van Helsing is a famed monster hunter who returns in this Steampunk-inspired Diablo clone. This version was rebuilt for Xbox One and released for free as part of Microsoft's "Games with Gold" campaign, but it would be theft at half the price.

First off, don't be fooled—the complete experience isn't free, as only the hunter class is available from the outset. To access the other two, gamers will need to shell out $5 each. It's not necessary since all classes perform similarly, but it's worth noting.

As the protagonist, gamers endure countless stops on the way to hunt a mad scientist, facing wave after wave of increasingly potent enemies. However, they won't have to hero alone. The title includes a ghost-like companion named Katarina who can help in battle. Disappointingly, other than a few throwaway lines she contributes little to the story, and actually seems kind of pointless…

…Well, pointless until the game suddenly jumps from accessible to impossible without warning. At that point, Katarina becomes good to have around. She's fairly customizable and can be fitted with a weapon that fits the player's style of attack. Unfortunately, she's also glitch-prone and often stands around like an angst-ridden goth teen while the player is mauled from all angles.

Though there are a wide range of enemies, after the hundredth round of rats and wolves it becomes tedious and repetitive. To make up for the lack of variety, the developers decided it would be easier to simply make the opponents noticeably tougher at higher levels, with little transition between difficulties. The player's health bars drain at least twice as fast, and opponents' blows are much stronger. It's unbalanced, frustrating, and made me throw more than one controller.

To be fair, the game's creators did try to implement some much needed breaks from the monotony in the form of tower defense sections, but these fail to deliver on their promise. In these bits, players defend a town from waves of monsters, complete with pre-fab traps to unlock or buy. While the goal was obviously to spruce up the adventure's flow, they actually remove the player from the proceedings since the shift in play is dramatic. It's also nowhere near as good as dedicated tower defense titles. I applaud the designers for the attempt, but the resources spent on tower defense should have been focused on making the core gameplay better.

Graphically, the game shows its age. There are fleeting moments of nice detail, but the designers went for a safe, simplistic design. Technically, any game with this many enemies on screen is bound to have framerate and clipping issues, but Van Helsing suffers more than most. As an old game that doesn't seem to be fully leveraging the new hardware, it's hard to watch, harder to play, and somewhat unacceptable.

In the end, Van Helsing suffers most for being "just another game" in a crowded field of isometric action-RPGs. It's not as addictive as Diablo III, not as pretty as Torchlight 2. And, despite an impressively deep mythology, there's nothing differentiating its faceless monsters from the countless hundreds of enemies seen in other, more polished titles.

Gamers will play Van Helsing because it scratches the itch for this type of action adequately at this price, but the repetitive action, awkward controls, poor graphics and strange tower defense levels make it feel like an unfinished title. Despite being a cheap (or free, on Xbox One) diversion, Van Helsing is a bad value, and a worse investment of players' time. Rating: 3 out of 10


Disclosures: This game was obtained via publisher and reviewed on the Xbox One.

Approximately 5 hours of play were devoted to the single-player mode, and the game was completed. There are no multiplayer modes.

Parents: According to the ESRB, this game is rated T for Teen. There's plenty of fantasy hack and slash action, but the cartoonish art style and distant camera angle ensure nothing gets too explicit.