A Diamond In Some Deep Rough 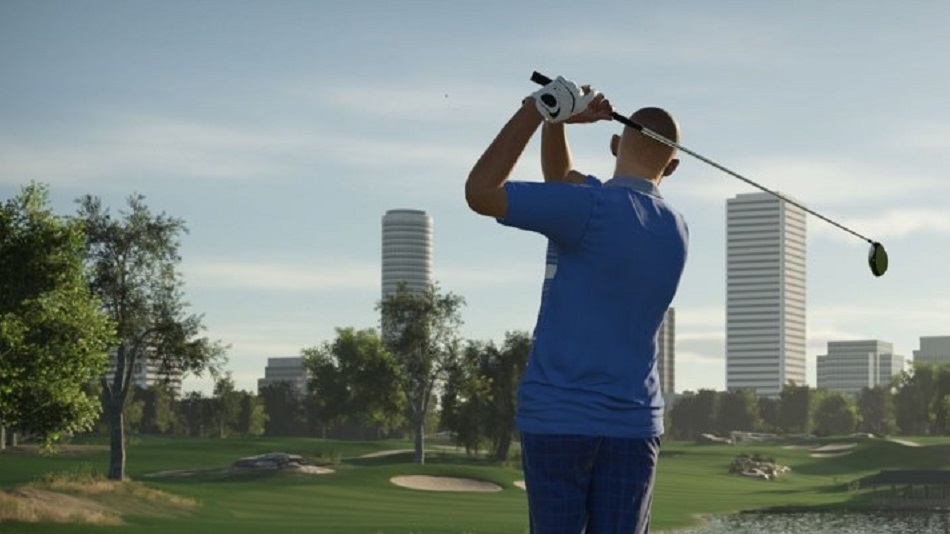 Please forgive the tear in my eyes, but I’m feeling a touch nostalgic. My first review for Gamecritics was for EA Sports’ Rory McIlroy PGA Tour. Though I didn’t love Rory’s digital endeavors, nor was I a fan of the 2014’s The GoIf Club, I nonetheless jumped at the chance to come full circle and review The Golf Club 2, as the console world hasn’t seen a golf sim since.

Was it worth the wait? Yes, provided gamers are patient. But, those seeking the hand-holding more prevalent in EA’s golf series will face a steep climb toward mastering this ridiculously deep sim.

The Golf Club 2 is made by the same team responsible for its 2014 predecessor, and retains many of that title’s trademarks – most notably, its unforgiving realism. While the game’s strangely narrated tutorial does a decent job of getting players on the course, they’ll likely hit their boiling point long before they hit their first green.

This game is unflinching in its dedication to realistic links play, and is unforgiving in how it can make gamers fail in so many ways. Yes, much like Top Spin 4 did for tennis, The Golf Club 2 upends traditional control schemes in favor of complex accuracy. It will likely be hours before players become comfortable with the control scheme and the mechanics “click” in their minds. But that moment will come, and when it does, the sheer depth of control and nuance makes The Golf Club 2 one of the most rewarding – if not best – sports titles available.

The mechanics themselves aren’t much different than what Rory and Tiger veterans have come to know, except that the classic three-click/power bar structure is nowhere to be found. Instead, all power and aim control is mapped to the right analog stick, and every imperfection in a player’s stroke is reflected on the screen. Whereas EA’s titles offered a certain level of leniency and forgiveness so users could focus on a solid strike, The Golf Club 2 demands this singular movement be a perfect marriage of strength, direction and cadence.

Yes, the smoothness of the swing motion is scrutinized — a janky, John Daly-esque whack will land shots in the trees more often than not. Add in the fade, draw and loft controls, and the stroke-to-stroke gameplay becomes quite a handful.

In contrast to more arcade-focused titles, the game’s HUD is minimal, with no aiming arcs or after-shot spin controls to get in the way. In The Golf Club 2, good shots are earned, plain and simple. Even on the game’s “very easy” difficulty – which I admit to using without an ounce of shame — casually flinging the analog sticks will result in frustratingly quick rounds of golf and colorful rounds of profanity.

Unfortunately the game’s hit-or-miss graphics work against the player. Though much improved from its predecessor, The Golf Club 2 resembles a mid-generation Xbox 360 title, with a noticeable stutter during the swing animations that belie the game’s focus on smooth, accurate strokes. It’s a mere millisecond hitch on the screen, but it will cost a ton of yardage on the course. Putting is also a challenge – not only for the graphical stutter, but also because the greens are terribly difficult to gauge. When starting out, users should be prepared for many near-misses and high round scores.

Once players adjust to these hiccups, there’s nothing offensive or remarkable about the game. Courses are diverse and unique, with enough visible life to prevent players from feeling like they’ve been stranded on a deserted golfing island. It’s not exactly as fist-pump-inducing as EA’s efforts, but golf isn’t driven by adrenaline, and the focus on quiet skill-building is oddly refreshing. 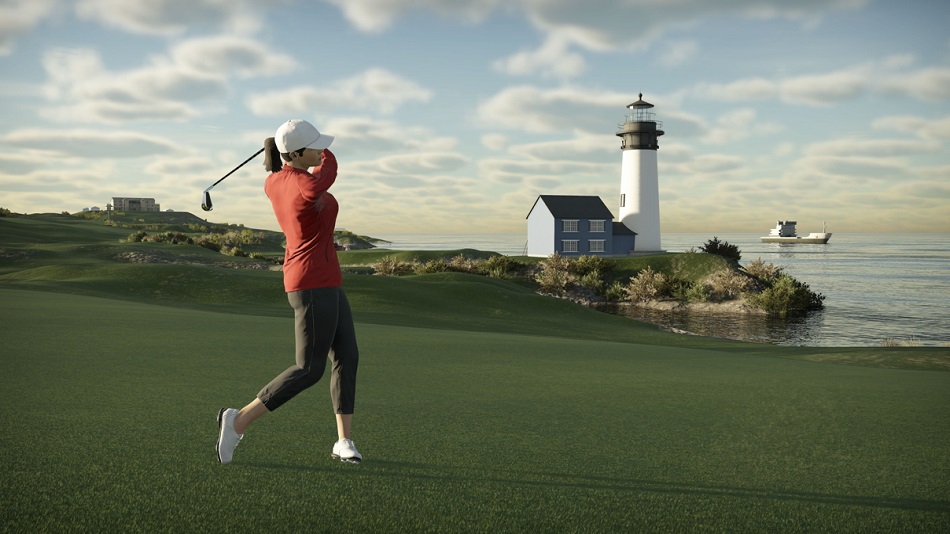 The audio is also extremely odd, right from the outset. The tutorial narrator sounds as if he was pulled from the company’s mailroom and told to recite lines. At no point did I ever believe this guy was a golf pro preparing me for tournament life. Instead, I received vague comments like “let’s try that again” with no feedback as to WHY my approach was incorrect. That said, I would have still appreciated this guy joining me on my career. Playing those courses with minimal crowd audio, no caddies and no commentary makes for a very lonely walk through 18 holes. Though the presentation improves as gamers progress toward bigger tournaments, it’s still a far cry from EA’s precise recreation of televised golf.

The game gets moving right after completing the tutorial, as players are invited to “create” their onscreen characters. I use quotation marks because this player creator is so limited and lifeless, I wonder why it was even included. Considering the vast improvements in facial scanning used by titles like NBA 2K17, it’s downright disappointing to see a creation suite limited to skin tones and adjustable brow lines. Sure, there are plenty of sliders to tweak, but even with adjustments, none of the stock heads and bodies ever look quite right. Since most of the playtime is spent behind the avatar it’s not a big deal, but a letdown all the same.

Once created, players are given the chance to build their own careers. Most sports titles follow a natural season progression, but The Golf Club 2 is unlicensed by any organization or company, freeing users to craft every element of their schedules. With no required events or qualifiers, gamers can design a career path that suits their needs, including only courses that interest them. However, with no licensing to speak of, the career mode’s primary focus is simply to make players improve. The limited slate of unlockables don’t do much to improve performance (or fashion sense, for that matter).

Atypical of most console golf sims, The Golf Club 2 truly hits its stride when players venture online — the sheer amount of downloadable, user-created courses is staggering, with 100,000+ options currently available, and more certainly on the way.

Using the game’s much improved course creator, users can easily construct their dream 18 without breaking a sweat, adding as much or as little detail as they desire. From there, a few button presses puts the course online, where it can be downloaded, rated and reviewed by the growing community. Of course, many inventive golf fans have recreated iconic courses that didn’t make the cut in an unlicensed title, but others are just plain bad. Regardless, with so much content available for free, there’s never a reason to play the same game twice, which is a wonderful thing for a $40 title.

The Golf Club 2’s other shining moment comes when it becomes social, and users can claim dominance over those 100,000+ courses. In the lag-free Online Societies mode, gamers can join fellow players in single rounds, or take it to another level and join golf “clans” to fight for ongoing leaderboard supremacy. Even if the group isn’t online, players can go up against simulations of their clan members’ previous rounds, continuing the competitive element. Though there are some presentation flaws when teeing off against a “ghost” player, it’s still exciting to know there’s never a shortage of competition.

Considering The Golf Club 2 is the only new console golf sim released over the last few years, it’s a no-brainer for those longing to return to the digital links, but that shouldn’t be the only reason fans make the purchase. Though it has numerous unavoidable – and some unforgivable – flaws for a 2017 title, The Golf Club 2 gives fans a near-limitless source of new content alongside unparalleled challenge. Rating: 7 out of 10

Disclosures: This game was developed and published by HB Studios. It is currently available on PS4, Windows PC and Xbox One. A review copy of the title was obtained via publisher and reviewed on the Xbox One. Approximately 12 hours of play were devoted to the single-player and online multiplayer modes.

Parents: The ESRB has rated this game E. It contains Comic Mischief. This is a golf simulation game in which players select customizable characters to compete on realistic golf courses. Players can create and customize their own courses while sharpening their skills in variety of game modes (e.g., Career, Tournament, Season). Players have the ability to strike animals (e.g., horses, cows) on the course with golf balls; animals react by falling to the ground.

Deaf & Hard of Hearing: The game uses some audio cues to reflect onscreen action, but these are not necessary to play and enjoy the game. It’s fully accessible.