Aren't you a little short for a Stormtrooper? 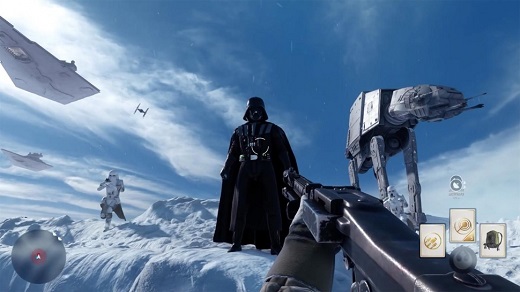 LOW The lack of depth and small selection of environments.

Fans have waited a long time for this one, and I'm happy to report that for the most part, they're rewarded with a game worthy of the wait. Star Wars: Battlefront is a winner and it's money well-spent for even casual Star Wars fans. But before running out and dropping the cash, experienced shooter fans should read the rest of the review—most of my complaints about the game will be relevant to them.

But we'll get to that—let's start with the positives.

Graphically, Star Wars: Battlefront is stunning to look at. Locations are exactly as fans like myself imagined them from the movies, with levels of polish and detail that make even the most visually charged titles seem pedestrian. The thick forests of Endor are captured with loving accuracy, full of lush greenery, hollowed logs, and convenient tree perches. The dusty, wind-blown browns of Tatooine and desolate ice spans of Hoth are brought to life in striking detail as well, with just enough shifts in scenery and terrain to make these maps effective playgrounds.

Just as impressive are the player models and outfit options, which are also true to the source material. When players get up close and personal with a Stormtrooper, they can expect to see reflections in the Imperial visors … at least until that Stormtrooper becomes aware of their presence and fires off those iconic "pew pew" laser blasts into their gray matter.

This authenticity continues when players get the chance to shed their anonymity and become named characters, either through Hero cards or during the Heroes vs. Villains mode. In these occasions, gamers finally get the chance to show off Jedi acrobatics or Fett-styled "death from above" blasts. It's enjoyable fan-service moments like these that offer a unique value that can't be matched by any other shooter out there.

On the other hand, I'm guessing that EA's budget was blown on visuals, because the rest doesn't stack up.

The voice acting in Star Wars: Battlefront is grating at best and painful at worst. Few voices hit the mark, and a handful are so bad, they removed me from the moment entirely. I actually checked the credits to see if the actor who voiced Han Solo was "Morty the Sausage Guy from Wrigley Field." It wasn't, but the beer-stained memories remain.

Mechanically, Battlefront is a smooth, tight multiplayer shooter that manages to be accessible to online newcomers while also offering some interesting play modes—and they need to be interesting, because unlike previous incarnations of the SW:BF series, there is no campaign mode and very little to do for solo gamers.

Basically, lone wolfers can tackle short missions against AI-controlled enemies, with the mode mostly serving as a tutorial for the shooting mechanics and obtaining power-ups. The other single-player offerings, like a generic Horde-type challenge or a bot-driven deathmatch, aren't exciting enough to hold a person's attention unless their Internet connections are down.

While solo players don't get much, online is where this game lives. When Battlefront is at its best, such as in the 40-player, land and air Supremacy mode, it's sheer joy to any fan of the IP. The mode centers on controlling a series of points on the map. It's focused enough to keep teams on task, while open-ended enough to allow newer players to contribute along the way.

Unfortunately, Battlefront tends to get a bit too chaotic for its own good during more elaborate modes, like Walker Assault—a mode seemingly designed for Twitch uploads. Though I've heard countless reports of this being Battlefront's source of memorable moments, I found my three-plus hours in it to be a discordant mess full of air-to-ground deaths, odd glitches, and some of the most camper-friendly respawn sites in recent memory.

By the time a team successfully downs an AT-AT (something that hasn't been done smoothly since the Atari 2600) players will likely miss the setpiece payoff due to respawning or trying to avoid being sniped from above. Is the chaos true to the Star Wars universe? Absolutely. But as massive as it is, I doubt many will play through after the initial "wow" factor fades.

Despite the chaotic missions and sparse single-player content, the biggest complaint I have is, unfortunately, a big one. Star Wars: Battlefront is simply too shallow in its current incarnation. Sure, the game is primed for a ton of DLC additions (several free add-ons have been announced in addition to a paid season pass) but is it too much to ask that a game be more complete at launch?

With just a handful of locales and a few extra maps within each type of environment, Battlefront isn't going to make anyone forget the other big-name shooters out there. The areas are beautiful and provide entertainment for a few hours, but if this game is going to have any real legs, the upcoming additions had better deliver some substantial variety and depth.  Similarly, the weapon upgrades and loadouts are extremely limited, and the ‘Card' system was done much better in Titanfall, another EA game that seems like it came out a long time ago, in a galaxy far, far away.

In my view, it seems that EA set out to bring Star Wars to as wide an audience as possible, trying to satisfy both shooter newcomers and twitch-pro frag artists, and everyone in between. The problem is that while Battlefront delivers a rich Star Wars experience, the play is far too limited for shooter veterans, and too intimidating for multiplayer Padawans.

Of course, for the huge fan base that falls between those two extremes, Star Wars: Battlefront is going to be a massive hit, and with good reason. The game is gorgeous, authentic, highly detailed, and rife with potential to grow into something much bigger. And, with The Force Awakens coming to theaters any minute now, there's no better time for gamers to reacquaint themselves with the ways of the Force this holiday season. Rating: 8 out of 10


Disclosures: This game was obtained via purchase and reviewed on the Xbox One.

Parents: According to the ESRB, this game is rated T. While the game is centered on shooting and violent action, the fantasy nature of the characters, and the complete lack of blood and gore keeps this on the right side of parental concerns. Compared to what's out there, Battlefront is less aggressive than a chapped lip.

Deaf & Hard of Hearing: The game's music, effects and environmental sounds add A LOT to the overall experience. However, there are subtitles, and the game is fully playable for those who are deaf or hard of hearing.