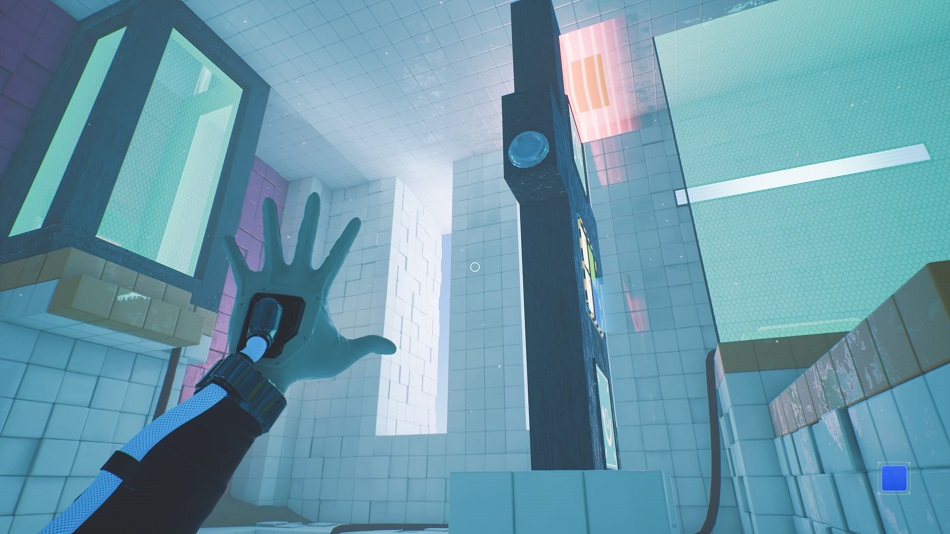 LOW Why does the framerate stutter in an empty room containing nothing but moving blocks?

WTF How come space scientists keep getting abandoned on planets full of puzzles?

I’ve spent a lot of time playing puzzle-based, first-person “walking simulators” these days, such as Gone Home and The Turing Test, and not one of them can be discussed without mentioning Portal. Of course, Valve’s classic puzzler was an instant classic and remains worthwhile today, but after 10 years of doing so, I have to ask myself how long I need to make the same comparisons? Based on my time with Q.U.B.E. 2, it’s going to be a while longer.

In terms of mechanics, Q.U.B.E 2 makes a good first impression. Whereas the original Q.U.B.E was a direct variant of Portal’s “manipulate the tools in the room” aesthetic, this sequel introduces a touch more freedom. It’s still very much a matter of players using the tools and abilities available in front of them, but now the blocks have distinct functions. For example, red blocks can be extended and compressed, blue blocks can create jump pads, and green blocks harbor a number of environment-specific functionalities, depending on the level.

One thing Q.U.B.E. 2 gets very right is physics. Though gravity and momentum have been key to this genre since (yes, I’m making the comparison again) Portal, Q.U.B.E 2 brings more involved, slightly less obvious use of slippery surfaces, variable speed fans, and environmental damage. Later in the game, the levels present intricate tests of multiple skills which play out like a futuristic Rube Goldberg machine, and are just as satisfying when figured out.

Apart from these minor twists, the game still follows the time-honored tropes of its genre — introduce a skill, use the skill, compile the skill for “boss” levels, and repeat. There are admittedly some cool skill combinations used here —  a particular favorite was when the user needs to think three steps ahead, precisely add a substance to a block, move the block, and then burn the block to open up a previously unattainable passage forward. 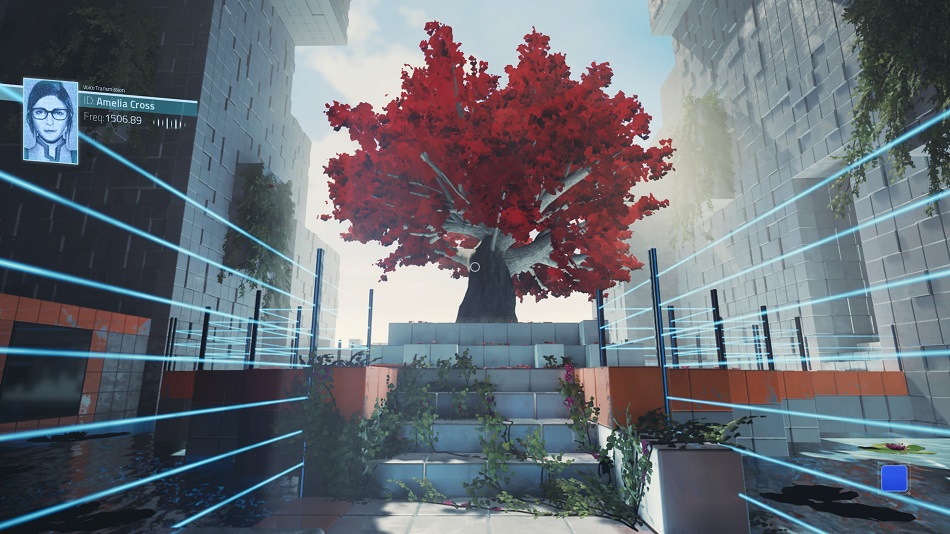 I would have loved to see more of these moments, but for most of Q.U.B.E 2‘s duration, the game flow still telegraphs the solutions by offering up a new ability or two each round.

It may seem strange to start discussing the storyline so late in this review, but this is one of the biggest drawbacks of Q.U.B.E 2 — and the entire first-person puzzle genre, for that matter. Here, players assume the role of Amelia Cross, a space scientist that somehow finds herself stranded on a alien planet riddled with puzzle rooms. This must to be a common problem for futuristic scientists, because gamers have seen this scenario countless times before.

Of course, there’s also the obligatory narrator/guide/hand-holding companion to add some dramatic gravitas to each level, revealing a little more background along the way. It’s a proven formula, and Q.U.B.E 2’s strong voice acting makes it work. That said, there are only so many times players will be “shocked” by obligatory plot twists before they become redundant.

Visually, Q.U.B.E 2 is both brilliant and off-putting. The overall design is sharp, with stunning backgrounds and cool lighting effects. Yet the choppy framerate – even when very little is actually happening onscreen – takes players out of the moment, and can negatively affect their success in later puzzles, which require precise juxtapositions.

When Q.U.B.E 2 came to its abrupt end after six hours, I was torn. On one hand, I felt like there was a lot of promise with these mechanics – perhaps levels of promise the developers are saving for Q.U.B.E 3. On the other hand, I found myself apathetic about the payoff. Neither the storyline nor the final puzzles delivered the type of reward I enjoyed with similar titles.

For fans of the genre there’s plenty of challenge to be had, but those seeking something that compares a little less directly to Portal should probably hold off. Rating: 6 out of 10

Disclosures: This game is developed by Toxic Games and published by Trapped Earth Games. It is currently available on PC, XBO and PS4. This copy of the game was obtained via publisher and reviewed on the XBO. Approximately 6 hours of play were devoted to the single-player mode, and the game was completed. There is no multiplayer mode.

Parents: According to the ESRB, this game is rated E and contains Mild Language. This is a first-person puzzle game set in a futuristic world, with limited interaction with other characters. I didn’t notice any harsh language during my playthrough, though the game’s sense of loss and abandonment might be too much for younger gamers.

Deaf & Hard of Hearing Gamers: Subtitles are available for all dialogue, as well as in-game sounds and ambient effects. There is nothing preventing gamers who are deaf or hard of hearing from enjoying the title. it’s fully accessible.