Slick On The Ice, But Stuck In A Rut 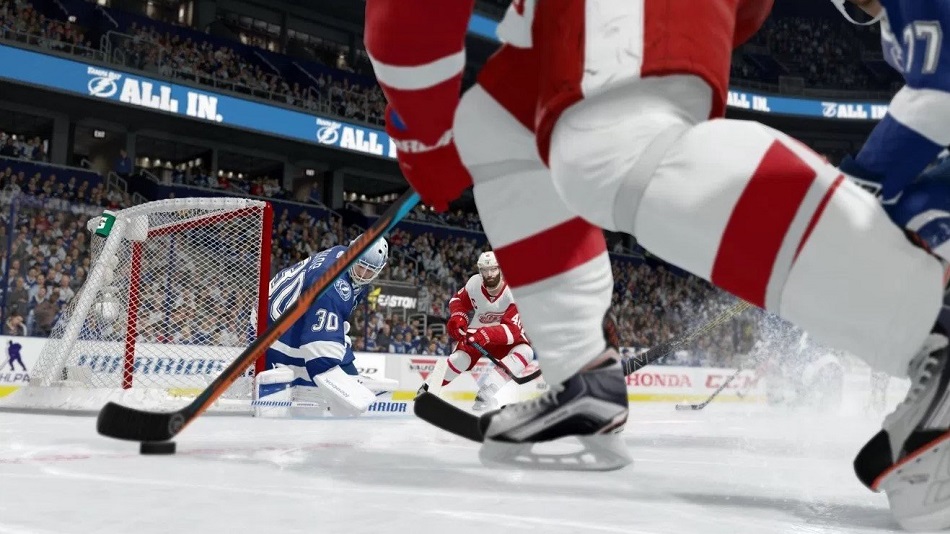 LOW  Be a Pro is awkward, paling in comparison to career modes from other EA titles

Every year I approach EA’s annual NHL offering with an open mind and a longing heart, hoping that the series will somehow match its modern technology with the effortless, addictive simplicity of NHL ‘94 on the Sega Genesis. Alas, NHL 18 is not a return to those wistful dorm room days, but EA seems to be inching – ever so slowly – toward regaining that spirit.

Upon booting it up, NHL 18 is eager to tell players about its myriad of new features. But in reality, there are only a few notable upgrades from the previous edition, none of which warrant a new purchase.

First and most important to gameplay is the addition of new offensive and defensive skill stick controls. Players who choose to employ total stick-based controls will enjoy a litany of new dekes and slick stickwork. Complicated maneuvers between tight defenses are possible, though many of these still feel more like the result of accident than skill, and are rarely repeatable unless the player finds him/herself alone on a breakaway.

On the defensive front, the increased stick control does prove handy in jarring pucks loose from agile opponents, but more often than not, firm body checks against the boards are still more effective. Still, these tweaks are welcome.

The second new add is a fully-fleshed training mode, led by key members of the real-world Team Canada. This is a nice touch for newcomers, as it doesn’t just tell players how to use the advanced stick controls during the game, but also explains when and why to employ these strategies in the heat of battle.

Though I can’t say these tutorials necessarily led to more on-ice success, I did find myself recognizing opportunities within the game and saw this training come to life in actual play situations. As an NHL purist (read: luddite) my skill stick use is limited, but I felt far more comfortable putting these abilities to work in NHL 18 than in previous editions. 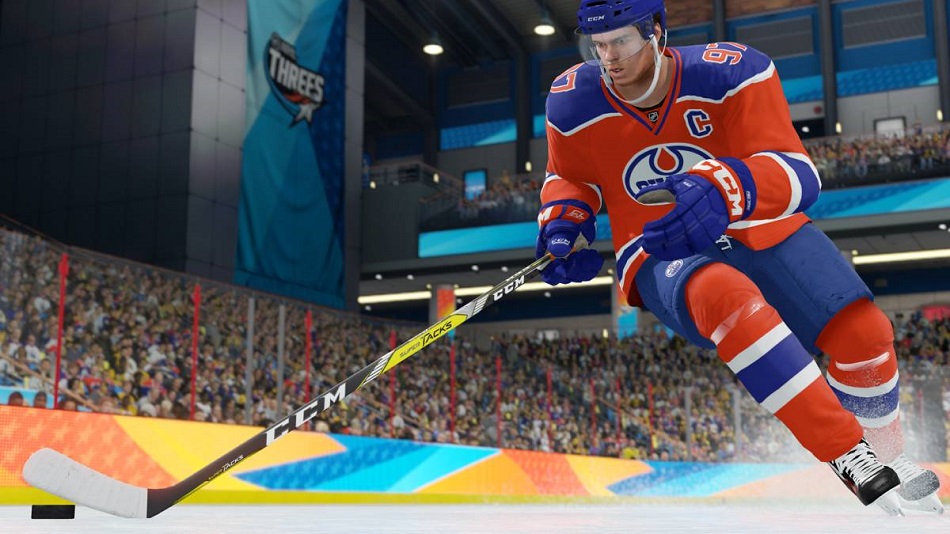 Finally, there’s the silly bonus addition of “Threes” which is just that – a big-headed 3-on-3 mode that plays a lot like NHL Arcade on the Xbox 360. This simplified bonus mode is a throwaway time-waster, with a loud-mouthed announcer and a load of visual fireworks, though it maintains much of the core NHL gameplay. Speaking of which, that very gameplay remains as solid as ever in NHL 18. However, it also retains many quirks from years past.

On ice, despite characters generally feeling weighty and fluid, I still experienced floatiness — especially when defending against breaking opponents. In these moments, I found myself flinging players in the direction of skaters in hopes of making contact and breaking up a play. It’s not a sustainable approach, but the frantic back-and-forth nature of videogame hockey means it’s rare for players to stay properly aligned on defense.

Offensively, NHL 18 remains strong – a slightly slower pace to this edition results in more measured offensive attacks, and more frequent center-ice passing, rather than just employing a strict diet of breakaways and brute force shooting. Thankfully, EA also keeps nostalgic gamers in mind, and retains the 1994 ‘two-button’ control options in addition to the thumb-numbing stick control, and there’s also a hybrid of both. Any player will find something to fit the bill here.

Throughout even the most intense on-screen action, players remain well-animated, with no graphical hiccups or slowdown – even when online. EA never skimps on visual presentation, and NHL 18 is no exception. Between the player models, arenas and NBC Sports branding, this is as authentic as video sports get.

NHL 18 brings back its most popular modes for another round this year, with Franchise remaining the primary reason anyone should own this title. Players can take control of the entire league, adjusting every last management detail to suit preferences. In addition to the standard salaries, team movement and player morale monitoring, franchise owners can now engage in mid-season contract extensions and other fan-friendly actions to improve attendance. This seems like a lot to balance, but NHL 18 manages to seamlessly weave managerial decision making with on-ice play (should the player choose to actually play hockey, that is) in a way that never becomes cumbersome. For the umpteenth year in a row, Franchise is the shining star of NHL.

The popular online EASHL returns, and is a highlight of the package as it adds more liberating (and controllable) 3-on-3 play, allowing teams to be more cohesive and fluid than online 5-on-5 play ever could. Happily, lobbies were crowded and fast, with no problems getting into games or maintaining connection during them. Gameplay is largely identical to offline – a tip of the cap to EA for ensuring this title worked at launch, rather than requiring the usual array of patches. 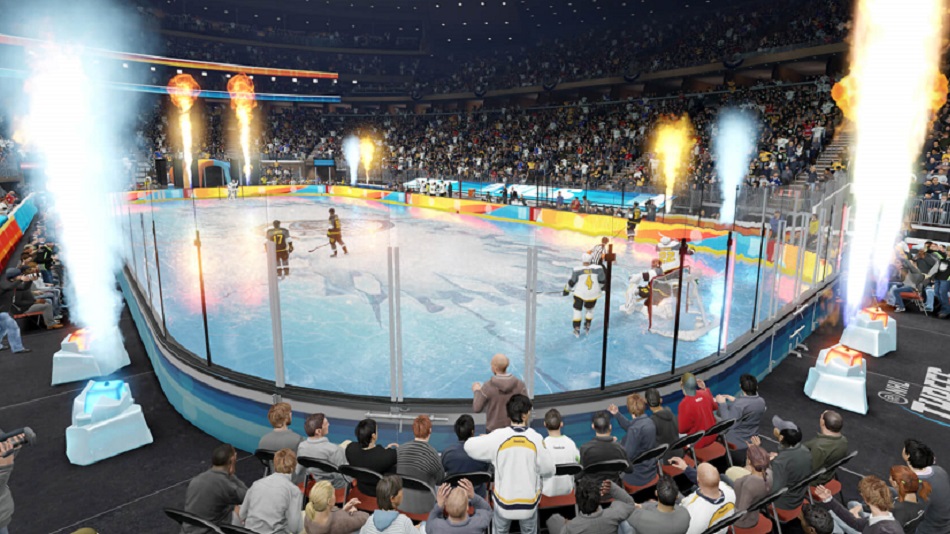 Unfortunately, the other modes either remain stagnant or lag behind other EA titles. The card-based Hockey Ultimate Team returns this season, and once again, players will be tasked with building rosters, buying new card packs and skills to put into action on the ice. A few years back, this was a novel concept, but I’m personally requesting sports game developers introduce something other than card-swapping and hoarding as an alternative to regular digital sports. If cards are that important, players should buy Gwent.

Most disappointing is the redundant Be a Pro mode which is identical to previous editions, asking players to create a young draftee and prove themselves on the ice through choppy and awkward line shifts. Whereas EA took Madden and FIFA modes to new levels of cinematic, emotive storytelling, NHL 18’s Be a Pro is nothing more than a part-time player simulator where inexperienced players will find themselves skating in circles trying to get veterans to pass the puck. EA’s other career modes are corny and overdone, but they also offer unique, engaging ways to enjoy those titles’ core gameplay. By comparison, Be a Pro feels antiquated and unnecessary. With the broad international appeal of hockey there are certainly plenty of underdog stories to tell, and EA missed the mark by not giving it a shot in NHL 18.

Interestingly, I think Be a Pro is representative of NHL 18’s larger problems as a whole. While Madden is only competing against itself each season, the brand is so vital that there’s a drive to improve and innovate with every edition. In comparison, FIFA is now facing serious competition from Konami’s revitalized PES, so the need to innovate there is crucial to future success. Heck, even EA’s much-maligned NBA Live has finally righted the ship, and might put 2K on its heels for the first time in ages.

However, NHL remains a somewhat forgotten property. Though NHL 18 is a solid, enjoyable title that will likely appeal to old and new hockey game fans alike, there’s little innovation on display — the developers only deliver minor improvements and necessary tweaks. In order to make the series relevant again, EA needs to find a way to revolutionize the gameplay. It pains me to say, but it’s not 1994 anymore and expectations have changed. As much as I enjoyed my time with NHL 18, I would rather see the series get benched for a few years and come back with something truly new rather than another installment of more-of-the-same. Rating: 7 out of 10

Disclosures: This game is developed by EA Canada and published by Electronic Arts. It is currently available on PS4 and XBO. This copy of the game was obtained via publisher and reviewed on the Xbox One. Approximately 15 hours of play were devoted to the various single-player modes, and the game was not completed. Two hours of play were spent in online multiplayer mode.

Parents: The ESRB rates this game as E10+ for Mild Violence. The ratings board says: In this hockey simulation game, players can select teams from NHL rosters and play realistically depicted games of hockey. During the course of each match, players may initiate brief fistfights; the perspective shifts to isolate two players throwing punches and grabbing at one another until the fight is broken up.

Deaf & Hard of Hearing Gamers: There is currently no closed captioning for in-game commentary. However, the game features optional tactile feedback and onscreen prompts throughout all modes, and is otherwise fully playable for gamers who are deaf or hard of hearing.

Remappable Controls: The game features a series of preset control schemes but the controls are not fully remappable.