As good as a colonoscopy 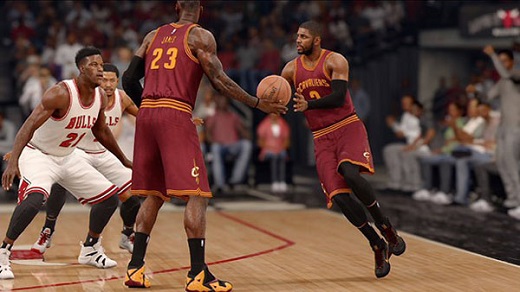 HIGH It's light years ahead of NBA Live 15, in every way possible…

LOW … so is a colonoscopy.

WTF Based on the audio, it's not uncommon for everyone to leave the arena mid-game, including the announcers.

I wanted to love this game. I really did, but after 10 or so hours it just wouldn't let me. However, I did walk away from the experience passably satisfied and entertained, which equates to (I guess?) a landmark victory compared to Live 15.

Upon first glance, it's clear EA Sports put a lot of focus into the visuals. While previous incarnations of Live were no graphical slouches, rough animations, awkward transitions and strange "waxy" player models took the user out of the experience. This year, they upped their game—Live doesn't look nearly as good as its competition, but it's not cringe-inducing, either.

It should be noted that seemingly only half of the current NBA was scanned in time for the game's release. While superstars like LeBron James, Carmelo Anthony and Anthony Davis look spot-on, don't expect your benches to carry the same realistic details. And, if you're looking for accurate rookies, squint your eyes. It's the only way the graphics will reflect real life. Knicks rookie Kristaps Porzingis was a notable standout for not resembling him in the slightest.

The rest of the presentation is steeped in ESPN branding and has a top-flight TV feel. Watching the close-ups and replays is exciting, and—barring the times when the games animations falter—they do a bang-up job of recreating an actual NBA event. Unfortunately, those mistakes occur more often than one would expect from EA, and before long, users will find themselves turning off replays to speed up the game.

While the visuals do all right, the game's audio is a MAJOR concern. At any given moment—usually when making player substitutions—the background effects disappear entirely. I'm not talking about squeaky shoes and air horns, mind you. The entire background sound is completely muted, so all that's heard is on-court player chatter without music, cheering, commentary or arena music. Some might be fine with this, but hearing locker room trash talk in an otherwise dead arena is unacceptable, especially on a game so deep into the current hardware lifecycle.

On the court, NBA Live 15 is much-improved. Players no longer feel as if they're floating above the floor, body contact has impact, and the ball feels like something with actual weight. Controller response is far better than previous current-gen editions of Live, with the player rarely feeling as if his/her input isn't connecting. Make no mistake, this isn't airtight and there's a ton of room for improvement, but Live finally feels like a modern sports sim. That's enough to provide hope for next year.

Unfortunately, the button-based interface feels dated and cumbersome, especially when the 2K series has made the analog stick controls practically second nature. I repeatedly found myself flicking the sticks to no avail, in hopes of generating some on-court response. At this point, an analog gameplay scheme might seem like old news, but it would likely help EA gain some ground with gamers preconditioned to 2K's effortless controls.

In terms of modes, Live offers a full slate of features including their take on a story mode, called Rising Star. There's nothing really new to report here—create a player, go through a simulated draft and work through the season-long grind to NBA glory. Along the way sponsorship offers come in, there are several ways to improve stats, and a spot in the starting lineup is earned… But this mode lacks one thing: drama.

While 2K uses its MyPlayer mode to tell melodramatic, ham-fisted tales about unappreciative stars, it still manages to capture our imaginations year after year. Players genuinely care about the fates of their doppelgangers, creating an addictive "one more game" quality that's rare in traditional sports sims. Live misses the mark and needs to create a compelling narrative if this mode is to continue in future iterations.

The rest of the game's modes are standard-issue season, quick play and online modes. Online play, in particular, is vastly improved, with the Live Pro-Am mode showing tremendous promise. This game of pick-up shows more personality than the rest of the title demonstrates on any level. The actual online play is smooth, lag-free and enjoyable. If only there were more people populating the online courts.

In the end, NBA Live 16 is not a great game, nor is it recommended above this year's 2K edition. In fact, it's not even good in many aspects. That said, NBA Live 16 is head, shoulders and ruptured spleens ahead of EA's last roundball offering. The series' major downfalls—quirky gameplay, inconsistent graphics, awkward physics—have been addressed to a degree, and it's definitely playable… But we don't live in a sports game world where "definitely playable" is a testimonial. Gamers expect authentic sports experiences from head to toe, and a flawed-but-functional title just can't compete for their hard-earned cash when 2K's bulletproof NBA title will set them back the same sixty bucks. Rating: 5 out of 10

Parents: According to the ESRB, this game is rated E for Everyone. There is nothing that could be deemed offensive by parents, except for the cost of in-game purchases, which may bring the user considerable amounts of swag, but no real reward.

NBA 2K certainly isn’t “bulletproof”. For a amateur like me it’s WAY too difficult to learn. I’m sure the so called “dated” NBA Live control scheme is a lot easier for me to work with.