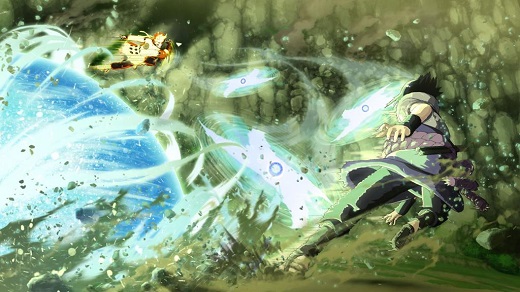 HIGH An absolutely gorgeous replication of a deep anime universe.

WTF  I'm a kickass ninja saving the world. Why am I fetching cats?

Full disclosure: My understanding of anime and manga, much less Naruto specifically, is limited to game releases and my friends discussing their favorite moments. As such, I'm no expert, but I volunteered because I wanted to approach this review without letting fandom color my evaluation. Thankfully, the developers at CyberConnect2 realize not everyone runs a Naruto wiki, so they designed Ultimate Ninja Storm 4 with a larger audience in mind.

In just about every way, they succeed.

Naruto Shippuden: Ultimate Ninja Storm 4 (hereby referred to as Naruto because, you know, carpal tunnel syndrome) brings fans and newbies together in grand fashion through an extensive introduction to the universe, its characters, and the overall storyline. Unlike so-o-o-o-o-o-o many other fighting games, I actually knew why these battles mattered, and it drove me to play further. There aren't many other brawlers I can say that about.

The first mode players—especially newcomers—should attack is Naruto's extensive Story section, which serves as the narrative spine for the rest of the modes.

The plot of the Fourth Great Ninja War is delivered in thorough, elaborate detail, with frenetic pacing and memorable boss battles throughout. It's occasionally overblown and corny during some of the lengthy cut-scenes, but beyond these moments it's a fully-fleshed story well worth seeing.

Once the 20 or so hours of Story mode come to a close, the game still has still tales to tell thanks to Adventure mode adding an RPG-lite element. Whether players are taking characters through a landscape completing fetch quests, or hunting down collectible "Memory Fragments" that let them relive Naruto's past battles, this mode is both leisurely and engaging. Though the "walk-talk-fight" structure won't make anyone forget The Witcher, this content is more than just an excuse for random battles.

Beyond these modes, Naruto offers a wealth of options, from regular fights to tournament and league battles. These insane brawls are full of digital pyrotechnics, and are better with friends (as nearly any fighter is). But, solo gamers will still find plenty to enjoy in the deceptively deep mechanics.

To master Naruto, players can spend time in Free Battle mode, which teaches basic strikes and projectile attacks, but also covers how to leverage a regenerating Chakra bar for devastating ninjitsu techniques. Button mashers and fighting rookies will do just fine, but there are serious benefits to approaching every battle tactically.

Online modes are a mixed bag. Standard ranked and player matches work well, with hardly any lag or latency when compared to offline play. However, matchmaking is an absolute nightmare, as it's both slow and inaccurate. Too often, it would take several minutes before I was placed in a match, only to find I was outclassed by severely skilled competition. It's not inherently broken, but I'd say Naruto's best experiences are offline, which is a bit unusual for a fighter.

The only other complaint—and at this point, I'm splitting hairs—is that QTEs (quick-time events) remove control from the player during some of the most intense moments. In a title so fluid and responsive, resorting to simplified button-matching seems unnecessary, even if the resulting spectacles are impressive.

In the end I found Naruto to be a great experience, and also developed an appreciation for the series. I may never cosplay as any of the characters, but over the course of the time I spent with the title, I found myself engrossed in the story and loving the frantic ninja warfare. When the next Naruto is released, I don't think I'll need an opening disclaimer. Rating: 9 out of 10

Disclosures: This game was obtained via publisher and reviewed on the Xbox One. Approximately 22 hours of play were devoted to the single-player mode, and it was completed. Another 4 hours were devoted to online play.

Parents: This is an adventure-fighting game in which players engage in one-on-one and group battles against characters in the Naruto Shippuden franchise. Some sequences depict blood-splatter effects as players defeat ninjas and/or attack giant enemy creatures with swords. Cut-scenes depict additional acts of violence.

Deaf & Hard of Hearing: There are subtitle options, so gamers who are deaf or hard of hearing can easily follow the storyline and on-screen instructions. This environment is rich with environmental and gameplay sounds which enhance the experience. But there is nothing that would prevent deaf and hard-of-hearing gamers from enjoying the game in full.