This One Could Go… All… The… Way 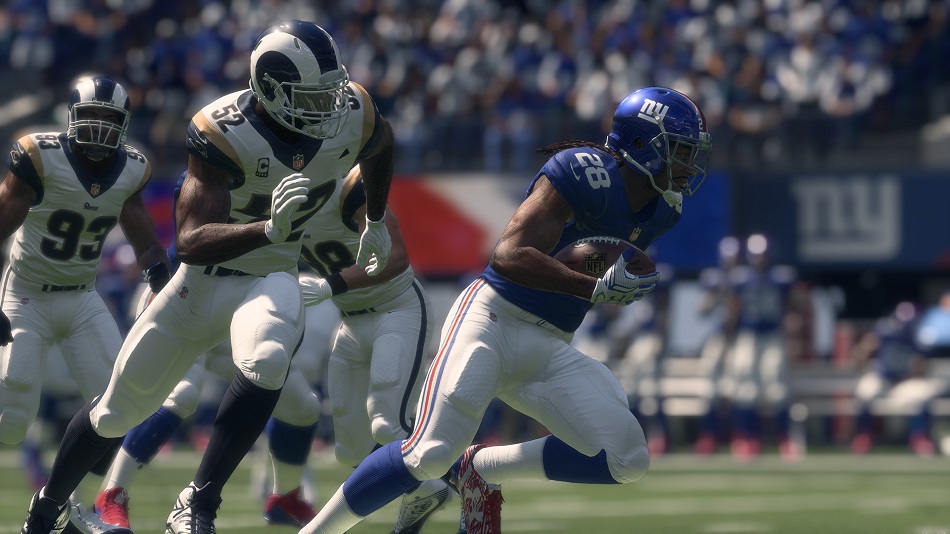 HIGH  Frostbite engine meets football weather? It’ll be a showcase on the One X.

My wife jokes that the only reason I love reviewing Madden NFL titles is because their release indicates my kids will soon be going back to school. While she isn’t wrong, I also love reviewing – and playing – Madden NFL titles because whether they make modest improvements or wholesale changes, the games never stop being enjoyable. Occasionally, they do some truly awesome things. As such, I’ll say it from the top: Madden NFL 18 is a fantastic game.

No, it’s not perfect. And yeah, some of this year’s missteps could have been avoided. But unlike so many titles in my game library, I KNOW I’ll still be playing Madden NFL 18 six months from now. In fact, I’ll probably play it until 19 comes rolling through … when my kids head back to school again.

There are two major upgrades to Madden NFL 18. First and foremost, this year marks the first time digital NFL football will be rendered using the vaunted Frostbite graphics engine, and what a difference it makes. Though I rarely make visuals the centerpiece of a review, Madden NFL 18 is far and away the most realistic depiction of professional American football ever made. How good? This version fooled my wife into thinking actual football was on. More than once! And when I changed camera angles, the overall broadcast quality only enhanced the illusion.

Using Frostbite has improved all aspects of the visuals — everything from animations to collision detection, to the realistic movement of jerseys and authentic degradation of field conditions. These elements were all present in previous editions of Madden NFL, but always seemed to be eye candy rather than the actual result of my actions. This feels altogether more real.

Collision detection is probably where Frostbite matters most, since last year’s improved focus on the running attack continues, and using ground plays is much more effective (and unpredictable) than in the past. While savvy gamers always seem to find those “money runs” that can elude any defense, I can’t seem to hack Madden NFL 18 defenses in any way. In fact, on several occasions, I ran the same play against the same team defenses, and got wildly different results. Thanks to the engine’s more fluid, responsive player control, runs are much more easily adjusted on the fly, and the animations don’t seem to be canned.

While EA’s Infinity engine was certainly no slouch, the amount of detail is displayed with a higher level of sheen than ever before. I cannot wait to see this title running in 4K when the Xbox One X hits the streets this fall. 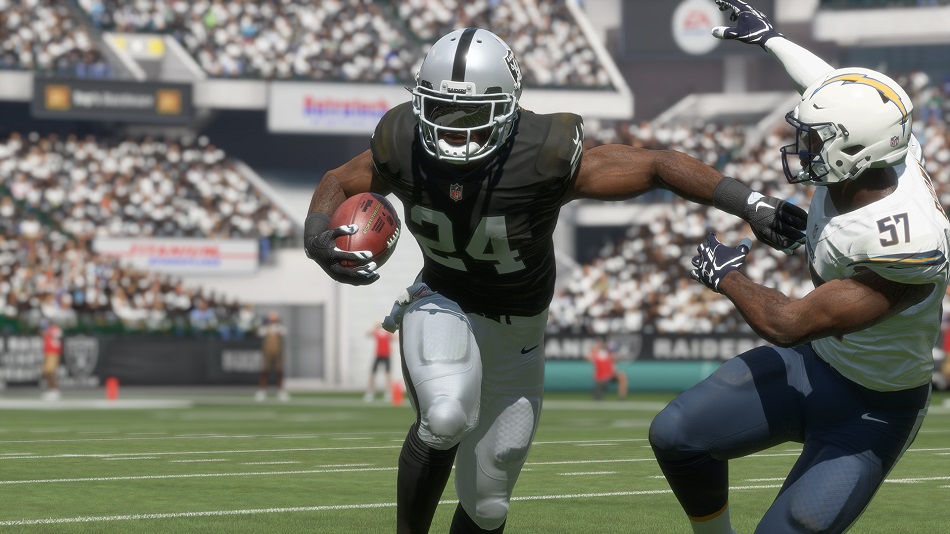 The presentation improvements don’t end at the visuals. This year’s combination of play-by-play man Brandon Gaudin and analyst Charles Davis is fantastic. There’s a good balance of banter, analysis and realistic response to on-field action that makes this feel more like a true televised broadcast, rather than a series of canned soundbites.

Madden NFL 18’s second big addition is the introduction of Longshot, its version of the now-standard story mode. EA first introduced this mode in FIFA 17 and it was an overall success, with some room to improve. Madden’s version? Well, it’s mostly a win… at least from a presentation and storytelling perspective.

When launching the mode, players get some establishing shots of a sleepy Texas town followed by a brief interactive cutscene that lays the groundwork for the protagonist, Devin Wade – a high school football standout and college flameout, thanks to some personal traumas he couldn’t escape. Told through a series of well-produced (if not a little over-acted) flashbacks, we learn that Wade needed some time away from the game he loved, and is now ready to make his way back to the spotlight. It turns out that one way he can return to gridiron glory is through a reality/game show that promises the world to former college stars. I won’t ruin the story for you, but know this – it’s engaging, and will hook most players for the duration of its eight hours.

However, gamers might as well make some popcorn and lean back on the couch, because despite being an interesting story, there’s little gameplay here. Instead, Longshot is best described as “Telltale Games presents Remember the Titans.” By that I mean there are a series of interactive QTEs and other decision/dialogue-based activities that all determine how Devin’s player ranking and public perception will evolve. Some of these are well-implemented, but many of the activities are poor – particularly one section that requires the player to hit moving targets without ever explaining the mechanics. It’s not typical Madden controls, which threw me for a loop more than once.

I played all the way through Longshot, and genuinely cared about the story of Devin Wade, but I do wish EA had made more of the progression about actual gameplay, like the company did with FIFA 17. Still, this is a nice addition to the usual online and offline modes.

Getting back to football, Madden NFL 18 has a boatload of modes and play types. Arcade is just that – high -scoring, circus catches, and tons of highlights. Simulation is focused on matching performance with realistic NFL expectations, based on numbers. Competitive is an interesting take, as it makes the game react as the best online Madden players would, making it the most difficult, challenging way to play.

I’m glad EA made these categories clear because Madden NFL 18 isn’t nearly as easy as previous editions. With great power comes great responsibility, and the increased amount of control gamers have means they are ultimately more responsible for what happens before, during and after the ball is snapped — no more winging the ball downfield and hoping the digital guy catches it. In the two sim-focused modes, players will need to accurately time throws, jumps, and maneuvers in the air to ensure they come down with receptions. 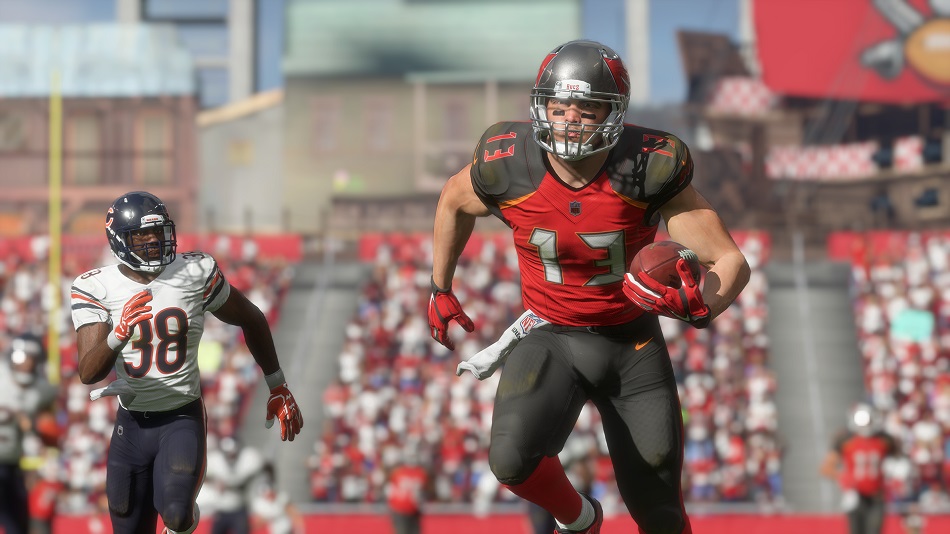 In addition, EA Sports has added a new control scheme known as Target Passing which allows quarterbacks to throw around defenses by setting a throw location target and trying to sneak behind sticky defenders. It works well with high-rated quarterbacks like cover-boy Tom Brady, but lower-ranking passers are better off sticking with open receivers. Though this isn’t as cumbersome as the ‘cone passing’ tool from a decade ago, it can be overly complicated in the heat of play.

On the ground, similar rules now apply. Whereas the running game was once focused on brute strength and well-timed jukes, every step matters here. A powerful lunge toward a closing gap will make it more difficult to adjust when it closes, meaning those jukes and jumps will be much less effective as a result.

On defense, the game still allows switching between players or locking down on manning one position, but there was nothing wrong with past versions of this, and Madden NFL 18’s defensive prowess is still good here. Players who don’t like defense can stick to offense-only, or big-play only through scene-skipping. It often feels like cheating, to a certain extent, but it also allows gamers to maximize their time with Madden – pretty handy for intense dorm room tournaments or for guys like myself who simply don’t get to game everyday.

Players can also choose from the usual slate of annual modes – training/practice, play now, online and offline franchise mode (as a player, coach or general manager), online head to head or league play, etc. They all play as expected except for the online portions, which I was unable to review at press time due to servers not being activated. Additionally, franchise mode now includes a ‘cloud franchise’ option which I suppose ensures system disasters don’t affect saves and progress. That said, I also worry that server problems could make players unable to access their saves.

Finally, there’s the “love it or hate it” Madden Ultimate Team (MUT), EA’s entry into omnipresent card collection modes. Here, players will build and update a fantasy team from player cards which can be had through game progression or – for the terminally impatient – real-world cash transactions.

This season, MUT introduces a ‘Squads’ cooperative online team mode. Here, players choose a role – head coach, offensive captain, and defensive captain – and play out their respective tasks in full. This mode requires strong communication and collaboration to make sure things work. In a nice touch, MUT also includes a Longshot-themed selection of cards, which allow players to participate in separate Longshot challenges and scenarios. Though these don’t differ much from standard Madden scenarios, it’s a nice way to extend the storyline into the overall experience, and I look forward to seeing how this feature is fleshed out as the game is updated.

In the end, football fans can’t go wrong with Madden NFL 18. Yes, there are a few hiccups, such as the lack of interactivity in Longshot and a steeper difficulty curve for newcomers, but none are related to the core gameplay mechanics which improve year over year. The visuals are stunning, the animations are more lifelike, and the level of control in the passing and running game is unparalleled. Though EA Sports is only competing against itself in terms of the NFL, they continue to evolve. Rating: 9.5 out of 10

Disclosures: This game was developed and published by EA Sports. It is currently available on PS4, and Xbox One. A review copy of the title was obtained via publisher and reviewed on the Xbox One. Approximately 20 hours of play were devoted to the single-player modes. Online servers were not active at the time of review.

Parents: This game is rated E for everyone by the ESRB, with notes of Comic Mischief, Mild Language and Mild Violence. For the sports simulation sections of the game, I found nothing objectionable for players of any age, with the exception of those who might be sensitive to the physical nature of football. In the story mode,  there is no profanity or other objectionable characteristics, though the storyline’s darker themes of depression and loss might be too much for younger children to process.

Deaf & Hard of Hearing: The game uses some audio cues to reflect onscreen action, but these are not necessary to play and enjoy the game. The game offers tactile feedback through controller vibration, and when turning off the sound, the gameplay quality did not diminish.