"Next year" is finally here… 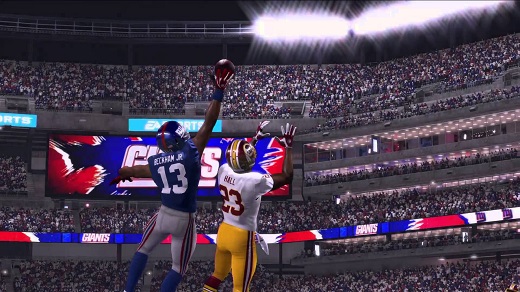 HIGH: The new pass placement and receiver mechanics are the best series additions since the magic stiff arm of Madden '97…

LOW: … and the Dynamic Drive Goals feature is the worst.

WTF: Jim Nantz and Phil Simms have the collective personality of a dial tone.

If there's one constant in sports gaming, it's the ongoing hope that "next year" will be the year a franchise works out the bugs, tunes up the features, and finally delivers a realistic, immersive experience. But very rarely does a game accomplish this, as for every NHL '95, there's an NHL 15.

In fact, outside of 2K's sterling NBA games, sports gamers endure an annual ritual of wondering "what if?" rather than enjoying the game they're currently playing. Well, these fans can rejoice because NFL 16 might very well be the definitive version of Madden, and it's the best iteration since the series got rid of passing windows.

When first booting Madden NFL 16, EA takes players right into the action via its now-expected intro scenarios. This year, we're treated to the Pittsburgh Steelers and Arizona Cardinals, but make no mistake, the inspiration behind the game's new features plays for the New York Giants. Yeah, it's pretty clear that this year's cover boy—Odell Beckham Jr.—is there for more than just box art.

Beckham, known for his amazing array of acrobatic circus catches, inspired EA Tiburon to reevaluate the level of control players have over catches. You see, despite 20 years of annual updates, the core gameplay of Madden NFL hadn't wavered: Snap the ball, choose a receiver by pressing a corresponding button, and wait for the ball to land.

Sure, there were some new levels of interaction added over the years. Taking control of a receiver, jumping for extended reach, and even controlling routes were introduced in recent editions. But ultimately, these modes were enhancements, not improvements.

In comparison, Madden NFL 16 is a true evolution. Now, users can make post-snap adjustments to aim passes high, low or wide toward a selected receiver. Then, in a swift moment, the options change to adjust how a receiver fights and positions himself for a catch.

To summarize, lob passes now have increased effectiveness, outstretched arms offer more control, and the days of "chuck and pray" are long gone. If players throw a bad interception, there's no one to blame but themselves. In turn, player ratings take on much more meaning this time around. Whereas the game once demonstrated a highly-rated receiver by making his digital hands stickier, the in-game Beckhams and Edelmans now have improved abilities by way of these new mechanics, and it's a level of interaction that entirely changes the post-snap dynamic. Users don't ever have to use these tools, but once they do the experience feels naked without them.

Sadly, this tremendous advancement is coupled with a new feature that misses the mark completely—Dynamic Drive Goals. With this feature activated, in-game play is "enhanced" by specific goals similar to Achievements or Trophies.

For example, while playing with the Browns, the game might offer an XP boost for completing six consecutive passes with Johnny Manziel. Or, the game might reward users for running three successive plays with the same running back.

Now, I know I'm new to Gamecritics, but here's something readers will hear from me more than once—no sports game achievement, trophy, level upgrade or bonus item should ever require users to play the game outside the nature of the sport itself. Real NFL teams would never run the same play six times in a row, nor would they run down the clock by ending the game with consecutive first downs. This addition is unnatural, distracting, and the only black mark on an otherwise-stunning package of gameplay and visuals.

Technically, online play is much-improved and the servers keep things moving at a rapid clip. There was usually only a minute or two between choosing a lobby and kicking off, and in-game play was lag-free. The only hiccups I encountered came from a sore loser rapidly pausing and restarting, trying in vain to get me to jump offsides.

Aesthetically, the look and feel of Madden hasn't changed too much from last year's edition. However, graphics are brighter and smoother, and much of the shimmering has been removed during camera pans. Likewise, player faces and uniforms are sharper and more accurate, and animations don't seem as unnaturally pronounced.

Speaking of animations, this season's upgrades bring some much-needed diversification to the running game. Now tailbacks will roll, dodge and break tackles more fluidly than ever, while tackle animations aren't nearly as over-the-top as previous editions. And quarterbacks—long saddled with awkward release animations—now toss the ball more naturally, with player-specific gestures in tow.

While the animations are good, the audio continues the series's legacy of sub-par performance. The commentary team of Jim Nantz and Phil Simms would have been better suited for EA's latest golf game, and players will hear most of the unique quips numerous times early in the season. What's missing is the level of conversation that real analysts have, including historical and topical statements. Most players I've interacted with tend to mute the commentary, and this game doesn't give much reason to change that pattern. That said, one only needs to look at the FIFA series for a lesson in how to pull this off.

Despite a handful of missteps, the sheer immersion of Madden NFL 16's gameplay makes this the best football video game since the series's salad days, and the most improved football experience since NFL Gameday first graced the PS1. I realize this is a lot of hyperbole for what many expected to be another annual update, but after years of waiting, "next year" might finally have arrived for enthusiasts, and it arrived in grand fashion. Gamers who usually wait to buy annual Madden titles, this is the year to finally stop asking "what if?" Rating: 9.5 out of 10.

Parents: According to the ESRB, this game is rated E for everyone. Online interactions are not rated, but based on what my multiplayer opponents had to say about my mother, parents should use caution before allowing children to play online.

Deaf & Hard of Hearing: The game's audio (commentary, music and sound effects) are a key portion of the game. While force feedback and vibration enhance the experience and the on-screen prompts accurately move the game forward, there is distinctly less immersion for gamers who are deaf or hard of hearing.

It’s interesting that you think the ball-in-flight adjustments that were added this year take the game up a notch – as someone who struggles with the dozens of adjustments already available, I’ve largely ignored these, and turned off the behind-the-ball camera. I’m aware that it limits my game, but I’m happy to stay more vanilla and try and win through subterfuge on D, etc. Agree that the Goals are an abomination, and our online franchise has insisted they be turned off. EA give you the option to do that, and generally play your own way, which is good. Overall the… Read more »