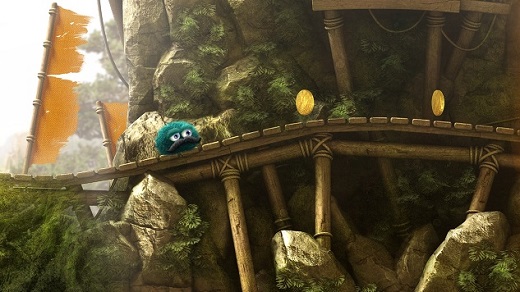 HIGH: Absolutely stunning graphics. How did this start as a mobile game?

LOW: It's one minecart short of being a platform parody.

WTF: Someone on the dev team said, "You know what this inflatable bathmat needs? Ron Swanson's mustache."

I can only imagine the initial creative meetings for Leo's Fortune. I visualize a group of indie game hotshots sitting around a table, coming up with a concept for the world's next killer platformer.

"Someone close to him is stealing his gold coins, yet leaving them in a straight line through nonsensical environments."

"He will have a distinguished voice and be subjected to physics, insta-deaths, and countless side-scroller tropes for a few hours of game time. And, he's got a boss ‘stache."

Okay, maybe I'm dumbing it down a bit, but Leo's Fortune is a brief, beautiful, yet derivative journey down gaming's memory lane. It's also a great time, in spite of itself.

Right from the outset, users know what they can expect. After a brief intro complete with melodramatic narration, the threadbare plot is apparent: The protagonist is a fuzzy blob named Leo, and someone has taken his sizable fortune.

As the story unfolds, the user is given obvious clues as to which members of Leo's unscrupulous kin is responsible for the theft, slowly turning Leo's indifferent, mustachioed countenance into something slightly more perturbed.

But that's about it. Other than mild crankiness and a few rambling monologues, gamers won't spend much time getting to know Leo, or his reason for floating through the game's bite-sized levels.

Though it's a minor quibble, Leo's lack of emotion is indicative of a larger issue in the game—despite stunning graphics and environments, Leo's Fortune lacks any sense of urgency or personality. The game looks and plays beautifully, but users may often find themselves asking why they should care. If Leo is only mildly put off by his stolen gold, what's the gamer's motivation for finding it?

The reason, as it turns out, lies in the rock-solid controls and just-creative-enough gameplay.

Leo's Fortune began life as a popular mobile game, and like so many of today's post-Angry Birds titles, the predominant control scheme is based on realistic physics. As realistic as a floating furball can be, anyway.

Controlling Leo is a breeze (no pun intended). Using only a few buttons, gamers float Leo through a range of labyrinthine levels, avoiding environmental traps through an innovative "puff and release" floating mechanic. By the middle of the training level, even the most inexperienced gamers will have Leo accelerating through rows of coins, powerfully descending, and dodging spiky wheels with ease.

Of course, each of the game's 24 levels has a unique theme, culled from the annals of gaming lore. Leo will jump to platforms, float underwater, break boxes, flip levers, dodge spikes, blades and wrecking balls, and even be chased by lava. It's so derivative that users can practically hear the developers' tongues lodging in their cheeks.

That said, Leo's physics bring new flavor to time-worn tropes. And, considering the brevity of the game, none of the levels outstay their welcome or become tiresome. The only gaming cliché to interfere with enjoyment is the inclusion of far too many instant deaths before tricky puzzle sections. In 2015, regardless of genre, gamers should be penalized for lack of skill, not because the game forces them to die in order to learn the terrain.

Still, this is a harmless, largely mindless title that serves as a good platforming distraction for fans of the genre. Just as Leo's quest begins to feel a touch redundant, the jaunt is complete and the mystery is resolved. No muss. No fuss. No worry.

For a two- or three-hour game with an asking price of $7, Leo's Fortune might seem a bit overpriced, but throughout the journey I found myself enjoying the controls, the well-placed puzzles, and yes, even the nostalgic gaming environments. I can't tell anyone what to do with their online currency, but considering people spend countless dollars on avatar clothing and custom-painted digital shotguns, there are far worse ways to spend seven bucks than on this enjoyable, well-made platformer. Rating: 7 out of 10


Disclosures: This game was obtained via publisher and reviewed on the Xbox One. Approximately 4 hours of play were devoted to the single-player mode, and the game was completed. There are no multiplayer modes.

Parents: According to the ESRB, this game contains mild fantasy violence, though I'm not really sure how many children will be traumatized by a green dust bunny succumbing to a spiky wheel.

Deaf & Hard of Hearing: The game's music, voiceovers and sound effects bring subtle emotion to the game, but hardly change the experience. There are subtitles to ensure the story moves along for all who play.