A Gigantic Amount Of Enjoyment 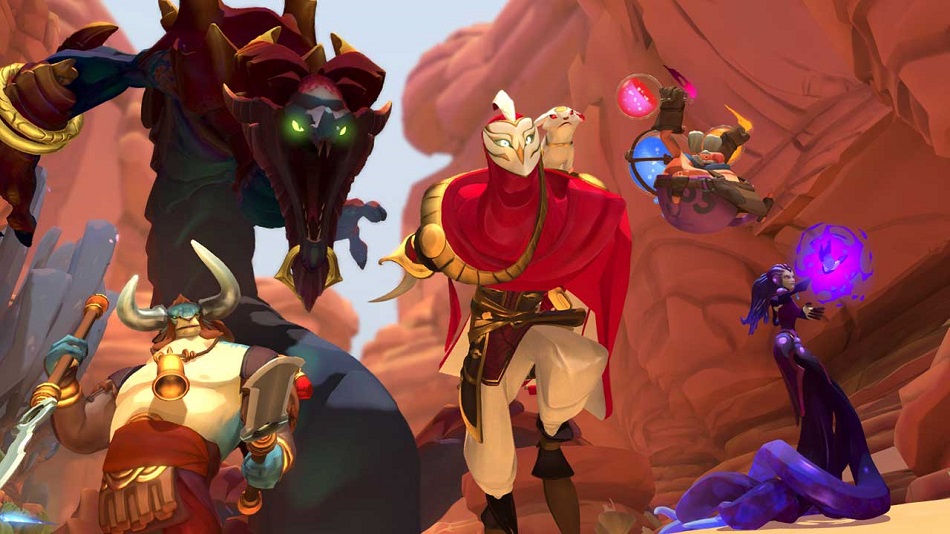 HIGH Tight controls make complex attacks a breeze, even in the most chaotic battles.

LOW After countless beta time, this amount of downtime between matches is disappointing.

The hardest part of writing game reviews is the opening sentence. This problem is compounded tenfold with a game like Gigantic because even days after playing it, I’m still not 100% sure how to describe it. But, regardless of how people choose to approach this free-to-play gem, it’s one of the most enjoyable multiplayer experiences I’ve had in some time.

Borrowing liberally from other free-to-play RPG/MOBA entries, Gigantic is a class-based shooter at heart, with a strong dose of Overwatch-esque combat, and more than a little tower defense in its bloodstream. With unique characters, abilities, and a well-implemented summoning system, Gigantic’s bright, candy-colored 5v5 battles aren’t flawless, but they are memorable.

After launching the game, players can choose their characters from a lengthy list. However, full disclosure, the developer gave me an Ultimate Pack upgrade for this review, so I was able to sample all of the diverse warriors on the roster. Because it’s free-to-play, the options at the start can be limited for those who don’t buy in. Though 19 of the 24 listed warriors are available from the start, the game randomly rotates which ones are playable at any time. Also, since there can only be one of each character type in matches, these options feel a little more limited without an unlock.

Regardless, there are many fully-fleshed characters to accommodate any style of play. From speedy assassins to ranged shooters and melee specialists, those who approach Gigantic as a straight-up shooter will find more than enough power and variety. In turn, RPG fans will enjoy the presence of summoners, healers and other support characters to round things out since diversity is key to success in these online battles. Shooting is encouraged and rewarded, but teams composed entirely of offense-focused characters will quickly learn that wars are fought with brains as much as brawn.

After selecting a character, the tutorial explains the base play concepts of harvesting power and destroying all comers. When enough power is accrued, attack and defeat the other team’s Guardian — an enormous beast with very obvious weaknesses. Naturally, the opportunities to attack the compromised Guardians are limited, and the small time windows give these battles a sense of urgency and gravitas.

Because the battles can be lengthy, players have the ability to summon support creatures which give distinct mid-battle advantages such as safe spots for healing, and even temporary “radar” detection of the opposition’s location. These summoned characters are available at specific points on the map and using them never feels cheap or overpowered. 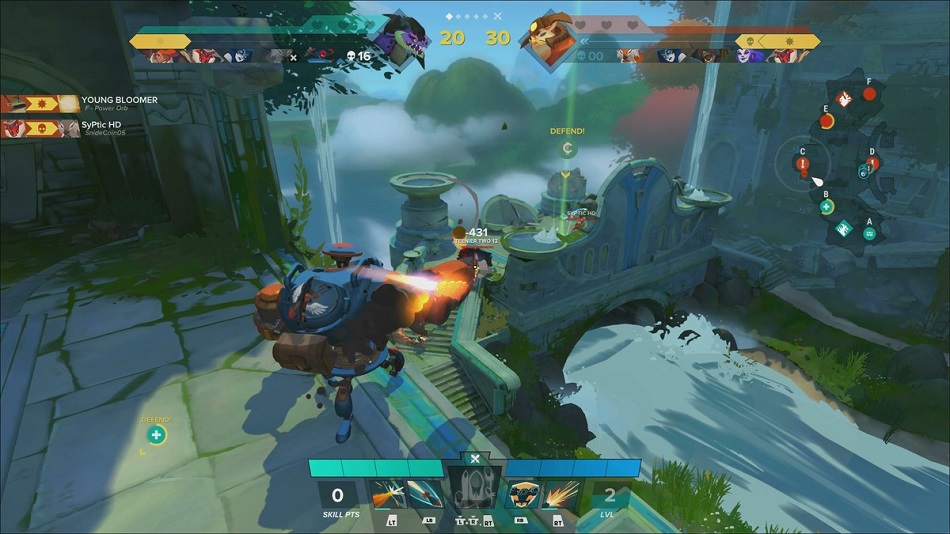 One issue I noticed during play was that when a team can’t accrue enough power to initiate the attack against the opposing guardian, Gigantic becomes a game of defend and regroup — this is where having a balanced team of characters comes into play.

An assault-only approach will leave teams vulnerable and struggling to stay healthy in the long term, but on the other hand, overthinking a strategy instead of shooting when offense is necessary will leave players without any ability to build momentum. Interestingly, there are mid-match character modifications that can change the overall potential of a character. For example, there’s a handful who begin as melee/short-range attackers, but quickly gain longer-ranged attacks to shift the balance.

Visually, Gigantic’s bright, almost electric colors and whimsical character design aren’t for those who enjoy more visceral violence, but they’re well-done here. The environments are sharp, characters and attacks are well-animated, and overall the game is appealing. It’s also worth noting that while there are a lot of buttons involved in the heat of battle, there were few instances where I resorted to desperate mashing, or struggled to execute my team’s attacks. The control layouts are great.

My only real problem with Gigantic is that – despite countless rounds of beta releases and user feedback – it’s a fairly limited game. Characters are diverse and the core gameplay is beyond solid, but once gamers have found an ideal balance for their five-person squads and have seen all of the fairly linear maps, there’s little to work toward beyond badges, medals, and achievements.

Another, more minor complaint is how this online-only game title struggles with lobbies. Matchmaking takes a fairly long time between rounds and requires each player to enter the game manually. If they don’t do so within a short window, the team enters battle shorthanded and at a complete disadvantage.

Finally, it would have been nice if Gigantic had a true single-player mode. At the same time, I doubt bots can replicate the level of onscreen strategy needed to properly deploy the different character classes. However, these are all minor complaints in an otherwise impressive, enjoyable multiplayer title. Like the cliché says, Gigantic is easy to learn, but near impossible to master, and does a good job of balancing free-to-play accessibility with progression and reward.

I may still not know how to describe Gigantic to newcomers, but I know it didn’t really matter when playing. Though my preferences had me questioning how much I’d enjoy playing a MOBA-styled title like this before I started, I’ve never been so happy to be wrong. Rating: 8 out of 10

Disclosures: This game was developed by Motiga and published by Perfect World Entertainment. It is currently available on Windows PC and Xbox One. A review copy of the title was obtained via publisher and reviewed on the Xbox One. Approximately 12 hours of play were devoted to the online multiplayer mode. There is no singleplayer mode.

Parents: The ESRB has rated this game T and it contains Violence and Blood. Though the game is largely centered on violent shooting and melee attack, it’s all done in an exaggerated, non-realistic manner. Nothing concerning here.

Deaf & Hard of Hearing: The game uses audio cues to reflect onscreen action, but these are not necessary to play and enjoy the game. There are no onscreen subtitles, but the view of the action shifts whenever a significant event occurs, such as a clash with a Guardian. Playing with the sound off did not limit my ability to play Gigantic.

Remappable Controls: The Xbox One version has no remappable controls.