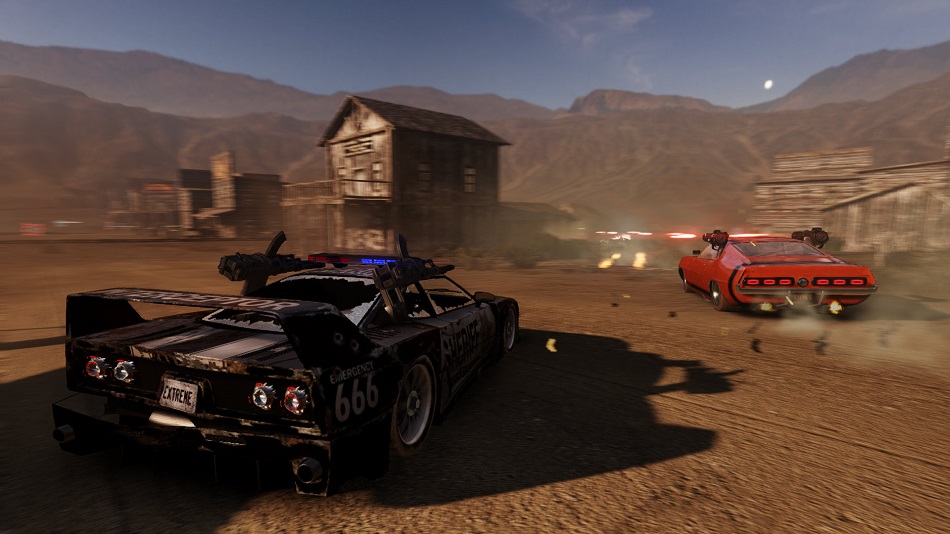 HIGH Drive cars and blow things up in digital wastelands. What’s not to love?

LOW For gamers who long to play deathmatch and capture the flag solo, their dream game has arrived.

WTF The only thing “extreme” about this title are the loadtimes.

I’d like to start this review with a request.

Developers, please stop using the word “extreme” in game titles, descriptions, or dialogue. I don’t care if the work features a character standing on a cliff on one toenail while gripping olive forks in every orifice — “extreme” no longer has any meaning.

This is especially true when the supposed extreme entertainment is a direct port of an average-looking PC title from 2013, with interminable (and inexplicable) loadtimes. I was starting to despise Gas Guzzlers after five minutes of waiting to advance past a static splash screen, and I hadn’t even revved an engine or fired a weapon. “Extreme” does not apply here.

The structure of the game is minimal — win races, rack up experience points, incinerate the competition with combat artillery. When players win enough, they advance to tournaments that feature three different race types – power (simple driving), battle  (these introduce weapons) and knockouts, which require players to destroy all comers. Each of the dozen or so courses are also chock full of power-ups, ammo and the like.

Once the racing finally begins, excitement doesn’t come along for the ride. The driving itself is fine. The gunplay is fine. The graphics are fine. The music? That will be forgotten milliseconds after the last stock guitar riff finishes dulling players’ eardrums, but even with a decent range of weapons and some interesting environments, this is a painfully generic title, even by low-budget standards. 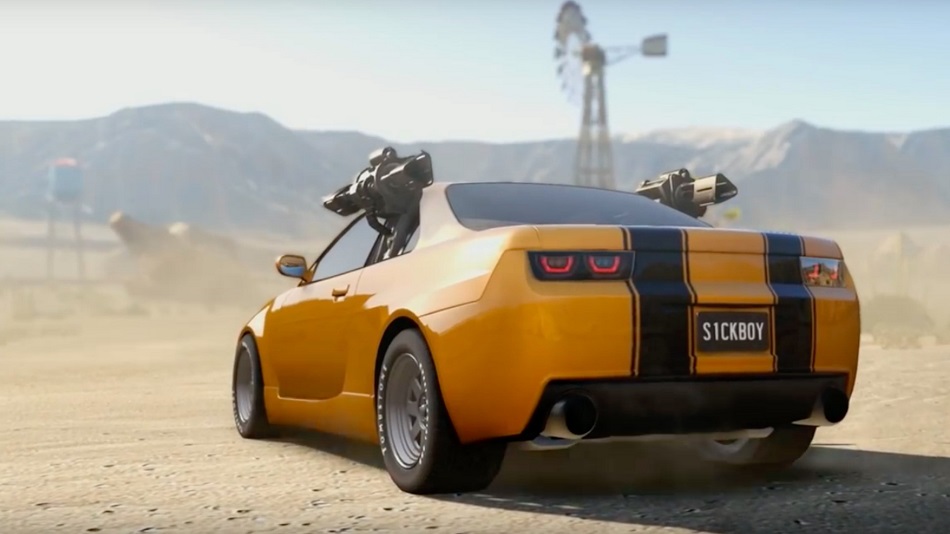 Controlling the vehicles is perfectly adequate. The included schemes are intuitive and respond well to user input. Likewise, the visuals and sense of speed are fine. With so much onscreen chaos, it’s unlikely that fans will spend much time harping on texture clipping, vehicle models or anything else — this is a bargain title that looks like a bargain title but doesn’t offend with its visuals.

With career progression, users will unlock new vehicles, weapons and performance upgrades. Of course, there are also special race events, sponsorships, in-game cash bonuses, and more. Some of these events consist of minigames like capture the flag, team deathmatch, and even a zombie/horde mode that makes even less sense than the rest. Unfortunately, these modes are only available during the single-player campaign because the console version features no online multiplayer.

I’ll say it again — Gas Guzzlers Extreme features capture the flag, deathmatch and zombie horde mode, but no competitive multiplayer. If readers need to scratch their heads harder, they’ll love hearing these modes did exist in the 2013 PC edition. I’m not one for overstatement, but omitting multiplayer in a game like this seems unthinkable, especially since it won’t be long before players see everything it has to offer.

Gas Guzzlers Extreme strikes me as a project that likely held much promise when it was conceptualized, but was probably hindered by a lack of resources. With a simple, accessible premise, uncomplicated control scheme, and action-oriented approach, the title could have served as a nice change-of-pace from hyper-technical racing sims and overdone street racers. I doubt I’m the only gamer who imagined it might be a modern-day Twisted Metal, but Gas Guzzlers never quite captures that spirit. Rating: 4 out of 10

Disclosures: This game is developed by Gamepires and published by Iceberg Interactive. It is currently available on PS4, Xbox One, Steam and Windows 10 PC. This copy of the game was obtained via publisher and reviewed on the Xbox One. Approximately 5 hours of play were devoted to the single-player mode, and the game was not completed. There are no multiplayer modes.

Parents: According to the ESRB, this game is rated T for Teen, though its content teeters toward a stronger rating. This is a combat racing game in which players drive vehicles through various tracks while using a variety of weapons, including shotguns, machine guns, land mines, and rocket launchers. The game includes brief references to sexuality (e.g.,“Jenny Talia,” “Izzy Cumming”). The text/dialogue include phrases such as “Mari Juana”; “I’ve got balls of steel;” “My balls, your face;” and “visits to the toilet and 1537.92 kg of poo were released into the world oceans.” Alcohol and tobacco references also appear in the game and profanity can be heard in radio chatter.

Deaf & Hard of Hearing Gamers: The game features on-screen text and tactile feedback, and does not require sound to enjoy.

Remappable Controls: The game features remappable controls on PC, but not on console versions.