The competition is heating up 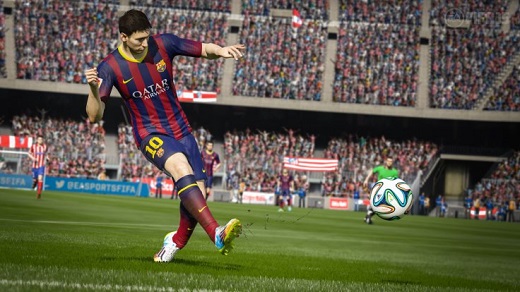 HIGH A solid card-based mode that doesn't feel out of place.

LOW EA may have gone to the rehash well one too many times.

For the first time in a very long while, digital soccer fans have some thinking to do.

Though Konami's Pro Evolution Soccer has been hanging around like a bad case of fleas, it's been a long time since it's been a true competitor. However, the kids at Konami finally figured out how to marry "pretty" with "playable" and now there's an honest-to-goodness battle for shelf space.

Perhaps that's good for gamers, but it also makes reviewers like me start looking at things more critically. For years, FIFA was the gold standard for soccer games, if not all sports games. It was beautiful, played well, and made just enough improvements each year to justify a new purchase. (Can't really say that about Madden.)

So, what did my more critical eyes notice about FIFA? Well, for one, our beloved golden standard may have gotten a little lazy from the lack of competition. In fact, a serious argument can be made that EA played it too safe this year.

While last year's FIFA revamped the shooting and pace played a vital role, this year's edition couldn't be further from that if it tried. Instead, FIFA 16 offers a slower, more methodical soccer game where outthinking opponents is the only true way to success. If gamers want to hit a team on the counter, it's now harder than ever.

However, the game is much more physical, with more struggles for the ball and less instant-success through fudging the tackle button. There's more header and cross-play. Yet, the referees are also much more sensitive to even the slightest bit of contact.

Thankfully, the defense and goaltending have returned to form. In fact, I much prefer the shooting and the goalkeeping in this year's FIFA to that in PES. It has better responsiveness, more realism, and is more satisfying when connecting. If gamers get beat, it's on them, period.

Where FIFA excels is with the sum of its parts: the modes, the options, the sheer amount of gameplay possibilities. There's a huge career mode, the usual online and offline options, and the licenses too, of course. In this regard, FIFA 16 still outstrips PES, but the real surprise is which FIFA mode stands above the rest: The annual stupid card game!

Now, I've been critical of EA and 2K for including the now-obligatory trading card games in their titles but this mode just fits better with FIFA. In fact, it's a major selling point with this year's edition by introducing FIFA Ultimate Team Drafts, which is, quite bluntly, damned phenomenal.

FIFA Ultimate Team Drafts is a fantasy soccer draft at the core of FIFA Ultimate Team, where gamers choose every member of a squad from randomly-selected players and then pits them against other like-minded soccer fans. Win games and earn Gold Packs for an Ultimate Team. Lose, and it's back to scavenging coins for another valuable Draft token. It's dumb and nonsensical, yet in this game, it's addictive beyond belief. Sure, users will only get the most out of FIFA Ultimate Team if they have a huge amount of time—or cash—but it's a strangely satisfying and compelling journey if users are willing to put the time in.

On top of that, EA Sports has included women's international teams in this year's FIFA. It's not just a case of re-skinning the men's players either, it's actually a concerted effort to encapsulate the essence of women's soccer. The gameplay seems more measured, slightly different, and quite enjoyable. Unfortunately, this mode is limited—there's not really much players can do with the women's teams aside from play a few exhibitions or vie for the Women's International Cup.

This mode is great, not to mention LONG overdue. But it also comes across as a complete PR stunt, designed to steal digital column inches from PES, rather than being a full-fledged part of the game. Women's soccer is a phenomenal, storied sport enjoyed the world around. Why such an inclusion is considered a "special mode" in 2015 is beyond me, but at least EA is trying. Next year, there are no excuses. Soccer players don't all have Y chromosomes, folks.

Overall, the core of a highly successful soccer game is in FIFA 16 but there's a niggling sense of "been there, done that," alongside a healthy dollop of "coulda shoulda woulda" that gets in the way. It's just a bit too safe and predictable. FIFA is still the Cup winner, but PES 2016 has made this annual Friendly a more heated affair. It's a safe bet both Konami and EA are doing a LOT of homework for their respective follow-ups. Rating: 7.0 out of 10

Parents: According to the ESRB, this game is rated E, and does not contain anything questionable for gamers under the age of 18. Unless gamers are offended by professional athletes wearing sponsor logos all over their uniforms, there is nothing to worry about here.

Deaf & Hard of Hearing: Though the stadium chants and deep commentary are killer, there is nothing that would prevent enjoyment by gamers who are deaf or hard of hearing.