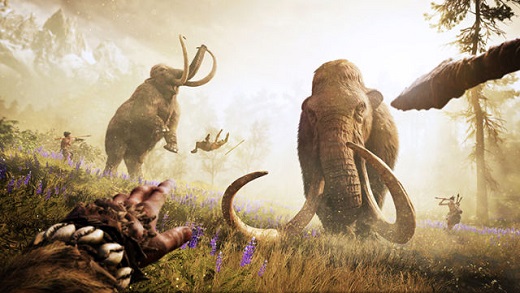 Ubisoft nearly fooled me. For the first few hours of Far Cry Primal, I firmly believed this was an all-new experience. The prehistoric setting was something I hadn't seen before (no, Turok fans, those games don't count). The realistic crafting seemed to challenge me to be more creative. Tribal interactions were a refreshing change from the usual modern-day drug lords and ne'er-do-wells.

But then there's a moment where it all becomes clear—Far Cry Primal is effectively the same Far Cry we've played for the last few years. Yeah, the weapons are different, but it's really just replacing guns with spears, clubs and bows. I don't regret the time spent, but it's not as unique as the window dressing would have us believe.

As the adventure begins, we're introduced to the main character through a training level teaching combat basics during a mammoth hunt.  Players are placed into the deer hide shoes of Takkar, the lone survivor of the fictional Wenja tribe who were scattered by a rival group of cannibals. Rather than sit idly by and wait for the wheel to be invented, Takkar takes it upon himself to reunite and expand the tribe by rescuing and recruiting individuals with vital skills.

It needs to be said that the game assumes a lot of system knowledge on the part of the user. The training segments are short, and little narrative or explanation is provided about camps, recruitment, crafting weaponry, and so on. When coupled with the game's homemade cave language (prepare to read subtitles during cut-scenes) newcomers are faced with a steep learning curve.

Once a groove is found and quests start being completed, the recruits become part of a community where users see their village grow while also earning Takkar access to upgrades and resources. His crude pointed sticks soon become handmade arrows, which are as lethal as a .38—and boy, do they come in handy. Whether fighting man or beast, there are plenty of intense combat sequences to be had in the tremendous open world.

However, that's where the obvious connections to traditional Far Cry end. The series is known for frenetic gunplay, diverse vehicle combat and over-the-top technology, but obviously these elements can't happen in 10,000 BC. So, Ubisoft took an interesting new direction with the protagonist by making Takkar a wildlife whisperer.

Once the shaman joins the tribe, Takkar assumes the role of "apex predator" by gaining the ability to tame, control and ride the local wildlife. Trust me, once I went for a ride on a mammoth, I forgot all about fluttery helicopters and beaten-up Jeeps …at least for a little while.

The most advantageous animal perk is the first one Takkar receives—the companion owl. This massive bird becomes the gamer's eye in the sky, allowing them to plan attacks strategically, and turns Primal into as much of a stealth game as it is an FPS.

For a shooter purist like myself, I found that the beast master abilities were more enjoyable when using the land-based animals for distraction, rather than for slaughter. Releasing a bear to do some murderous dirty work gives a visceral jolt the first few times, but I preferred sending in a wolf to catch enemies off-guard before stealthily sniping them with a precision arrow.

The choice to use the animals is entirely up to the user, and is rarely a requirement to move forward. Seeing a cave lion go HAM might become a little repetitive after it's been summoned several times, but an animal assist is always there when needed.

Putting the furry mechanics aside, the lack of a heavy-hitting plot might hurt Primal's long-term viability. It's adequate and has some high points, but players will probably have trouble connecting to Takkar and his compadres due to the obvious language barrier.

Though we read the impassioned text, and saw how NPCs react to story developments, this is a prehistoric culture, with less relatable people and problems. All the jumping, grunting and subtitled exclamation points can't make up for a well-written speech, delivered in a language the audience will understand. I knew I needed to conquer Oros, but by the 10-hour mark I didn't care as much for the fate of the Wenja as I did about getting Takkar to the finish line.
Perhaps if the NPC characters were more emotive during the subtitled scenes, or if the storyline filled the communication gaps, we would relate more closely to the characters at hand. But by the middle of the campaign, I couldn't make a solid connection between myself and Takkar, much less his side-quests.

Longtime Far Cry fans might feel that the prehistoric setting is a re-skinning of the previous titles, but despite any déjà vu, Far Cry Primal remains an enjoyable, highly playable title. It may not be perfect, but it's a triple-A title that tries to shake up its own formula, and efforts like it are sorely needed. On the other hand, it's not too removed from previous Far Cry titles, and certainly not different enough to warrant a second visit to 10,000 BC. Let's hope this is an interesting one-off, and not the next subject of repeated iteration. Rating: 7 out of 10

Disclosures: This game was obtained via publisher  and reviewed on the Xbox One. Approximately 20 hours of play were devoted to the single-player mode, and the main plotline was completed. There are no multiplayer modes.

Parents: According to the ESRB, this game contains: blood and gore, intense violence, nudity, sexual content, manual labor and excessive body hair. It's a caveman simulator, folks. There will be death. There will be hunting. And don't play with anyone from PETA.

Deaf & Hard of Hearing: The game's speech is presented with subtitles, so gamers who are deaf or hard of hearing can easily follow the storyline and on-screen instructions. However, this environment is rich with environmental and gameplay sounds which enhance the experience. Players unable to hear these cues may find themselves occasionally surprised, although enemies are usually represented on the mini-map.

Remappable Controls:  The game offers several control schemes, but does not allow for fully customized, remapped controls. Xbox Elite Controller users, however, should be able to customize the game to their liking.

Colorblind Modes: Primal does not offer a colorblind setting, which becomes a considerable problem during "hunter vision" mode.

I agree with the disconnect due to the language. It’s not the same as translated subtitles for an existing foreign language, because the language used in this game isn’t provided for any type of existing listener. It’s just an impediment between us and the characters. It’s even more of a disappointment given the nuanced performances of the villains in the previous two games.

Just have them speak intelligible English. We’ll just assume it was a stylistic choice made on our behalf. It can’t be any more awkward than the choice to give everyone in AC Unity British accents.

Has the reviewer never watched a film in another language, with subtitles? You are clearly missing out on some rich cultural experiences. Subtitles are no impediment to connecting with characters (but lack of good writing can be).

Further, the ‘wtf’ section is pretty sexist and gender-normative. The ESRB rating for the game states nothing about manual labor or ‘excessive body hair,’ so for some reason that is just flat out false.

Thanks for writing. Though I still believe the made-up language detracts from the player’s connection with the protagonist — especially one that we’re expected to spend considerable time with — I acknowledge that this is an subjective viewpoint. Still, I feel Ubisoft could have found a way to make this prehistoric communication more accessible to the player, to bridge the gap in storytelling. Regarding your thoughts on the “armpit hair” comments, we have since retracted and revised the text to eliminate those references. Though our goal was to get a laugh at the expense of fictional, prehistoric game characters, your… Read more »