EA's reboot lacks the eye of the … well, you know. 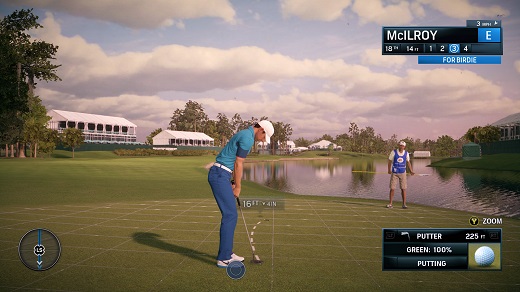 HIGH: Not having ample time to bake scones between holes.

WTF: Did I just use a 4-iron near a grazing elk?

Tiger Woods may have just had the worst year of his life. For all the gossip about the embattled champ's romantic dalliances, lost sponsorships and tarnished reputation, 2014 was the year he lost something far more important—his professional credibility.

You see, even when a few (dozen) bad choices cost Tiger countless millions in product endorsements, EA Sports stood firmly behind him and kept his name front and center on their flagship golf franchise.

Then he started playing badly. Then he played worse. Then it was newsworthy if he made a cut at all. Before long, people began referring to Tiger's greatness in the past tense, and EA was forced to cut ties with its fallen poster boy, in hopes of reclaiming its own declining credibility on the virtual links.

After a few years putting around without a spokesman (or a decent golf sim) EA wrenched the torch from Tiger's hands, and now leans on 26-year old PGA phenom Rory McIlroy to lead this franchise into a new generation. Though Rory is hardly the household name Tiger was, his pedigree and limitless potential makes him a natural successor to the throne, right?

Well, Rory may be the right cover boy and this may be the best PGA game since Tiger adorned the jewel case, but I'd bet my massive GameCritics salary that in a few years' time, this title will be viewed as nothing more than a stopgap, rather than the true reboot fans have been awaiting since 2013.

First impressions of Rory McIlroy PGA Tour are good ones. After a fairly lengthy tutorial interspersed with talking head videos of Rory describing his PGA memories, players are given a wealth of options right from the outset. Gone are the mind-numbing skill grids, RPG-lite grinds, and excessive amounts of locked content.

Instead, players start accruing skill points for just about every action in the game, and before long, attributes and equipment choices allow users to play meaningful golf, regardless of which difficulty setting is chosen.

In fact, other than the fairly forgiving swing mechanism in the game's Arcade Mode, all control schemes can comfortably be labeled "sim" without upsetting too many purists. Even the classic (but dated) three-click method seems precise, both in operation and resulting shots. If all else fails, users have the option to customize a control scheme to their liking. If users have played a golf sim in the last decade, they will find a comfort zone here.

The modes all perform as expected, including the Night Club, which is a fun distraction, but hardly a reason to buy the title. Still, given the game's overall vanilla look and feel, the over-the-top mode is a welcome breath of personality from a sport not known for having much of it.

Career mode is the most engaging part of the game, as the daunting, insurmountable attribute grind of previous PGA titles has been streamlined, allowing users to build tangible skills quickly, resulting in marked improvements each time they play.

There are two major letdowns in this mode. First is the weak and limited player creation tool, which restricts players to a handful of stock models and a ridiculously small selection of customization options. Want facial hair? Then you have to sport a deep tan. Have thin eyebrows? Congratulations, you're relegated to choosing EA's version of Young Asian Man. Despite my best efforts, every character I created looked like a shady club owner ripped from the Law & Order headlines. Keep expectations low for this portion of the game, friends.

The other letdown comes from the severely limited course selection, with just eight authentic courses and four fictional clones available at launch. Coupled with the loss of the Augusta National/Masters licensing, Rory McIlroy seems to offer considerably less variety than even the half-hearted PGA titles of 2013-14.

Because of this, the fourth career tournament will likely be played on the same course as your first, and expect to see it again on the ninth. Call me a cynic, but smart money says there are other courses buried in the game code. Before long, a slew of pricey "downloadable" content releases will make them available on a disc you've already purchased.

On a positive note, the best impression I took away from Rory McIlroy was speed. Instead of the old Ignite code which powered previous PGA titles, Rory runs on EA's vaunted Frostbite Engine, allowing for seamless transitions between shots, and virtually no loading between holes.

[ED. NOTE: This is a family publication. Please read that last sentence as innocently as possible.]

Visually speaking, let's compare the game to the man himself. Rory McIlroy is a good golfer, but it's doubtful he'll ever be seen shirtless on the cover of Men's Health. In turn, Rory McIlroy is a good golf game, but it's hardly a showpiece for current-gen consoles. Which is a shame, really, considering the amount of time EA had to polish this title for new systems, not to mention the fact that this is running on Frostbite. Yeah, Battlefield 4, this ain't.

Don't get me wrong—this is a perfectly fine looking game. But it's "fine" in the same way someone's girlfriend or boyfriend is "fine" when they don't receive an anniversary card. Course flyovers give a good sense of scope and grandeur. Player models are accurate, height/weight proportional, and animate well enough. Subtle nuances like animated wildlife, spectators and blurred insects on the camera lens are all done to good effect, but nothing about this game's visuals will "wow" gaming enthusiasts.

On both the Xbox One and PS4 versions, even when playing offline, there is noticeable texture blurring, random environmental clipping, and a somewhat janky hitch in the players' backswings. Even the NBC Sports branding and visual elements seemed "off," despite EA having nailed the presentation in NHL 15.

Also, the odd, anti-aliased shimmer effect, so prevalent in 360 and PS3 titles, is back in full force here. Every course, regardless of geography or weather, appears to be saturated in radiating humidity. This might explain the digital mosquitoes, but it's an annoyance for digital enthusiasts.

At no point during my extended play time did I ever once confuse Rory McIlroy PGA Tour with an actual television broadcast. This is disappointing, considering how EA's FIFA, Madden and NHL titles, not to mention 2K's pristine NBA series, all do this exceedingly well. Given the power of these consoles, and the pedigree of the development team, Rory McIlroy should have been a stunner.

Audio-wise, the golf sounds like golf. Drivers go "ping," irons go "thwack," and crowds offer condescending "ooohs" whenever a putt comes up shy of the target. However, much like the visual presentation, the all-new NBC Sports/Golf Channel announcers are just as repetitive and off-kilter as their digital predecessors. Through just a few hours of stroke play, they repeatedly mumbled the same phrases whenever I played certain holes, and rarely offered any specific information about my play beyond a previous day's result.

Just for a laugh, I loaded up a 3-wood while my ball was just inches from the hole, and proceeded to launch a moonshot into a pond 280 yards in the opposite direction. The commentators simply responded with a polite discussion of club selection and poor reading of the green. Maybe humor isn't golf's strong point, but from a company that once programmed Triple Play ‘97's announcers to comically describe "swirling winds," a little levity and personality would have been appreciated at that moment.

Online play is another letdown. While online golf was never the bread-and-butter of this series, one would expect a reboot to try some new ideas. However, one would be wrong.

The core head-to-head and tournament modes work as expected, and rounds can be completed quickly without waiting for others to take their turns. But, it's all done in a static, lifeless environment, with randomly disappearing/reappearing competitors, and devoid of any meaningful commentary. Before long, I realized online play offered little above the core game, and returned to my shady club owner's career progression.

Despite the criticisms, I'm giving Rory McIlroy PGA Tour a healthy recommendation. Yes, the game looks like a PS3.5 title. Yes, the presentation and sounds are lackluster. And yeah, Rory McIlroy is hardly the transcendent rock star Tiger was just a few years ago, but the game is enjoyable and it's certainly more engaging than The Golf Club, even if it's not always a technically superior game. Through all the bugs and niggling annoyances in Rory McIlroy, I found myself saying, "Okay, just one more round" well into the wee hours.

I'm sure once EA gets a better grip on this engine and produces stellar next-gen golf, we'll look back at Rory McIlroy PGA Tour with a furrowed brow. Until then, it's the best golf sim for current-gen consoles, and it offers fans and newcomers alike a heck of a good time, warts and all. Rating: 7 out of 10.


Disclosures: This game was obtained via publisher, and reviewed on the Xbox One and PlayStation 4. Approximately 15 hours of play were devoted to the single-player mode, and the game was not completed. 5 hours were spent testing all available multiplayer modes.

Parents: According to the ESRB, this game contains includes online features that may expose players to unrated user-generated content (PlayStation 4, Xbox One). While we expect golf fans to be a civilized bunch, if you play golf as badly as the GameCritics staff, don't be surprised if some salty language sneaks through these modes on occasion.

Deaf & Hard of Hearing: Other than the audible elements that provide a sense of immersion and realism, there's nothing that would prevent enjoyment for gamers who are deaf or hard of hearing.