A Throwback To A Not-So-Simple Time 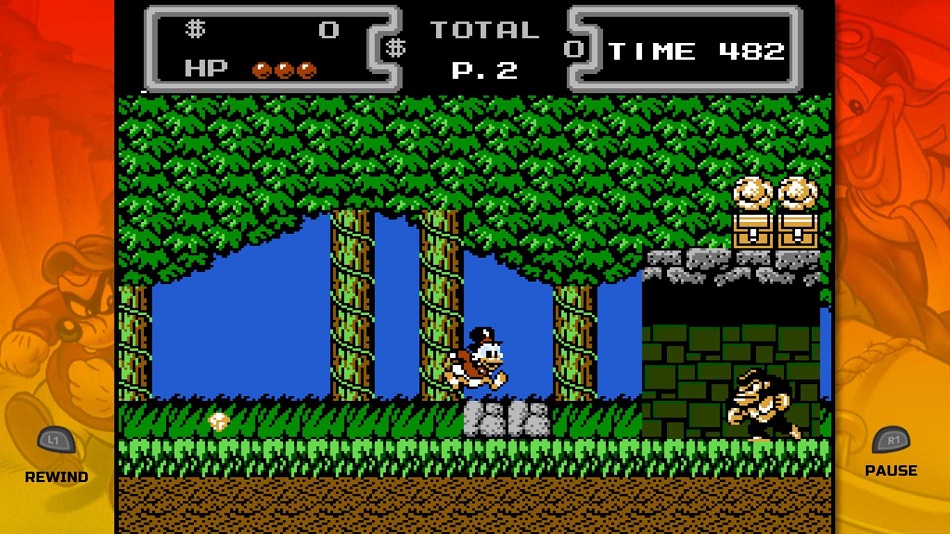 HIGH The rewind functionality spared more than one controller.

LOW Realizing how worthless and weak I am without tutorial levels.

WTF Remapping the buttons frustrated me more than the games did.

Nostalgia is a funny thing. It tends to paint a nice, rose-colored sheen onto our memories, erasing all but the happiest details from our subconscious.

Back in the late ‘80s and early ‘90s, Disney’s afternoon block of cartoons was considered must-watch TV for kids across the land, and side-scrolling platformers with nary a thread of connection to the source material (other than some theming) were considered worthy videogames. It might be time to power-wash the rosy film off those memories.

The Disney Afternoon Collection is the latest throwback collection from Capcom, a company that isn’t shy about repurposing vintage chestnuts for modern systems. Complete with five side-scrolling platformers (DuckTales, DuckTales 2, Chip ‘n’ Dale Rescue Rangers, Rescue Rangers 2, and Darkwing Duck) and one side-scrolling shooter (TaleSpin), this retrospective not only reflects a simpler time in gaming, but also a simpler grasp of what TV/movie tie-ins should be.

If only the games themselves were simpler, too.

When first booting the title, I have to admit that developer Digital Eclipse perfectly captured the essence of 8-bit gaming, complete with the same sort of quick screen flash that occurred when powering up the venerable ol’ NES.

Keeping with that theme, the game also offers a visual mode that adds artificial “scan lines” similar to those from a tube television and antiquated video cables. It’s not worth playing this way from start to finish, but the 4:3 layout and simulated coaxial cable hiccups evoked more than one round of reminiscing. That said, Digital Eclipse did make this a true upgrade, and the games are all playable on widescreen displays with full screen, smoothed-over graphics. Nostalgia be damned, this is the way to play.

From there, the main menu is easy to navigate, and shows not only the classic games available to play, but also a variety of visual and audio options, some historic touches like ads and artwork, and some new gameplay modes like Time Attack and Boss Rush.

Upon launching each game, the controls are briefly explained, alongside the option to customize them to player preference. It’s a very impressive, easily navigated front end, which – unfortunately – belies the frustration of the games within. Despite some minor improvements, this is still very much a NES experience with each of the side-scrolling platformers requiring pinpoint timing, pixel-perfect jumping, and the ability to react on the fly, with none of the forgiveness of today’s titles. Some mechanics are simply not explained, and without an FAQ, a good amount of trial and error will be required to figure out how to proceed. 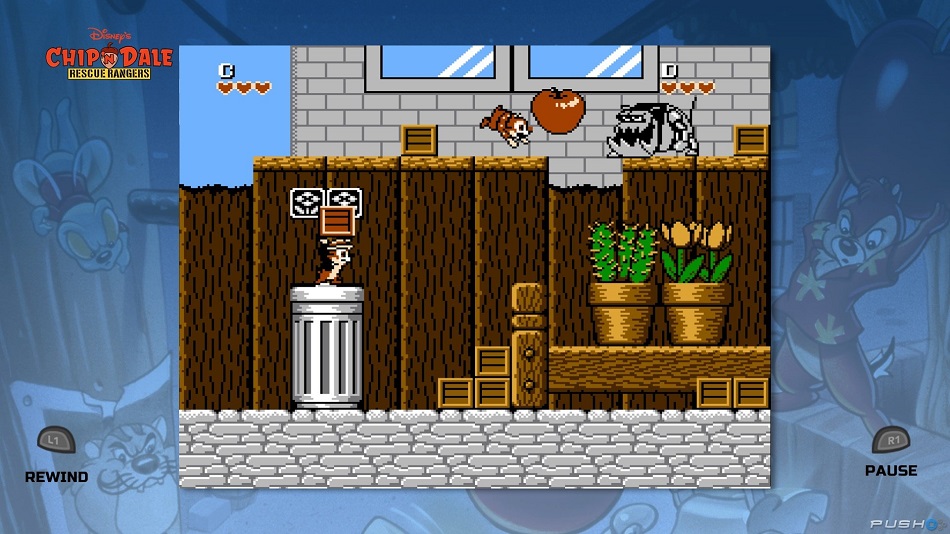 For example, I’m an experienced gamer who never played these titles 30 years ago, so when I finally realized Scrooge McDuck needed to lean into an item to use it, or that Chip and Dale needed to activate switches by using blocks and projectiles, I had mixed feelings. Of course, the sense of accomplishment when overcoming a challenge is rewarding, but I’m a middle-aged man who’s employed, has limited gaming time, and is very conscious of wasted effort. With each conquered level, I felt less accomplished and more hopeful that the games would deliver some awesome moments, but they never really did.

(…And before I hear complaints that middle-aged men aren’t the target audience, my 3-year-old son and 8-year-old daughter were equally nonplussed by the experience.)

Of the six titles in the collection, the DuckTales games have aged most gracefully. That’s not to say they’re without flaws – gaming has evolved quite a bit in three decades. Rather, they are the ones that most of today’s gamers will be able to pick up and enjoy without much frustration or contextual knowledge of the franchise. In these two titles, the mechanics are still difficult to grasp at first, but once mastered, they become second nature. The AI difficulty ramps up at a moderate pace, with levels presenting fair but adequate challenge.

In the other titles, things haven’t held up quite as well. While the introductory story frameworks lay a simple enough foundation, it is difficult for non-fans to understand why they should care about Baloo or Chip. With no engaging narrative threads to bring in newcomers, and difficult, often unresponsive controls, I foresee many gamers playing only a level or two before abandoning the collection in favor of something more accommodating.

Perhaps the biggest letdown of the bunch is Darkwing Duck, a title that likely started with lofty ambitions, only to have them neutered for the NES. The abilities and mechanics of the title character far surpass those from other Disney Afternoon Collection titles, and show impressive use of the limited two-button control scheme. The problem lies in how difficult it is to get these mechanics to work correctly each time. With just a few seconds to prepare, attack and repeat, Darkwing Duck’s gameplay quickly devolves into a button-mashing mess during intense moments. It’s a shame, because this had the potential to be a standout, even in a retro collection.

Mercifully, checkpoints are used liberally in all the titles here so most skilled gamers shouldn’t face too much challenge, but the inclusion of a “rewind” mode helps coddled gamers (like me) see the stories to the end by allowing them to call a digital mulligan when making a bad decision. It will get used, even if proud gamers won’t admit it.

While there’s something to be said for the charm and challenge of 8-bit gaming, and how it allegedly requires more skill from players, it should also be noted that Super Mario Bros was released nearly four years prior to any of these titles, and is still referenced for its precise, easy to use controls. I don’t think anyone has ever name-dropped TaleSpin or Rescue Rangers for innovation and playability.

In the end, I somewhat enjoyed Disney Afternoon Collection in spite of its shortcomings. Retro gaming isn’t just a fad, but rather a growing movement for gamers who miss the simple challenge of using just a pair of thumbs. For that population – and fans of the equally nostalgic cartoon series – this collection is a bargain. But, for a true throwback thrill, there are plenty of ways to get it without resorting to unresponsive controls and questionable game design. Like most collections, this is a well-intentioned labor of love for fans of the IPs and 8-bit completists, yet I’m guessing most newcomers won’t see much value in this journey down memory lane.  Rating: 5 out of 10

Disclosures: This game was developed by Digital Eclipse and published by Capcom. It is currently available on Windows PC, Xbox One and Playstation 4. A review copy of the title was obtained via publisher and reviewed on the Xbox One. Approximately 7 hours of play were devoted (in total) to the single-player modes of each title in the collection, and they were not completed. There is local multiplayer, but it was not tested for this review.

Parents: According to the ESRB this game is rated E10+ and contains Mild Fantasy Violence and Use of Alcohol and Tobacco. This title a collection of Disney cartoon-themed games. There are mild references to alcohol and tobacco use, but most are so innocuous, it would be difficult to even spot them. Parents and guardians can purchase with confidence.

Deaf & Hard of Hearing: The games’ storylines are all displayed via text, and on-screen cues indicate how to progress. The game’s music remains largely the same throughout, and is not necessary to provide audio cues to the player. There is nothing that would prevent users who are deaf or hard of hearing from enjoying of the game.

Remappable Controls: The game offers remappable controls, allowing most shoulder and face buttons to be reassigned as desired.