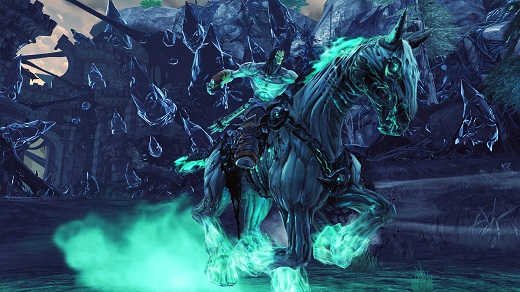 HIGH If you've ever said "I wish Lara and Link would fight like Kratos and collect a lot of crap," your ship has come in.

LOW Death, as it turns out, is kind of a boring dude.

WTF Even in the Apocalypse, is falling through glitch-filled scenery acceptable?

For those who aren't familiar with it, the Darksiders franchise is built on a solid, if not revolutionary, premise: Take control of the Four Horsemen of the Apocalypse, hack a lot, slash some more, and solve a few environmental puzzles along the way. It's a basic style of gameplay, but then again, so is God of War—a series this game "lovingly" borrows from more than once.

In the original Darksiders, players took control of War, but Darksiders 2 is all about his cuddly bro, Death. In this sequel, the gamer is tasked with clearing War's name from some nasty allegations. But unlike War's journey, which was filled with interesting characters and gameplay variety, Death's travels aren't nearly as entertaining.

Sure, there's plenty of action, and our protagonist has the requisite amount of lifeless one-liners, but no one he meets is particularly engaging, and the main storyline doesn't do much to move things along. Kill this, collect that, lather, rinse, repeat. At no point does the gamer feel s/he is making progress toward a bigger goal, nor is it likely they'll care by the third level.

That's not to say the action is bad. Quite the contrary—the actual button-calisthenics and puzzle-solving is up there with the better half of the genre. Controls are responsive and intuitive, and new abilities keep things fresh, even if they do fall into the "Player needs X for this level, so conveniently, here's the Y ability" model.

In turn, the levels are varied and interesting, and the puzzles offer some serious challenge in a game that doesn't initially appear to have any. Plus, the loot system is a nice throw-in for RPG lovers, without being too demanding or grindy for those who can't stomach dice with more than six sides.

So far, I've basically recapped the highlights of a game that came out years ago on a lesser platform. What makes Darksiders 2: Deathinitive Edition worth buying in 2016? Well, unless you haven't played it before, not a hell of a lot.

First off, the "upgraded" graphics are disappointing. The visuals in the original Darksiders 2 were solid for the time; nothing spectacular, but no slouch either. On new hardware, the minimal upgrades in graphic fidelity are underwhelming, while the reappearance of some VERY familiar screen tearing and framerate drops are inexcusable—what's the point of an "ultimate" edition if the same hindrances keep rearing their glitchy heads?

Second, this is very nearly the exact same single-player excursion from last-gen consoles. There is no local or online co-op. There's no traditional multiplayer. There are no update-exclusive features. It's simply a mildly prettier, equally flawed action title with a few pieces of DLC adding more of the same to an already samey package.

It's a shame, really.  This remake could have introduced newcomers to the Darksiders universe, or made those on the fence reconsider their stance. Action gamers and RPG-lite enthusiasts who've never tried it before will likely find a lot to love, but a little more polish would have gone a long way toward bringing a fresh sheen to the developers' vision. And for players who've already crawled these dungeons and still own the original version? Don't bother with this re-release.  Rating: 5 out of 10


Disclosures: This game was obtained via publisher and reviewed on the PS4.  Approximately 20 hours of play were devoted to the single-player mode, and the game was completed. There are no multiplayer modes.

Parents: According to the ESRB, this game is rated M for Mature. You play as a guy named "Death," searching for your brother "War," alongside some other nasty people. It is violent, explicit and not for children. Parents, if you're paying attention, there are more suitable options in the genre.