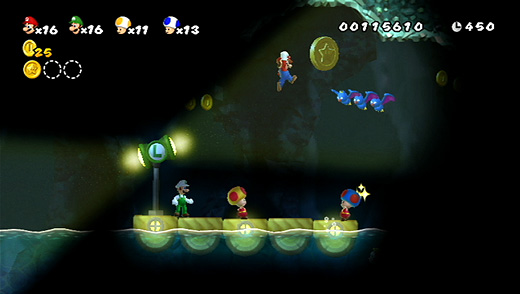 My wife and I went into Toys R' Us over the weekend to buy some presents for an adopt-a-family program, and of course, also walked out with a present for ourselves—a new Wii! We promptly returned home and spent the rest of the weekend playing it, basically stopping only to eat. We had a blast, and at least for the foreseeable future, I see us spending our nights together not watching Netflix, but playing the Wii.

Among the current crop of game consoles, the Wii stands alone. Its small and nondescript presence under our TV belies the amount of fun to be had upon turning it on. Not only are Wii Sports, Wii Play, Super Mario Galaxy and New Super Mario Bros. Wii totally unique and ridiculously fun games unavailable for any other system, but the Wii Virtual Console contains a stunning amount of old-school games from a variety of classic game consoles like the NES, Super NES, Turbo Grafx-16, Sega Genesis and Commodore 64. And that's not all. Nintendo somehow managed to squeeze four GameCube controller ports and two memory-card slots into the side of the Wii, so now I can play all the great GameCube titles I missed out on. Funny how Nintendo could do such a thing for the Wii, while I still can't play PlayStation and PlayStation2 games on my PlayStation3, which is about three-times the size of the Wii. Good job, Sony.

Granted, I wasn't impressed with the selection of Wii games currently on store shelves. Much of Wii's game library seems like kiddie stuff to me, and right now the only other game I really want to buy is The Legend of Zelda: Twilight Princess, which came out about three years ago (and I'll probably end up opting for the GameCube version if I can find it). So I guess I understand why hardcore gamers have been dismissive of the Wii, but I also understand why so many people have embraced it. As long as it's taken me to get on the Wii bandwagon, there's one thing I can't deny: Nintendo has made video games fun again.

I think Twilight Princess is still one of the best games for the Wii regardless of when it was released. I would definitely buy the Wii version because the controls were pretty cool with the remote though I imagine the gamecube version would still be decent. My wife and I tried playing New Super Mario Bros Wii together but she’s had a difficult time with so many things going on the screen at one time. It was a fun experience though. I find it easier to play that game alone because we accidentally kept killing each other. Regardless of whether… Read more »

Grats on your purchase. The virtual console is a pretty neat little feature. Don’t drink the Kool-Aid on “Twilight Princess”. I was sorely disappointed.

I hear that Dead Space Extraction is good, give that a try 🙂

I didn’t mean to imply that I was totally unfamiliar with the Wii prior to buying one. I had played the Wii here and there at various friends’ places and have played games like World of Goo and Twilight Princess quite a bit. It wasn’t until actually buying one that I discovered just how fun it is.

I picked up Twilight Princess just before Christmas by the way. I’ve only played the GameCube version, so I’m curious to see how the Wii version plays.

You and your wife should probably invest in Wii Sports Resort and another MotionPlus because that game is beyond fun and more than sits well with the other great games you mentioned. Maybe try World of Goo on WiiWare too as you can play together and its a great package for $15.

Congrats on the new purchase. Knew you’d love the Virtual Console. One of the best features of the Wii or any console released in recent history. Thing is I think you’ll blow through you list of must-have VC games in no time and find that the ones you really want will never be released on these shores no matter how hard to pray. In fact you’ll probably find that they were already released in Japan years ago. All of the games you posted are great, even Twilight Princess, and given how late you are to the party, the Wii might… Read more »