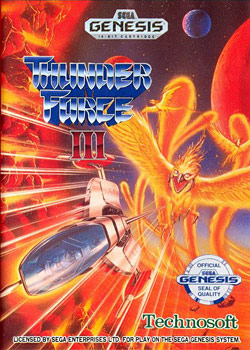 One of the frustrating things about video games for me is the utterly lame way we define certain genres within the industry. First-Person Shooter. Massively Multiplayer Online Role-Playing Game. Then there's my favorite genre: Unfortunately known as the horizontally or vertically scrolling shooter; the side-view or top-down shoot 'em up or more simply, the "schmup." That's right … schmup. You could mix and match any of those words, and it would still make sense to any gamer as to what you're talking about, but I prefer to put them all in the category of Action Game. It's less specific to be sure, but much easier on the tongue and far less nerdy.

In any case, the genre is almost as old as video games are. Famous examples include Williams Electronics' Defender, Namco's Xevious and Konami's Gradius. Later games such Irem's R-Type and Seibu Kaihatsu's Raiden II upped the ante in terms of firepower and graphics, but the basic formula was the same: Guide your little starfighter through a variety of space-themed levels, blasting the holy hell out of anything and everything in your path.

I could write a whole story on the genre—its evolution, the best games, the worst games—in fact, I think I'll do just that in the very near future. For now, I want to focus on one of my all-time favorites, Technosoft's Thunder Force III.

Hardcore Sega supporters will remember Thunder Force III as one of the seminal games for the Sega Genesis. I remember I was in junior high when a neighborhood friend raided his parents' Christmas-present stash weeks before Christmas, found the game, opened it and played it in secret for days. He called me and told me I had to come over and play this awesome new game. He was right. Thunder Force III was the game that made me want a Genesis. Don't ask me how he managed to return the game back to its pre-Christmas hidey hole—shrink-wrapped and all—without his parents finding out.

Thunder Force III is the perfectly balanced action game. Good graphics, well-weighted gameplay, an excellent soundtrack, and a high tempo throughout. It doesn't have the visual flash of some similar games released a couple years later, but those games were in turn not as fun as Thunder Force III.

The game's story is pretty standard stuff as action games go, and is hilariously narrated in the game's conclusion in the form of scrolling text with one of the more famous examples of Engrish usage in recent memory. Basically, an evil computer is trying to take over the galaxy, and you and your little spaceship are the only ones who can stop it.

Thunder Force III does a pretty cool thing right at the start by allowing you to choose which level—or in this case, planet—you'd like to attack first. You're treated to a map of the galaxy which displays a group of planets with names like Hydra, Ellis and Gorgon (I've gotta say, I love those names). Of course, in typical video game fashion, each planet is dominated by extreme elemental conditions—you've got the fire planet, the water planet, the ice planet and so on.

While practically every action title of the era had similarly themed stages, Thunder Force III makes inventive use of these scenarios in its level design—they're not just backdrops for the action; they're part of the action. For instance, in Haides—a rocky, cave-like environment—frequent earthquakes shape and shift the surrounding rock formations as you progress through, and if you're not paying attention, you'll fly right into a cavern wall or rock. In Seiren, the water level, rising currents can push your ship into an enemy or other obstacle, while in Ellis, the ice planet, you have to constantly be aware of falling ice shards.

The weapons system in Thunder Force III is perhaps its most notable achievement. The way in which you acquire weapons is certainly nothing new. Just as in countless other games of this ilk, you simply have to shoot a tiny, fast-moving red ship to release a weapon icon, and pick it up. However, unlike a lot of other old-school shooters, once you've collected a weapon, it stays in your arsenal so you can select it anytime you need it. Also, the weapons themselves are unique and spectacular in their design and execution. Each one not only has a specific use depending on the situation, but they also look great. The game's most fun weapon to use, the Hunter, sprays shots that track and destroy in a very satisfying way, but it's not the best weapon to use against a level boss, as it doesn't inflict a great deal of damage. There's also the Wave, which penetrates through otherwise impenetrable environment objects; the Sabre, an extremely powerful weapon that cuts a clean path of destruction ahead of you; Fire, which is useful in tight spaces as it hits enemies above and below; and the Lancer, a deadly weapon which covers your rear. There's also the CLAW, a pair of small satellites that orbit your ship and essentially double your firepower, as well as absorb enemy fire; and the Shield, a force field which can take three hits before disappearing. I like how a voice, presumably the co-pilot's, announces each weapon when you acquire it.

Another gameplay feature that separates Thunder Force III from its counterparts is the ability to adjust the speed of your ship on the fly. Games in the Gradius and R-Type series forced you look for powerups to increase your ship's speed, while never allowing you to decrease it. Thunder Force III takes a more sensible approach in allowing you to adjust your speed from very slow to very fast (and two points in-between) as the situation demands.

When I play Thunder Force III, however, I don't think much about its technical and design achievements. In fact, one aspect of the game that's disappointing is the lack of spectacular, or even decent, explosions—usually a basic requirement of action games. The meager explosive effects in Thunder Force III were probably a necessity to keep the game moving along without the slowdown that plagued most console action games of the late 80s and early 90s, but even so, they leave something to be desired.

Also, the game isn't that difficult, even in "Mania" mode. I don't think that hurts it at all, however. Whenever I play it, it's always set to "Mania," and it's always about finishing the game by losing the fewest amount of lives and gaining as many extra lives as possible, because your points total at the end is determined by such achievements. I like games that encourage high scores, and in this case, more tension and excitement is created in pursuit of the ultimate high score.

With Thunder Force III, it's all about the genuine feeling of excitement you get while playing through the game—a sustained adrenaline rush few games achieve. This is helped greatly by, dare I say, one of the best soundtracks in any action game, period. A good musical score can go a long way in helping an action game achieve critical mass, and the music accompanying the mayhem in Thunder Force III is just about perfect—especially through the game's first five stages. In fact, I would so far as to state no other game depends on its soundtrack more to carry it through some of its weaker moments.

All of these other episodes in the series only highlight why the third installment is so great. The sequel, Lightening Force, went all out in the visual department and ratcheted up the difficultly to insane levels, but in the process lost the balance that made Thunder Force III so playable and fun. Rare is the game that sacrifices excellence in one area of its production for the sake of maintaining an overall excellence.Thunder Force III finds a perfect blend of good ideas, good visuals, good gameplay and good sound, and the result is a Great Game.