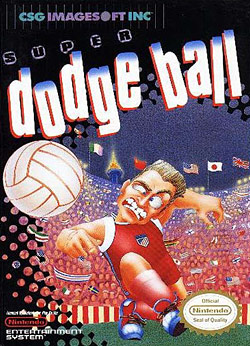 I grew up in Buffalo, NY and attended a small, Catholic elementary school in the working-class neighborhood of South Buffalo, just a couple of blocks from our house. Apart from the crazy nuns who ruled with iron fists and the epic snowball fights that would erupt as we walked home after school, my most memorable times at the school were playing dodge ball during gym class and at Boy's Club on Friday nights.

The funny thing about dodge ball at the time was how many variations the game had—rarely being the free-for-all scenario you commonly see nowadays. When I played in school, it was always two teams separated by a line that neither could cross. Hit an opposing player, and they're out. The team with the last man standing wins.

Sometimes the rules allowed players to be brought back into the match when their team caught an opponent's throw. Sometimes we played "Army Dodge" in which getting hit on a limb could force you to play hopping on one leg or playing with both arms behind your back. In another variation, "Doctor Dodge," a "doctor" would stand in a safe zone behind each team. When his or her teammates were hit, they were forced to lay down on the spot and wait for their doctor to run out and drag them back into the safe zone, after which they would be revived and could run back out into the match. Hit the other team's doctor while he's performing this emergency service, and you win the game (this version of dodge ball was my favorite).

Dodge ball has since been mostly banned in schools because, I guess, of the "violent" act of throwing a ball at another human being, but the game has also enjoyed a renaissance of sorts as grown-ups and hipsters now play dodge ball in organized, adult leagues.

While I do still sometimes get a kick out of throwing things at people, I have no desire to play in one of these leagues. Besides, I've long had a game in my possession that not only captures what made dodge ball so much fun as a kid, but also might be one of the most original and fun two-player games of the past 20 years.

Super Dodge Ball first hit North American shores in the arcades, but the version released on the Nintendo Entertainment System back in 1988 is the one that everyone remembers. I've met a couple of snobby gamers who dismiss this game as silly and point out all the slowdown and visual flicker that occurs when too many character sprites are on-screen at once, but make no mistake, Super Dodge Ball is a Great Game.

Super Dodge Ball presents dodge ball not as the school-yard game we're all used to, but as a hardcore international sport on par with soccer. Although the every-man-for-himself Bean Ball mode does in fact pay tribute to dodge ball's roots by taking place in a school yard, the main one and two-player modes feature nine international teams competing in a World Cup-style format. The one-player story mode puts you in control of Team USA as they fly across the globe and play teams from nations such England, Iceland, India, Kenya, China and Japan, starting with a match in front of the Statue of Liberty against their American rivals, the Team All-Stars.

The various locales in Team USA's travels are great in capturing the flavor of each country. In England, you play on a cobblestone street in front of London's iconic skyline. Iceland's court, of course, is a sheet of ice which has players hilariously sliding all over the place, while in Kenya, the muddy ground makes running around difficult.

The final match is against the USSR (it was the 80s after all), and in the fine Technos tradition of Double Dragon and River City Ransom eventually gives way to a battle against Team USA's dark, evil twins.

The two-player versus mode is more straight forward. The setting is more like that of an international friendly in soccer, in a neutral stadium, and even allows for each player to play as the same team, which is sometimes the best option for a totally fair match between experienced players. The great thing about Super Dodge Ball is that each team has various strengths and weaknesses, and every character in the game is rated among seven statistical categories, such as "Throwing Power" and "Damage Capacity." For instance, Team USA is a very well-rounded team, whose mercurial captain Sam possesses punishing power throws. India's players, on the other hand, all have very low numbers in the "Energy" category, but all can withstand a tremendous amount of damage before losing a health point—especially the character Swami, who is almost always the last man standing and is damn-near impossible to kill.

The version of dodge ball played in Super Dodge Ball is a six-against-six affair in which the two opposing teams play on a court divided by a center line. Each team consists of three players on each side, along with three additional players who occupy the out-of-bounds space surrounding the opposing team's side. This is an important detail, as this setup allows for some really fun gameplay dynamics. Not only can you fake out your opponent by passing to these guys and attacking from behind, but you can also senselessly nail the ones surrounding your team from point-black range as they stand there defenseless.

Of course, there are other differences between this game and its real-life counterpart—the most obvious being that every character in Super Dodge Ball possesses two signature power throws—one while running on the ground and one while in midair. These throws are imbued with snazzy special effects and inflict heavy damage on the other team, but can also be caught and nullified like any other throw. Another obvious departure from the dodge ball of your childhood: These characters actually die when their energy is depleted—becoming little angels that float up to, well, Heaven I suppose. 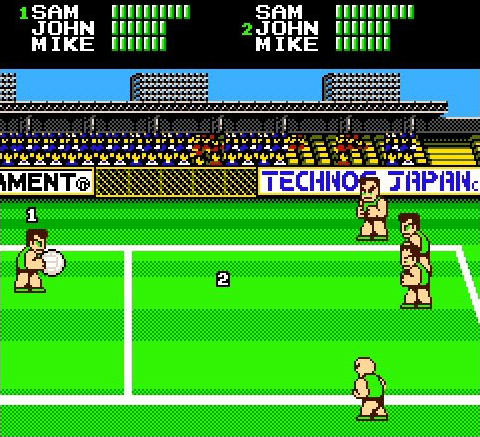 There are other fun gameplay touches, like when a character with low energy will stop for a few seconds to catch his breath after taking a hit or running around too much, which leaves him mouth-wateringly wide open to an attack. I also love how characters will sometimes sneakily step over a line to snatch the ball before an opposing player can pick it up, and how a computer-controlled teammate will also frantically ask for the ball if you look in his direction.

I also like the basic arsenal of moves the player is given. You can run, jump, dodge, catch, pass and throw—that's quite a bit for a controller with a d-pad and two buttons.

The game does have a few flaws, chief among them is the inability to play as any team in the one-player mode. Guiding Team USA to the world title is fun, but it wouldn't have been difficult for Technos to give the player the freedom to choose between all the teams. Also, the Japanese version of Super Dodge Ball supported the NES four-player adapter, called the Satellite in the US. Apparently the game was released in North America before the Satellite was, hence that support being removed for its release here. That's too bad, because while the Bean Ball mode is fun with two players, it would have been an absolute blast with four (though I do wonder if that would have worsened the already bad sprite flickering and slowdown that sometimes plagues this mode).

I also have to mention Super Dodge Ball's soundtrack—it's utterly brilliant. Whomever composed the music for Technos' games has to be considered a genius in how he or she got such memorable and imaginative tunes out of the NES hardware. Each stage in Super Dodge Ball has its own unique score, and while some people can't stand the MIDI format, somehow each track evokes the setting and action in a really fun and light-hearted way. You'll find the same kind of brilliance in all of Technos' other NES games, from Double Dragon II: The Revenge to the great River City Ransom.

While Super Dodge Ball was something of a cult hit in North America, in Japan it was merely one title in a popular series of related sports and action games by the developer Technos. Of the sports games, only the soccer game made to our shores—published by Nintendo as Nintendo World Cup. The classic Technos game, River City Ransom, featured the familiar school-yard setting, as well as Technos' signature character design, but was actually more of a parody of Technos' own arcade hit Double Dragon.

Even though smart gamers have been championing Super Dodge Ball as a classic since it was released, it has finally become recognized as such after languishing in obscurity for many years. While Japanese gamers have had more than their share of dodge ball-related videogames, it wasn't until recently that sequels began appearing in North America.

Super Dodge Ball Advance was an early title for the Game Boy Advance, and while it was developed by former members of the original team and had fantastic graphics, it was severely lacking the playability and fun of the original.

Another new portable game, Super Dodgeball Brawlers, was released last year for the Nintendo DS, but again, while the visuals were excellent, somehow it failed to capture what made Super Dodge Ball so fun.

Luckily, fans of the original can now find it on Nintendo's Wii Virtual Console.

You my friend are a genius. Your article makes me feel normal (as I try to explain to folks how awesome this game is and why it’s on my wii). The only games I remember from my childhood were genius and this is one of them. Thank you for your excellent review! Micah