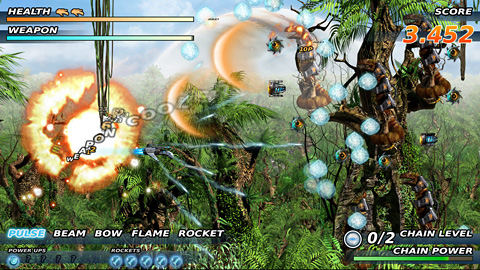 I've been meaning to get to this game for a while now. Not because it's been out for some time, but because I really loathe it. Side-scrolling action games for Xbox Live Arcade, Wii Virtual Console and PlayStation Network seem to be the chic thing nowadays, but it's amazing how painfully mediocre most of them are. It's obvious to me that with Söldner-X: Himmelsstürmer, the developers were out to make the ultimate side-scrolling shooter. The tried-and-true elements are all there. It's got the lush and crisp visuals. It's got the techno soundtrack. However, the weapons system is beyond lame. The gameplay is weak and a sad attempt at ripping off the chain system in the influential Treasure classics Radiant Silvergun and Ikaruga, and the game as a whole is just kind of boring.

And it must be stated: The title is ridiculous. I could deal with Einhänder (by which this game was obviously inspired), but Söldner-X: Himmelsstürmer? I looked up the translation on Wikipedia, and I think they should have just called it "Mercenary-X: Set To Defy The Impossible." Much easier to pronounce and slightly awesome.

The biggest problem with this game is how it throws hordes of enemies at you without giving you an adequate weapons system with which to deal with them. The wide-open level layouts would have been ideal for cutting loose with some heavy-duty firepower, but Söldner-X instead forces you to pick at enemies with a paltry peashooter of a main weapon. Properly chaining enemies of the same type supposedly augments your firepower, but not enough in my opinion, and the whole chaining thing comes off as a cheap gimmick anyway. It's no where near as cleverly used as it was in the aforementioned Radiant Silvergun and Ikaruga. In what I suppose is the developer's idea of a gameplay innovation, a weapon can overheat if you use it too much—forcing you to switch to another gun while the other cools off—a truly horrible idea for a game like this. It's a bad idea not only because it severely limits the amount of destruction you can unleash, but also because of how utterly crappy the other weapons are.

One of the two selectable weapons you get at the beginning is the Beam, and man, do I hate the Beam. First of all, it doesn't look like a Beam. It looks like bolts of electricity. And yes, the bolts do go through otherwise impenetrable objects, but it isn't very strong when it comes to blowing shit up. In fact, you're more likely to be blown up yourself when using the Beam, so I never use it. The Pulse and the Bow aren't much better, though. In fact, none of the weapons you're given are very impressive, either from a visual or a gameplay standpoint, which to me spells certain doom for a game of this type.

So let's summarize: This is an action game that tells you to blow up the bad guys, but forces you to do so with weak weapons that don't look cool while at the same time imposing annoying gameplay restrictions? Oh, and I didn't even mention the boring story sequences in-between levels and a narrator that spews annoying sound bites while you play. No thanks. I don't care how fancy the graphics and effects are, or how loud the techno music is, there are so many great action games out there that allow me blow shit up in a multitude of satisfying ways, and now Söldner-X comes along and frustrates the hell out of me with bad ideas and boring gameplay.

My advice: Dig out a classic like Super R-Type, Thunder Force III or Galactic Attack. Not only will save yourself 10 bucks, but you'll have infinitely more fun than playing Söldner-X: Himmelsstürmer.