A Masterclass in Mayhem 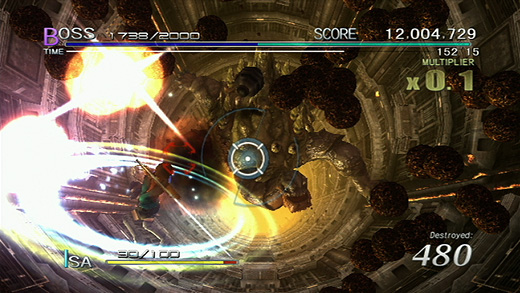 HIGH Finding yourself overwhelmed by giant bubbles in the underwater stage, then realizing you can turn them into missiles by hitting them with your sword to unleash all kinds of destruction.

LOW Playing the so-called "2 Player" mode with a friend for the first time expecting chaos of the highest order, only to discover that the second player really doesn't get to play at all.

WTF When a boss rips off a piece of itself, dribbles it like a basketball, and then throws it at you like you're its own personal bowling pin, you know you're playing a Treasure game.

I'm sure there will be those who will say I'm full of poop, but it's about time someone went ahead and stated the obvious: Treasure makes the best action games. Since the Sega Genesis days, they've been the Bob Clampett of video games—creating games that often have more ideas in a single level than most studios manage to put into an entire game. If you don't believe me, play Gunstar Heroes, Guardian Heroes, Radiant Silvergun or Ikaruga, and then try to tell me those aren't the best games of their respective genres.

If you happen to be one of those poor souls who hasn't been paying attention to Treasure's exploits, now's your chance to get yourself acquainted with the modern masters of disaster. Sin & Punishment: Star Successor is out on the Wii, and it's as good a game as Treasure has ever made. It's so good that if this game isn't on everyone's Top 10 lists at the end of the year, I'll maybe think about running through downtown Seattle wearing nothing but a Wii Remote Jacket.

A sequel to a Nintendo 64 game that was never released in North America until its debut on the Wii Virtual Console in 2007, Star Successor represents the natural evolution of the old-school, side-scrolling shooter disguised as an update of Space Harrier or Panzer Dragoon. It is a third-person, on-rails shooter just as those games are, but honestly, it plays like Gunstar Heroes for a new generation.

This game is pure poetry in action gaming. Running and flying and shooting and dodging through the game's well-rendered and beautifully designed levels using the Wii Remote and Nunchuk is a genuine thrill—that doesn't happen often these days. Successor achieves critical mass less than five minutes in and doesn't let up until you've beaten the game or it's beaten you (which happened to me more times than I could count). 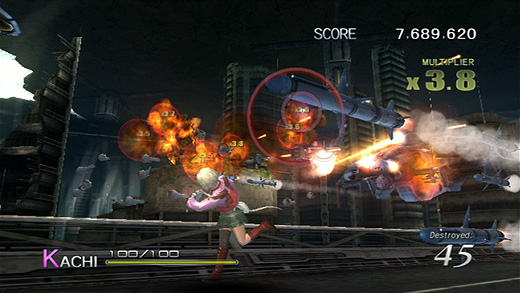 The game's beauty is in its simplicity. You play through the entire game with same level of firepower as when you started (the only power-ups are for health). Shooter fans might scoff at this, but it actually works brilliantly because the gameplay is tuned accordingly. Your gun also doubles as a sword, which lets you unleash four-hit combos on bad guys when they're close, not to mention deflect incoming missiles and other assorted projectiles right back from whence they came. You also get unlimited use of a special shot that does plenty of damage but requires some charge time every time you use it.

Treasure gets maximum utility out of this simple set-up with stages and bosses that require intelligent usage of all of your abilities. Mastery of the deflect attack and the quick-dodge maneuver is particularly essential for getting through the game's later stages. I love games that are built around your powers to navigate its world, and then through good design force you to push those powers to the max to survive. Successor does even better by making it all a lot of fun.

I don't have the time or space to go through all the fun ideas and situations Successor throws at you, but I at least have to mention a few. During the escape scene at the very beginning, there's a great, not-so-subtle throwback to the original Contra–which was developed by some of Treasure's team before they left Konami. The next stage is an underground city that twists and turns all around you—much like the environments in Ikaruga—as you dart under highways and in-between skyscrapers. Later in the game, the gameplay perspective shifts to the old-school, side-scrolling viewpoint for an entire stage, but unlike most games of this ilk, you're not limited to one-directional firing because the controls remain unchanged. The fabulous water tube stage features bad guys who ride the inside of the tube on jet skis and fire rockets which can be redirected at the giant sea serpent chasing and snapping at you. That stage also has sea creatures that emit giant bubbles which can be turned into deadly underwater missiles by hitting them with your sword—now that's fun game logic! There are even a couple of bosses you have to fight melee style, and in one instance late in the game, the fight is actually presented like a Street Fighter-style fighting game.

I feel I'm not doing the game justice, but take my word for it: Playing through the first three or four stages, I can truly state that Successor showed me things I hadn't seen before, such as a boss that morphs into an orca and fights you alongside his orca friends; as well as some things that I had seen before just not done this well, such as the Forgotten Worlds-style gameplay turned on its head. And then, in true Treasure style, the game's second half takes you inside someone's dream, and things really get strange and wonderful.

And hard. Man, is this game hard. "Punishment" is the key word here. The reason this review is coming out so late is that it took me much longer than originally anticipated to finally beat the damn game on the "Normal" difficultly setting. Yeah, go ahead Mr. Hardcore Schmupper: Tell me that I suck at video games. I'm here to tell you it takes some skills if you wanna see the end credits of this game, just like the old days. I didn't care how many hundreds of continues I burned through, when I finally defeated the last of the many crazy bosses this game throws at you toward the end, not only did I feel like I survived something that I'll never have to do again if I choose not to, but also a genuine sense of kick-ass accomplishment—as if I had subdued a big scary monster using only my cat-like reflexes and ninja moves. And it was fun, but the thought of attempting to beat the game on "Hard" makes my balls ache. 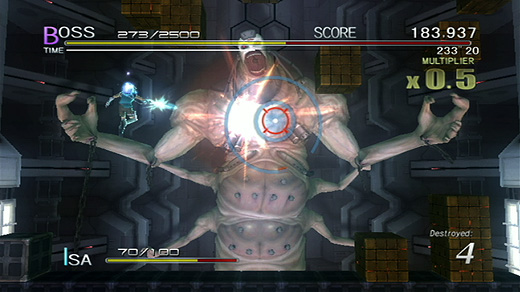 Also, I've gotta mention—just like the great action games of old, Successor has a great soundtrack. The water tube stage in particular is played to a track that fits the action perfectly, and I love it when that happens because most modern game soundtracks put me to sleep. Fans of Gunstar Heroes will also notice a couple of familiar tunes as Treasure continues to pay tribute to the game that put them on the map.

While Successor achieves near perfection during gameplay, it almost fails spectacularly in a few other areas. First of all, the story in this game is stupid and often incomprehensible, and the cinematics between stages are as poorly conceived as they are terribly animated, but you gotta love a game that contains the immortal dialogue:

"Now what do we do?" says sidekick Kachi.

"Now we run like our lives depend on it. Because they do," answers our generic anime hero, Isa.

You can easily skip through the unnecessary cinematics should you choose to be spared of such hilarity. I know there are fan boys out there who will probably online-bitch at me for saying so, but storytelling has never been one of Treasure's strong suits. However, I'll give Treasure the benefit of the doubt as to the above travesty, as I believe Nintendo of America's localization department was responsible for that howler.

A bigger problem is the game's two-player option, which is pretty much a waste of time. Instead of true co-op mode in which two characters fight together on-screen, the second player is limited to crosshairs-only shooting—doing slightly less damage per shot and with no charge attack. In short, it's no fun at all for the second player, which is too bad because I can see how a real two-player co-op mode would have gamers beggin' for buttermilk.

Also, and it's a minor gripe, but for a game in which so much blows up, it's kind of a drag that it doesn't look just a bit cooler when stuff 'splodes. Radiant Silvergun, Ikaruga and Gradius V had some of the best video game explosions I've ever seen, but somehow in Successor, most of the them kind of look like Nintendo 64 quality (although they do sound great). I'm sure this was a compromise Treasure had to make to keep the game running at 60 frames per second, so in the end it was probably a wise decision. On a completely unrelated note, the menu screens are surprisingly uninspired and blah.

This is still one of Treasure's best games, however. With Sin & Punishment: Star Successor, Treasure continues its recent trend of releasing their unique brand of action for Nintendo's underpowered game platforms—Game Boy Advance, Nintendo DS and Wii—as if to say to Microsoft and Sony, "We don't need your fancy graphics to make good games!" The Wii may not have the best graphics, but it does have its strengths. This game is perfect for the Wii, so I hope it finds an audience. I doubt I'll play a better action game this year.

Disclosures: This game was obtained via purchase at a Toys R Us in Seattle and reviewed on the Wii. Approximately 15 hours of play was devoted to single-player modes (completed one time) and two hours of play in multiplayer modes.

[quote]I’ll give Treasure the benefit of the doubt as to the above travesty, as I believe Nintendo of America’s localization department was responsible for that howler.[/quote]
I am not going to be so kind to Treasure, because I bet it had nothing to do with localization. The original had some hilariously moronic lines and it was never localized. It’s been ages since I played the first, so I don’t recall any actual quotes, but the story and dialogue was straight cheese.