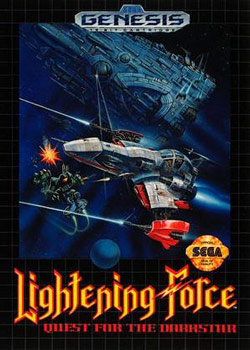 First of all, this game should have been called Thunder Force IV as it was in every other part of the world. The lame jackasses in marketing at Sega of America are responsible for this travesty of a title. Let's do a brief analysis …

Lightening Force: Quest for the Darkstar. For the love of Christ, that's not even the proper spelling of lightning—at least not anymore! I think people stopped using that spelling just after Chaucer died. According to Dictionary.com, "lightening" now has something to do with the uterus descending into the pelvic cavity in the late stages of pregnancy, so maybe these morons at Sega had something else in mind for this game.

And "Quest for the Darkstar?" What is that about? The game's cheap, black-and-white instruction manual actually elaborates on this unfortunate premise with an utterly laughable story that I won't give further attention by regurgitating here. This is what infuriates me about the executive and marketing side of the game industry. These people actually think they can do it better than the creative people responsible for making the game. What justification did these simpletons at Sega have in rewriting the storyline in Technosoft's prized action franchise? Thunder Force III was a huge hit on the Genesis two years prior. They had to think the sequel would sell at least as much, so they try to change the story? Granted, Technosoft's original story was hardly high literature. In fact, Thunder Force III was famous for its poorly translated in-game narrative, but it was 90 million-times better than this "Darkstar" garbage. So in retaliation for one of the many blunders in Sega of America's long, storied history, the game will be known as Thunder Force IV from here on out.

Thunder Force IV is one of the best action games for the Sega Genesis—a platform loaded with great action games. However, it is not a better game than its great predecessor. It really wants to be. It really tries to be. It's surely one of the best-looking games ever released for the Genesis, and its production quality across the board is top-notch. It's in its over-reaching design choices that the game falls short of greatness. 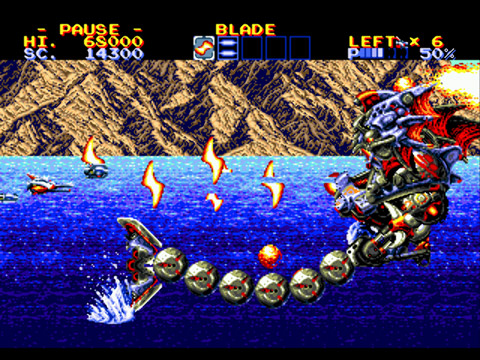 You can't really fault Technosoft for trying new things with this game. Fans of the series were expecting something new with this installment, but how do you improve upon near perfection? For one, you can move your ship a full screens-length up and down while the action scrolls along horizontally. In theory, this would give you more room to maneuver, but there's no indication of where objects are off-screen, so this actually makes it easier to miss power-ups and crash into enemies. This was fixed in the sequel, Thunder Force V, which implemented a heads-up display that highlighted off-screen objects.

More problematic was the decision to mess with the weapons system. I loved all of the weapons in Thunder Force III—not only for the way they looked, but for their usefulness. In Thunder Force IV, the Sabre, Lancer, Fire and Wave weapons have been replaced with Blade, Rail Gun, Snake and Freeway respectively.

These new weapons still look cool for the most part but aren't as practical as their fore bearers. The Lancer-Rail Gun and Fire-Snake changes are mostly even swaps. However, Blade doesn't come close to the awesome destruction of the Sabre, and the Freeway weapon is just a pain in the ass to use.

It's easy to see why these changes were made. The addition of the wider playing area demanded new weapons to cover all of that open space. This was certainly the reason for the Freeway, though I don't think it works very well. I'm sure the Sabre was scrapped to accommodate the Thunder Sword—a powerful, charge weapon you acquire in the game's later stages. The Thunder Sword is so strong that they probably needed to tone down the effectiveness of the main weapon to balance things out. Even so, I think the weapon changes hurt more than help overall, but at least the kept they Hunter—a weapon which has became a staple in the series. 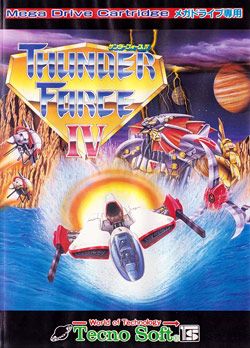 Honestly, these are my only real problems with the game. My only other gripe—and this is minor—is that Thunder Force IV is not quite as accessible to as wide an audience as Thunder Force III was. Indeed, Thunder Force IV is relentlessly difficult, especially in the game's later stages. Make no mistake, this game was made with hardcore gamers in mind, and that's not necessarily a bad thing. However, I still can't beat this game without using the 99-lives cheat in the option menu. The game's last two stages are just merciless, especially in "Maniac" mode. Much respect goes to those of you who can beat the game in this mode on a single credit.

Thunder Force IV is still a high-quality action game—one of the best of the 16-bit era. This game couldn't have been ported to the Super NES and remained intact due to that platform's difficultly handling high-powered action games. It was tried by Seika with Thunder Force III, in the form of Thunder Spirits, and the result was less than pleasing. It's evident that Technosoft wanted to make the ultimate Genesis shooter with Thunder Force IV, and they damn-near pulled it off. You have to give them props for that.