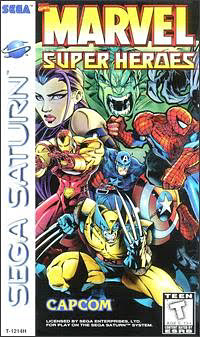 If there's one advantage the Sega Saturn had over the Sony PlayStation back in the mid- to late '90s, it's the fact it could do 2D action games really well. This advantage was exploited in Japan—a market which saw many such games released, often to critical acclaim, and helped the Saturn stay competitive with its upstart rival for a short time. Unfortunately, Sega of America unwisely—some might say stupidly—chose to not to release such gems as Radiant Silvergun, Metal Slug and Dungeons & Dragons Collection for their North American audience. Japanese gamers could even buy special cartridges that boosted the Saturn's RAM capacity by up to four megabytes, which allowed games like Capcom's X-Men vs. Street Fighter to run at a blistering speed with all of the arcade version's spectacular animation intact. Savy Saturn owners like myself were forced to import these games—often at a considerable expense we could only justify by knowing we were playing the coolest console action games around.

Capcom was among the few developers that not only took full advantage of the Saturn's 2D capabilities but also released many of them in North America. It made sense. Capcom's considerable library of excellent 2D fighting games were a perfect fit on the Saturn—not only was the hardware well-suited for them, but the Saturn controller was laid out in a similar configuration to Capcom's arcade control setup as opposed to the less-than-ideal button layout on the PlayStation controller. As a result, games like Street Fighter Alpha 2, X-Men: Children of the Atom and the Darkstalkers sequel Night Warriors shined on the Sega Saturn.

The Marvel Comics-licensed title Marvel Super Heroes is unique among Capcom's North American releases in that is supports the Japanese 1MB RAM expansion cartridge despite the fact the accessory was never officially released here. Thankfully, I was smart enough to buy the something called the ST-Key back in the day—a third-party accessory (not approved by Sega) which not only allows a North American Saturn to play Japanese Saturn games but also includes four megs of additional RAM for the select games that use it. Marvel Super Heroes would be practically unplayable without this device, but because Capcom wisely choose to sneak in support for it, the game is a contender for at least the best-looking fighting game on the system (aside from X-Men vs. Street Fighter, which was only released in Japan).

Truth be told, the visuals alone remain the most compelling reason to play this game, but then again, I'm an animator who works in video games. I always appreciate games that make animation a priority while also keeping the gameplay fun and exciting. The typical fighting-game fanboy might take more notice at the appallingly low number of selectable characters for a Capcom fighting game. Two slots are absolutely wasted on the little-known characters Blackheart and Shuma-Gorath—especially considering how Marvel mainstays like Thor, Dr. Strange, Cyclops, Nightcrawler, The Punisher, Ghost Rider and anyone from The Fantastic Four are nowhere to be seen. I was huge into Marvel as a kid and collected comic books for a long time, and I had never even heard of Shuma-Gorath until this game. Who's the genius at Capcom who thought it would be more fun to play as a pink, one-eyed octopus rather than The Mighty Thor? 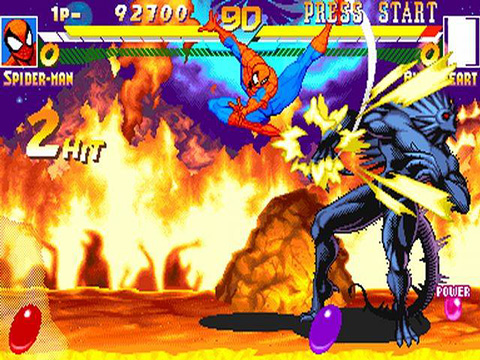 There are a couple extra characters who become playable upon entering secret codes at the character-select screen—the boss characters Dr. Doom and Thanos— but it really gives me a pain in the ass when a game requires me to enter a code for a feature that should be there by default. But let's say I give the game a pass there: That's only 12 playable characters that don't quite represent the diverse and unusual Marvel universe we all know and love. The Silver Surfer in particular would have been a perfect fit for this game considering it's set in The Infinity Gauntlet storyline (strange coincidence that it was during The Infinity Gauntlet run in 1991 when I stopped buying comic books for good).

It must be stated, however, that the Marvel characters included in Marvel Super Heroes look pretty amazing and are a lot of fun to play. Spider-Man and Iron Man in particular bust out all kinds of cool moves and are a great showcase for the hyper-stylized animation for which Capcom has become famous. Much care was taken to keep all of the heroes and villains true to their counterparts on the paneled page. It's great fun to hear Spider-Man say, "My Spider Sense is tingling!" or "This one's for JJ!" as he takes his own picture after winning a match. Comic book fans should appreciate that much attention to detail.

Marvel Super Heroes is so true to the original arcade version of the same name that it's easy to forget you're playing it on a Saturn, with one important exception: The ridiculously long load times. As fast as the action is during a fight, it's equally slow while the game loads in-between rounds. Granted, double-speed CD-ROM drives were the norm when PlayStation and Saturn launched in the mid-'90s, but holy moly do they show their age nowadays. Other minor knocks against Marvel Super Heroes include a lame gameplay gimmick based on the plot from The Infinity Gauntlet that allows characters to power up using a variety of gems that in the end doesn't really add to the tried-and-tested Street Fighter II formula. There's also substandard artwork and hokey plot lines during the many end sequences, but the same could be said for practically every one of Capcom's fighting games at the time.

Playing Marvel Super Heroes on Saturn won't make you forget the fighting-game perfection that is Street Fighter Alpha 2, but the game is somewhat of a technical marvel in how just a little boost of extra RAM could turn the Saturn into an arcade powerhouse. It's also a sad reminder at what might have been possible had Sega played its one trump card in time to save the doomed Saturn.