I was happy today to find in my inbox an access key for the new Good Old Games digital store, an opportunity to try the beta and get my paws on some classic video games. What, do you ask, is Good Old Games? GOG.com is a new store from The Witcher developer CDProjekt that offers digital copies of classic PC games, at low prices and without any pesky DRM. As someone who has tried and failed to find a number of the games that are already available for purchase at the site, I think this service has the potential to garner a significant following.

The store is slick-looking and easy to navigate. Games can be found by price ($5.99 or $9.99), category, publisher, developer, and user rating. There is already a lively user forum with subforums for virtually every game available on the site, and the support section is very well organized and informative. With only two publishers on board—Codemasters and Interplay—the selection is a little sparse, but there are already some notable entries—not the least of which are the two original Fallout games, which will undoubtedly be very popular with the imminent release of the third. I cracked a smile at the sight of one of my old favorites, one I played on the Dreamcast years ago—MDK2. The definition of "classic games" seems like it could be a little loose too, with Colin McRae Rally 2005 slated for release "soon", according to the site.

The site is significant for a couple of reasons. First, the PC platform is long overdue to have an easy, one-stop shop for older games. Most of these games are difficult to find in stores, and some of them may be hocked on eBay at inflated prices. If enough publishers jump on board, GOG.com will be a great way for gamers to get their hands on old favorites or try classic games they missed (I must confess that, because I was not a PC gamer at the time, I have not played the original Fallout games, so I'm excited about the prospect of comparing them to the sequel later this month).

But more significantly, GOG.com is an experiment in DRM-free PC games. Based on the success of some other companies from Bethesda to Stardock as well as the success of DRM-free music services, CDProjekt has every reason to be optimistic. If GOG.com is successful, it may pave the way for the erosion of the increasingly intrusive DRM that has created a great deal of antagonism between developers and the gamers who support them. I have no idea how many beta keys are left, but now is as good a time as any for nostalgic old goats and younger gamers alike to give it a try.

Just a sampling of the news this month in PC gaming:

There's little disputing that piracy is a serious problem on the PC. It's also a problem for consoles, but it's certainly more prevalent on the PC. Unfortunately though, there's no real solid data to give us a clear picture just how big of a financial impact piracy really has. A study in 2004 found that music piracy, long blamed by the music industry for a decline in CD sales, was mostly unrelated to the decline. It's difficult to say whether this holds true for the PC as well; most piracy happens in Asia and Eastern Europe, so it's unclear whether game makers are really losing customers to piracy en masse.

But whether or not piracy is actually harming companies' bottom lines, it's clearly having a strong effect on their perception of the viability of the PC market. It's not unlike a bear market, where anxiety over stock viability creates a buying freeze. In other words, developers like Epic, Ubisoft, Capcom and id may be creating a self-fulfilling prophecy by relegated the PC to a second-class market.

At the same time, whether data supports them or not, developers are quick to blame piracy for any perceived lost sales. Epic, for example, dropped the ball last year with the PC port of Gears of War. The game was released a year late at full price with sparse new content, was not available through any of the many popular digital distribution channels such as Steam and Direct2Drive, and received bad word of mouth due to numerous game-breaking bugs resulting from a sloppy implementation of Games for Windows Live which, to add insult to injury, required a paid subscription to access all the online features. And yet Epic seems all too willing to ignore these factors and just blame piracy. I'm not singling out Epic—similar comments have come from Crytek, Infinity Ward, and many others. While piracy may indeed be an issue, the perception of piracy is clearly just as serious a problem, one that may prevent developers and publishers from addressing more immediate problems in their business models.

The response from developers and publishers to this possibly real, but unquestionably perceived threat of piracy has been to lace their games with more and more stringent DRM restrictions. When I wrote a blog chiding gamers for blowing DRM out of proportion, I was heavily criticized for failing to recognize that DRM really does create problems for a lot of users and, so say many, it just makes piracy worse. In retrospect, I was wrong to understate the impact DRM has on users, as well as wrong to overstate its efficacy. Clearly no DRM scheme does much of anything to prevent piracy—even the most heavily protected games are leaked very quickly; and clearly many legitimate users are inconvenienced by increasingly draconian DRM schemes—I've been there myself recently.

And yet, it's not clear to what extent DRM is hurting PC game sales if at all, or whether it makes piracy worse as some suggest—though both are valid possibilities. Again looking at music sales, some data suggests that Apple's DRM-free iTunes Plus may spur greater sales, and Amazon.com has seen great success with their DRM-free music service.

I applaud CDProjekt for their ambitious DRM-free Good Old Games service, and I applaud Bethesda for sticking with a simple CD check for Fallout 3. Ultimately the success or failure of DRM-free software will determine whether frustrated developers will continue to get away with blaming piracy for their woes, and whether DRM use continues to be prevalent. Regardless, it's time developers and publishers take a more critical eye toward their perception of piracy's true impact on their business, and start treating their customers a little better. As long as developers treat PC gaming as a second-class market, that's exactly what it will be. 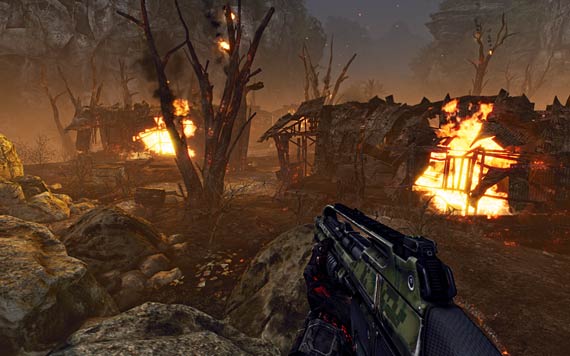 Crysis Warhead is finally upon us, and that can only mean one thing—more tweaking! Before reading this guide, it is imperative that you read my original Crysis optimization guide, as I'm not going to re-explain how to alter configuration files or access console commands. The engine is largely the same, and all of the information from the previous guide is still valid. Fortunately though it is far less necessary to use "tweaks" to get great performance from Crysis Warhead due to heavy optimization of the game engine.

Crysis almost certainly did fall short of its sales potential, even if it sold over 1 million, and piracy may indeed have taken a significant toll. But it's not because the game is too system-intensive, or because the game wasn't any good; rather, it's because Crytek overlooked one of the key channels for modern PC gaming: digital distribution.

The response to my previous post has been remarkable; clearly, many gamers are passionate about DRM and its place (or lack thereof) in PC gaming. I've read through all the comments, and would like to take a moment to respond to them.

Bioware's highly acclaimed and formerly XBox 360 exclusive RPG Mass Effect is fast approaching its release on the PC. Most PC gamers were undoubtedly pleased to hear about enhanced graphics, faster load times, and a re-designed menu system; but it's likely that fewer were happy to hear about the evil digital rights management that will be unscrupulously bundled with the game.

This week, Crytek president Cevat Yerli, mastermind of the next-gen blockbuster Crysis, mentioned in an interview that his company will no longer produce PC-exclusive games, asserting that piracy has become so rampant on the PC that making exclusive games for the platform is too risky. 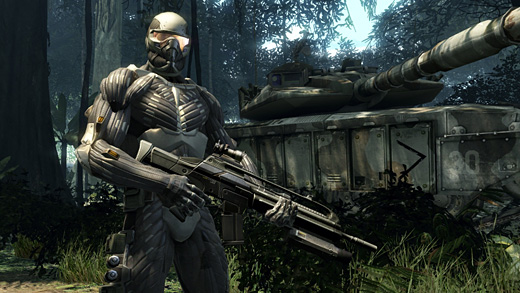 I don't care what Cevat Yerli says about their "upscaling" game engine, Crytek's partnerships with Intel and nVidia, or the many gamers (including me) who insist that Crysis scales well and runs just fine. The reality is that this is a game that, despite a relatively lengthy development cycle, was probably released one generation of hardware too soon. 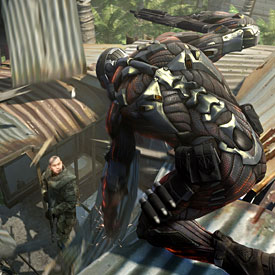 Far from a brainless beauty, Crysis is a rare gem of a game in which all of its elements gel seamlessly to create an immersive and rewarding experience that has unequivocally raised the bar for all shooters to come.