A game as meaningful as its title 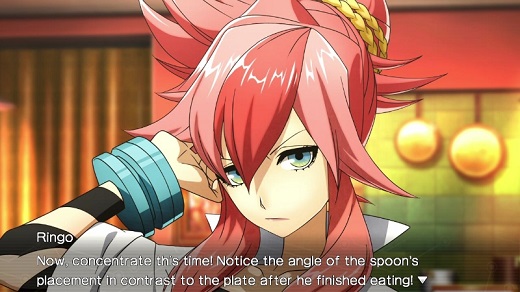 While it's a stretch to call visual novels the new hotness, there has been an ever-so-slight surge in titles seeing English localization. For those who don't know, VNs are text-based games that feature largely static images and occasional decision-making. A smattering of them have been making their way to Steam, including the infamous pigeon dating sim Hatoful Boyfriend. The Vita has also seen some standout releases in Danganronpa and Zero Escape: Virtue's Last Reward.

With publishers increasingly willing to take a chance on the genre, XBlaze – Code: Embryo was a fairly safe bet for Aksys Games. As a prequel to the well-known 2D fighting series BlazBlue, it already had the benefit of appealing to an established fanbase. But, rather than taking familiar faces from the fighting games, XBlaze introduces a new cast and a story far enough removed from the main plot to be an entry point for newcomers.

Set 150 years before the events of BlazBlue, XBlaze – Code: Embryo follows Touya Kagari, an unremarkable high school student who lost his mother in an accident and has been living with the family of his friend and classmate Hinata ever since.

One night, on his way home from his part time job at a curry restaurant, he hears a strange ringing sound and suddenly finds himself being attacked by something that used to be human. A machine-like warrior girl named Es comes to his rescue, and upon returning home, he's greeted by a slew of strange characters who claim to be coming to his aid while dragging him into a dangerous conflict.

To be clear, XBlaze is fundamentally a harem narrative. From the beginning of the story, Touya is an "average teenage boy" who attracts four adorable-yet-capable girls who inexplicably vie for his attention. The five main characters all neatly fit into the usual anime clichés, and though they do see slight growth over course of the story, there are ample humorous exchanges and fanservice staples (such as bathing scenes) that make the uninspired narrative hard to take seriously as a whole.

Since XBlaze was developed by the same studio that handles the BlazBlue fighting games, it doesn't come as a surprise that it stands out with strong art direction and cinematic storytelling.

Unlike most visual novels which feature barely-moving character portraits on static backgrounds for extended periods of time, XBlaze moves quickly from one "camera" angle to the next, giving a very dynamic, proto-anime feel. Also, all dialogue is fully voiced, aside from the integral TOi system (more on that shortly), which is both praise-worthy and a detriment. While it keeps things moving fast, it also removes the protagonist's internal dialogue and the opportunity for world-building afforded to visual novels that include descriptive text.

Another place where XBlaze deviates from visual novel conventions is in the TOi, or Technology of Interest, system.

This social network-like feature is introduced as an important part of the XBlaze world and provides Touya with news and information catered to his specific interests. Instead of offering text-based choices to the player at integral moments in the story, the game's narrative progresses based on what articles have or haven't been read in TOi.

Though the game did make it clear that it was up to me to choose what to read or not, for the sake of completion I read every single item that became available over the course of the game, leading me to one of the game's many endings.

After completing the game once, all articles on TOi updated with different character icons beside them to help steer me towards other character-specific endings I hadn't seen yet. I had had more than enough of XBlaze's narrative after 12 hours, so I didn't bother going back to see what would happen if I only read certain articles, but it's worth noting for those unfamiliar with the dead-end structure of visual novels—it could be very easy to get stuck and be unable to proceed if all TOi articles aren't read in the first playthough.

What makes TOi particularly excruciating, however, is not how unclear it is about what's used to dictate progress, but that I was constantly required to open a ‘program' to read mind-numbingly boring news articles and posts in the middle of dialogue.

To me, requiring the player to learn about the world by reading rather than experiencing it is not only lazy storytelling, but lazy game design. Of course I could not read the TOi articles and simply open them to mark them as "read", but then I'd miss out on information that's actually vital to the main narrative. Call me old fashioned, but I much prefer the traditional VN method of progressing the story through multiple choice options.

XBlaze – Code: Embryo isn't the most offensive visual novel I've ever played, but it's ultimately dragged down by a lackluster story, dull characters, and the infuriating TOi system. Considering the other visual novels on the Vita, it falls particularly short, though hardcore BlazBlue fans may appreciate the allusions to the rest of the series.

Players dying to see a visual novel with a slightly-higher-than-average budget will likely be impressed by the presentation, but I couldn't help feeling that all the cash spent on glitz would have been better spent elsewhere. Rating: 5 out of 10


Disclosures: This game was obtained via publisher and was reviewed on the Vita. The PS3 version was not tested. Approximately 12 hours of play was devoted to the single-player mode, and the game was completed once. There are no multiplayer modes.

Parents: According to the ESRB, this game contains blood, partial nudity, strong language, suggestive themes, violence. While none of these aspects are more excessive than most of what is shown on western TV in the evening, there are scenes such as girls bathing together with only steam covering their breasts, and some swearing. The vast majority of violence is only shown in still images with traces of blood on characters' clothing.

Deaf & Hard of Hearing: This game is entirely text-based, so players with hearing challenges should have no problems.

It really is a shame that so many JRPGs and visual novels are just rehashing the same overdone anime tropes. Where’s the originality?

Also fully agree that requiring the player to gather crucial information about the main plot by reading about it is unbelievably lazy. The TOi would probably infuriate me.

I actually enjoyed the game quite a bit, and got somewhat emotionally involved with the characters. I also don’t know why everyone hates Toi so much… It really wasn’t that bad, though sometimes distracting.