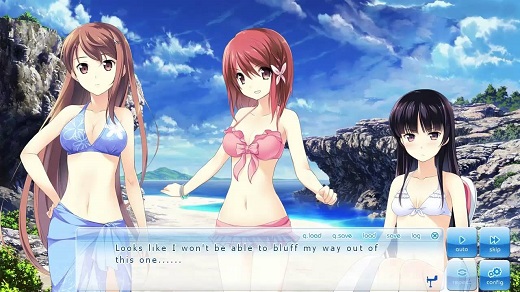 LOW: The translation is in serious need of an editor.

Visual novels are often stereotyped in the West as being sex-heavy clickfests, even though there have been numerous entries released in English that eschew the steamy stuff.

On paper the decision makes sense, as story-heavy text-based games that rely on extensive amounts of voiced dialogue, static illustrations, and occasional narrative choices have traditionally been viewed by Western publishers as cost-heavy investments with little reward due to their niche audience. But was removing content that appealed to its core audience the right move?

The premise of If My Heart Had Wings starts out as an anime cliché. After injuring himself in an accident that renders him unable to continue his dream of racing, protagonist Aoi Minase returns to his hometown to attend the local school and find a new calling in life. With a team of ragtag girls, he turns his sights on his school's Soaring Club and finds a newfound love for gliders, as well as one of his club mates.

While it's easy to say the story is meant to be a heartwarming romance that shouldn't be taken too seriously, absurd plot points like Aoi being hired as the caretaker for an all-girl's dorm make it difficult to appreciate some of the more poignant moments. I understand that as a straight cis woman I'm probably not the target audience, but scenes such as a top hat-wearing duck stealing panties from the physically-disabled Kotori also made me cringe.

Gameplay is standard fare for a visual novel, but it's important to note that as a bishojo game, If My Heart Had Wings is squarely aimed at people who enjoy controlling a guy while romancing cute anime high school girls. In its original form, this would culminate in one or more explicit romance scenes with one of the five available girls, but these have been removed for the English release.

Regarding these removed scenes, I understand considerable effort was made to completely erase any allusion to sex, including rewriting portions of the text. However, there were definitely scenes that stood out as being awkward, such as characters wearing towels while bathing, or the main character remarking on a girl's eyes when clearing looking at… other… areas of her body.

A few text-based choices throughout the game determine which character Aoi will end up with, but I found much fewer choices than the other visual novels I've played. Even with the lack of choice, there's easily over 30 hours of content depending on how fast the player reads. I personally found myself skimming through some of the more jargon-heavy flight-related discussions, but I appreciate that the game took its subject matter seriously enough to make that a significant part of the narrative, rather than just a backdrop.

If a bland romance with a unique theme and nice visuals was all If My Heart Had Wings had to offer, I'd be happy to give it a moderate recommendation. However, I can't overlook an unacceptable localization that's riddled with spelling errors, grammatical errors and writing that's in serious need of an editor. As a text-based genre, a good localization can make or break a visual novel. Unfortunately, not enough care has been done to make this text very interesting or readable.

While MoeNovel's attempt to appeal to a wide audience is admirable, I don't believe it was in their best interest to bring a sex-heavy Moe Game Award winner to market this way. With numerous all-ages titles available in Japanese, it seems a shame to alienate a portion of If My Heart Had Wings's audience by removing desired content, while not polishing it enough to make it recommendable to others. Hopefully this fledgling company will learn from their mistakes for future releases, as more visual novels in English are always welcome. Rating: 4 out of 10


Disclosures: This game was obtained via publisher and reviewed on the PC. Approximately 35 hours of play were devoted to the single-player mode, and the game was completed twice. There are no multiplayer modes.

Parents: According to the ESRB, this game contains: mild language and suggestive themes. There are definitely some sexual references, such as prolonged shots of the girls' legs and chests, as well as comments about bust size, etc. However, all explicitly sexual content has been removed from the English version.

Deaf & Hard of Hearing: The game is entirely conveyed through text, so players who are hard of hearing will not miss out on anything.

“Top hat wearing duck that steals panties.” If that was the protagonist, I’d definitely play this game. But it’s never worth investing time in a visual novel when the localization team clearly didn’t care about providing a proper translation.

OT: One of the Captcha words I had to enter was “respect.” As soon as I finished typing it I started humming the song by Aretha Franklin.