The World is Miku's 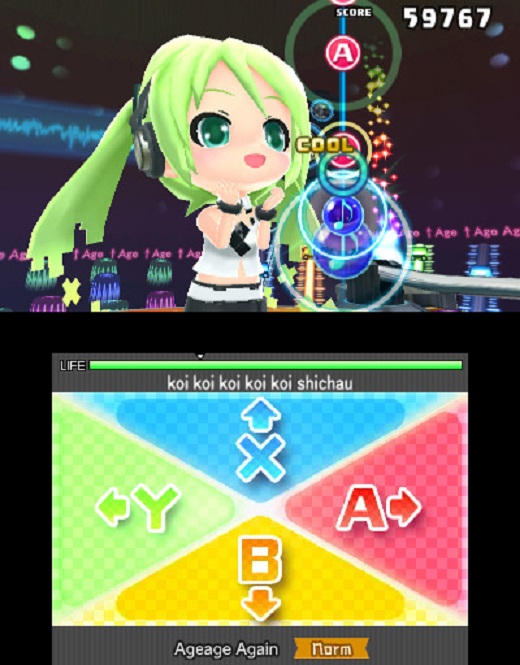 LOW Trying to talk to my Vocaloids using the microphone.

A virtual pop star may sound like something that's too sci-fi to be real, but Hatsune Miku is as real as an entirely synthesized singer can be. Featured on David Letterman and having opened for Lady Gaga, the Japanese idol is an international sensation despite the fact that she doesn't really exist at all. Considering her ever-growing popularity, it should come as no surprise that she's now moved on to conquer the 3DS in her latest English release, Hatsune Miku: Project Mirai DX.

Project Mirai DX is the third entry in the Mirai series of rhythm games. With an increased song roster and additional mini games, it is the ultimate version in every way, leaving no room to be disappointed that the previous two releases were never localized.

The core game comes with 48 songs that can be customized with different vocalists for a total of 79, counting all variants. Each song comes with two difficulty levels to start (with a third unlockable) and the option to use either touch or analog controls.

The touch option, also known as tap mode, requires players to tap one side of the touch screen or the other depending on which color is displayed on the top screen. Just like nearly everything in the game, these colors are customizable. Occasionally, there will also be a prompt to swipe quickly in one of four directions. This mode is relatively breezy, and I was able to whiz through the hard mode, even though I typically hit a wall fairly quickly in rhythm games.

Analog controls, on the other hand, actually offer the option to either press the X, A, Y, and B buttons, or the touch screen when prompted. In this mode, the touch screen is divided into four quadrants that correspond to the buttons, but having four variations instead of two makes it a bit more difficult. Anti-touch players will be able to get through the whole game without ever picking up their stylus, and I personally found the analog controls more rewarding due to the slight increase in difficulty.

Regardless of which control method is preferred, those who've played the previous Project Diva games will find the rhythm gameplay familiar. Instead of having a horizontal or vertical stream of commands flow across the screen, Hatsune Miku displays a snaking line over moving video, upon which commands appear in time with the music. Players not used to looking at so much movement will likely find themselves overwhelmed, which was definitely my experience when I first picked up a Hatsune Miku game.

However, I found this particular installment significantly easier than the Project Diva titles and most songs didn't give me much trouble, whereas there are still a handful of Diva games that I just can't beat. While it's hard to describe the sensation of playing the rhythm segments, I will say they feel ever-so-slightly clunky, and I'm not sure whether it's due to the 3DS hardware or the game itself. It may not be noticeable to everyone, but after coming from the Diva games, something about connecting notes in Project Mirai DX felt a tad sluggish at times.

Project Mirai DX is jam-packed with extras in addition to the base game. Believe it or not, one of the minigames is the first time in 10 years that a console Puyo Puyo game has been made available in North America! Players can also fully customize the character that greets them on the main screen, what they're wearing, and the room they're in. There's even the option to use the 3DS microphone to "talk" to the Vocaloids, though no matter how many times I called him, Len never seemed to respond to me.

Unfortunately, some of the features such as swapping profile cards and customized music videos are limited to sharing through StreetPass, which just won't be an easy option for many players. Online options here would have been welcome. I was also not able to test the AR mode, as the code provided by the publisher did not come with physical AR cards. I wasn't able to find any information about whether or not SEGA will be making AR cards available to those who purchase the digital version of the game.

Overall, the amount of content in Hatsune Miku: Project Mirai DX is simply staggering, and will surely offer hours of fun for Vocaloid fans. Rhythm game players that lack an interest in digital pop stars may not find as much to amuse themselves with here, but even as a lukewarm Vocaloid fan, I found the base game to be a great time even if it's not as polished or as challenging as some others. And hey, at the end of the day, having more rhythm games available stateside is never a bad thing! Rating: 7 out of 10


Disclosures: This game was obtained via publisher and reviewed on the Nintendo 3DS. Approximately 8 hours of play was devoted to the single player mode. The main rhythm game does not have a multiplayer mode.

Parents: According to the ESRB, this game contains: mild lyrics, mild violence. All songs are in Japanese, though some of the translations include lyrics that mention getting naked. There is no violence on screen, but some implied violence in the content of the music videos. I would say this game is suitable for any children who are old enough to play a fast-paced rhythm game.

Deaf & Hard of Hearing: As a rhythm game, this title relies very heavily on music and rhythm. As such, it is difficult to recommend.