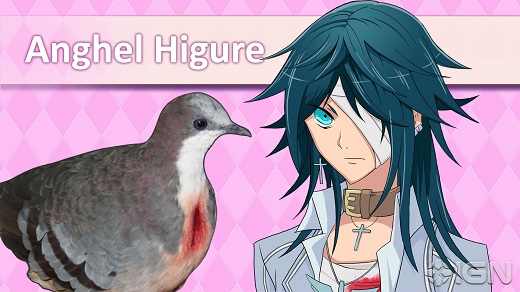 There are two kinds of people in the world; those who react to news of a pigeon dating sim with excitement, and those who react with disgust. Before Hatoful Boyfriend came to be, I never imagined I'd be trying to convince people to play a game where dating our cooing comrades is the order of the day, but here I am, and here we go.

Hatoful Boyfriend is, indeed, the infamous dating simulator where the player is a human girl inexplicably enrolled as a second year student at a high school for pigeons. At the beginning there's an option to view a humanoid or avian portrait of every major feathered friend upon first meeting them, but aside from that, literally everyone to be interacted with is… a bird.

The title stems from the Japanese pronunciation of "heartful"/"hurtful" and the word for pigeon, "hato." Like most dating sims, Hatoful Boyfriend is presented through ample text, static character portraits, and the occasional text-based decision that determines progress through the game. While it's 80% visual novel, there is the opportunity to raise certain stats on occasion by choosing to participate in math class, gym class, or music class.

The game encourages players to choose a prospective partner and then focus on them to get their ending. Each character's route is relatively short, running between 30-60 minutes depending on the bird. It doesn't sound like much at first, but with eight different pigeons to romance and even more endings to unlock, Hatoful Boyfriend has plenty of replayability.

In fact, the real meat of the game doesn't even open up until after the main routes. While I usually find the anecdote "it gets better later!" to be frustrating, there is a treat waiting after the dating sim portion of Hatoful Boyfriend. To this end, the game could have benefited from UI additions, such as a story tree showing what has been played and what branches have not yet been unlocked.

It's unfortunate that there's not more indication of this extra content from the game itself, but take it from me, beneath the bird puns and quirky characters, there's something sinister and complex underneath… Why are these birds gifted with the ability of human speech? What is our protagonist doing living in a cave? Was that an image of cityscape full of dilapidated skyscrapers? I found myself asking all these questions and more as I romanced my way through the teacher pigeon, introverted student pigeon, and sketchy nurse pigeon's storylines. It may be easy to dismiss the game for being weird, but seeing each pigeon's route pays off in the best way, making Hatoful Boyfriend so much more than "that goofy pigeon dating game."

If I were to fault Hatoful for anything, I would point to the fact that there is no way of knowing that such an important part of the story is available to unlock, and that many players will probably need a walkthrough to find it. Had I not known that there was something beyond the dating sim though word of mouth, I might have stopped after just a couple of routes, and that would have been a shame.

Ultimately, the most frustrating thing about Hatoful Boyfriend is how difficult the game is to convince others to play. However, those who don't write it off as a joke will be treated with one of the most unique dating sims available in English. And as for those who do write it off? Well, they probably couldn't handle the truth of Hatoful Boyfriend anyway. Rating: 8 out of 10


Disclosures: This game was obtained via publisher and was reviewed on a Mac. Approximately 15 hours of play was devoted to the single-player mode, and nine endings were completed. There are no multiplayer modes.

Parents: This game has not been rated by the ESRB. While most of the game's early content is child-appropriate, the true route turns into a murder mystery psychological thriller that contains horror elements and would not be suitable for younger children.

Deaf & Hard of Hearing: As a text-based game, this should pose no issue to deaf and hard of hearing gamers.

I give this game credit for being incredibly creative and weird, and while I have seen several LPs that provide a very, VERY interesting look into just how dark it can get… I’m not that interested in dating sims. Glad to see it’s becoming a cult hit, even if it’s not for me.