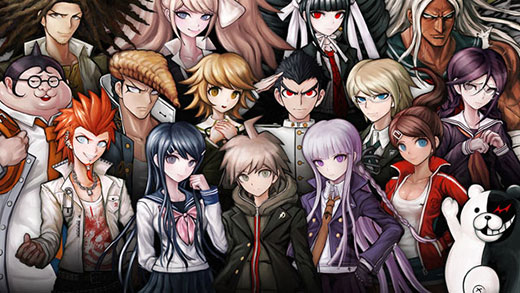 If you're an English-speaking fan of Japanese games, and particularly visual novels, there are few titles in recent years that have sparked as fervent a following as Danganronpa: Trigger Happy Havoc

. The title gained a huge following online after a very in-depth series of Let's Plays were published, and as a result, there were more than a few fans eagerly hoping for an English localization that initially seemed like a pipe dream. The fact that NIS America picked up the title was cause for much celebration.

I begin this second opinion with this brief history lesson because in my case, I feel the intensity of the love the game received from its fan community set impossibly high expectations to satisfy. As a result, when I got my hands on it and began playing, I was almost immediately hit with a wave of disappointment.

Any literature or film buff has probably heard countless scenarios similar to the setup of Danganronpa. In this case, a group of students are trapped in a school and forced to kill each other: the motivation for their violent acts being that if they kill someone without the other students knowing it's them, they'll be able to leave the school in one piece. The hook of Danganronpa was said to lie in its colorful cast of characters, but I went through the motions for the first trial, then the second, and even the third with absolutely no attachment to any of those who died, or any interest in the surviving students apart from a grim curiosity about who would bite the dust next.

This may sound cruel and cynical of me, but I want to use my general indifference toward the first half of the game to highlight the importance of my change of heart in the second half. It wasn't like the game suddenly flipped the "awesome" switch, or that there was a particular event that stood out to me, but as time went on and the cast of characters got smaller and smaller, I found myself finally being able to appreciate the interactions they had with one another. For me, Danganronpa was a slow burn, but when the fire finally got going, it was a roar.

The biggest thing detracting from my overall experience was that I felt I always knew a little too much. Investigation and trial sequences dragged on because I just wanted the characters to hurry up and figure out whodunit, or at the very least, piece together some of the clues I had put together myself minutes, or even hours, before. Rather than being too smart for my own good, I think the game was trying to achieve the right balance of giving the player enough to figure out the mysteries themselves while still throwing in a few surprises. Unfortunately, this didn't get quite succeed, particularly in the trial sequences, which often left me wanting to skip all the minigames and  just get on with it.

However, despite all the frustration and disappointment I felt in the early hours of the game, there was still plenty to keep me hooked and pull me through to the more compelling second half.

For one, the game's presentation is top-notch—its character designs may not be for everyone, but it's hard to deny sheer amount of pizzazz the game oozes from its visuals to its killer soundtrack. The voiceovers, particularly the original Japanese, are compellingly acted, and the script is sharp and humorous. It's also worth noting that there are a couple of characters that defy traditional binary gender expectations, and while their issues may not be handled in the best way possible, it's still appreciated.

A minor thing to note is that as someone who understands more of the context and references than the "average" Western player, some of the word choices such as "fanfic writer" felt slightly off, though I can understand the localization's need to appeal to a broader audience. There was also a very frustrating recurring error in the game's text that I assume must've been missed by an editor, but I can't divulge it for fear of spoilers.

may be a game that initially disappointed me, but it eventually turned out to be the most memorable gaming experience I've had this year. While 2014 still has many months and many game releases left, with how close Danganronpa came to reaching the high bar set by its dedicated fans, I'd be extremely surprised to see many games achieve similar heights. Now that NIS America has announced its more-polished sequel for this fall, I think its safe to say that Danganronpa will be on the minds of many for months to come. Rating: 7.5 out of 10


Disclosures: This game was obtained via publisher and reviewed on the Vita. Approximately 12 hours of play were devoted to the single-player mode, and the game was completed.