If you only play one otome game this year… 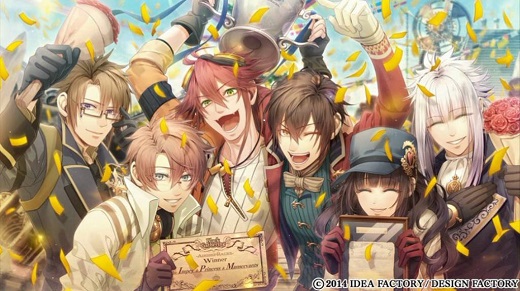 HIGH Cardia is the coolest otome game protagonist yet

LOW Everyone else has to be dated before Lupin is available

2015 has been an amazing year for otome games. As romance titles where the goal is to end up in a relationship with attractive men, the genre has historically been neglected in the west. Meanwhile, in Japan, it's not uncommon for at least one otome game to come out a week. With a whopping three PS Vita otome titles releasing in English this year, have western publishers finally realized the potential of the genre?

Code: Realize: Guardian of Rebirth is a steampunk-themed, action-packed romp. Players assume the role of Cardia, a girl with an unfortunate ailment. Her skin has strange, acidic-like properties that cause anything it touches to rot and decay. Her only memories are of her father, who left her abandoned in a house in England with instructions to wait for his return.

Though she starts off as listless and with little emotion due to being ostracized because of her illness, Cardia evolves into a competent, proactive woman who can keep pace with any of the men. It's extremely refreshing for an otome game to focus so much on the narrative arc of its protagonist, rather than placing all the importance on the male romantic leads.

Of course, the men get plenty of screen time, as well. Every guy in Code: Realize is loosely based on a character from western literature, from Arsène Lupin to Victor Frankenstein. True to his name, Lupin is a gentleman master thief, and very confident in his abilities. Other characters have more cursory connections to their namesakes, however. Victor, for example, is a skilled scientist, but is also kind, timid, and wears a pair of steampunk headphones around his neck. Rather than being a by-the-book reproduction, these references color the narrative and offer a wink for the literature fan.

The "common route" (the section of the story that's the same regardless of which decisions the player chooses) makes up the bulk of the game at a whopping eight chapters. Once the story diverges, Cardia will deepen her bond with one of the five main characters, offering some truly touching moments in between the action.

While romance is the overarching focus of otome games, Code: Realize presents an exciting narrative about Cardia trying to find her father and uncovering the secret behind her poisonous body. Along the way, she learns how to drive, how to defend herself, how to pick a lock, and more. She's a contributing member of the group, not just a passive cipher.

In contrast, those looking for a high level of romance may come out disappointed, as Cardia's affliction means there is a slightly lower number of touchy-feely scenes with the male characters than other otome games. Also, due to the length of the common route, it can feel like it takes a long time for her to get close to the characters. That said, I was very happy with how each of the romances played out.

However, it's worth mentioning that the main bachelor, Arsène Lupin, is not available until the player has seen at least one ending for each of the other four, and the game doesn't really make this clear to the player. Since Lupin's witty quips are one of the highlights of Code: Realize, this issue was slightly frustrating, but all of the men are appealing in their own right, though some have more compelling stories than others.

Aksys Games previously did fantastic localization jobs on Hakuoki: Demon of the Fleeting Blossom and Sweet Fuse, and Code: Realize is no different. Fans of localizations that transform the text into something that feels natural and unique in English will surely enjoy the extra flourishes added here. However, there were a few minor instances where altered names have caused of contention among some fans.

In particular, when Victor Frankenstein introduces himself, he says "call me Fran" in the original Japanese, leading fans following the Japanese release to refer to him as Fran. Aksys, however, has chosen to localize this as "call me Victor." It may make more sense in English, but it loses the "cute nickname" intention of the original. Players who keep an ear out for the Japanese audio may find it strange to hear characters call him "Fran" while the English text reads "Victor."

Ultimately, it will depend on the player whether localization decisions like this are welcome. As an overall package, though, Code: Realize is professionally presented and stands out as one of the best otome games available in English. In fact, if I could only recommend one otome game released in English this year, this would be it. With a strong female protagonist, exciting story, and likeable male characters, it's an exemplary title in the genre. Rating: 9 out of 10


Disclosures: This game was obtained via publisher and reviewed on PS Vita. Approximately 34 hours of play were devoted to the single-player mode, and the game was completed. There are no multiplayer modes.

Parents: According to the ESRB, this game contains: blood, mild language, mild violence and suggestive themes. There's action and some swearing, but it is all very tame compared with most evening television. Since this is a visual novel, all of the action is depicted with still frames and text. Preteens and older (basically, any children that would actually be interested in this game) should be a-ok.

Deaf & Hard of Hearing: Everything is explained via text and has no audio-only cues necessary to enjoying the game.