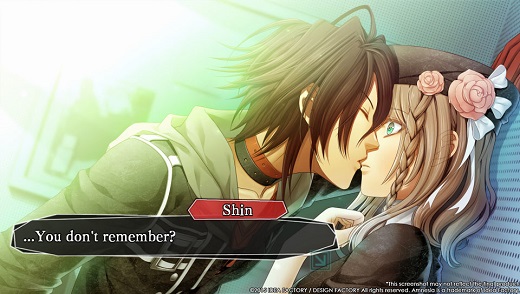 LOW … But they're all massive jerks.

WTF Being locked in a cage is not one of my personal turn-ons.

Despite the fact that the market for romance games aimed at a female audience barely existed outside Japan just three years ago, more Japanese titles in the otome game genre are finally getting proper English releases, and it's high time.

Due to being immensely popular among Japanese otome game fans, Amnesia: Memories has been at the top of Western localization request lists for many years. Now that it's finally out, however, some may find it's not quite as amazing as expected.

Amnesia: Memories is an otome visual novel, which means it's a text-heavy choose-your-adventure style game with branching storylines and multiple male suitors to romance.

While certainly not limited to female players, getting smoochy with gorgeous anime boys is a central aspect of the game. Unadventurous heterosexual men may find this isn't their cup of tea. In fact, some women may find the type of rude suitors featured in Amnesia: Memories to not be their cup of tea either, but I'll come back to that later.

Unlike other otome games, Amnesia: Memories starts with the main character already in a relationship with one of four (eventually five) potential boyfriends. This twist is made possible due to the main character waking in a strange liminal space where a fairy called Orion tells her he has collided with her consciousness, causing her to lose all of her memories.

Instead of taking the logical step and contacting a doctor or the police, the main character must team up with Orion to recover her memories by attempting to assimilate back into her everyday life.

At the start, players select the world they would like to inhabit, each representing a parallel dimension where the main character is in a relationship with a different man. I enjoyed how recurring characters were different depending on the chosen route, giving each a strong "alternate reality" feel, and every one is essential to uncovering the overall mystery surrounding the main character's amnesia.

Unfortunately, pretty much all of the romance-able male characters are epic jerks.

While each of them have their moments, the only one who didn't piss me off with every other sentence was Kent, and that was because he was too socially awkward to be that offensive. Infamously, one of the routes even sees the main character locked in a literal cage in her boyfriend's apartment, which is sadly not as kinky as it sounds. Compared to similar otome games, these boys can be downright mean, and there are a lot of questionable developments that may not sit well with some players.

Amnesia: Memories also suffers from a gameplay issue that plagues many otome titles-progression is determined by selecting one answer out of multiple options, but it's often not until much later in the game that the results of these choices come to fruition. While over 20 different endings may sound like a good thing, finicky questions and parameters that don't appear to matter until it's too late mean that getting the best end for each character is an exercise in patience.

In addition, the PC version does not have the PS Vita's quick save/quick load function despite offering multiple save slots, making it more cumbersome to go back to previous parts of the story.

After obtaining the four main best endings, the final, secret route unlocks, which is required playing for those who want to experience the full story. While I would say it's essential to play through everything to experience the game in its entirety, I wouldn't fault anyone for jumping ship after completing only one or two of the routes.

The story is melodramatic, and the English version suffers from some editing oversights, making it a rougher read than I would like in a text-based experience. It's also worth noting that the main character is basically a blank slate due to her memory loss, which means that supporting character Orion narrates the majority of playtime. Though it does make sense story-wise, I found it frustrating, and often wanted to tell Orion to be quiet for two seconds so the main character could speak for herself.

Despite these many annoyances, I will say that Amnesia: Memories is utterly gorgeous, and the Japanese voice acting is superb. The boys are infuriating, but even my cynical heart melted more than once during some of the romantic scenes.

Because of my love for otome games, I wish I could wholeheartedly recommend Amnesia: Memories to all fellow romance fans. However, I can't do so without warning of the many issues it has. Players who dig the brand of "I'm going to be a jerk to you even though I like you" boy that Amnesia: Memories prominently features, get ready to swoon. Those looking for a little kindness and a more compelling overall package, however, will likely come away disappointed. Rating: 6 out of 10


Disclosures: This game was obtained via publisher and reviewed on PC. Approximately 32 hours of play were devoted to the single-player mode, and the game was completed. There are no multiplayer modes.

Parents: According to the ESRB, this game contains: suggestive themes and mild language. Though the romantic scenes are pretty PG, there is definitely some innuendo, and some of the relationships can come off as borderline abusive. If Twilight is ok, this should be, too.

Deaf & Hard of Hearing: The game is entirely text-based, making it very accessible.