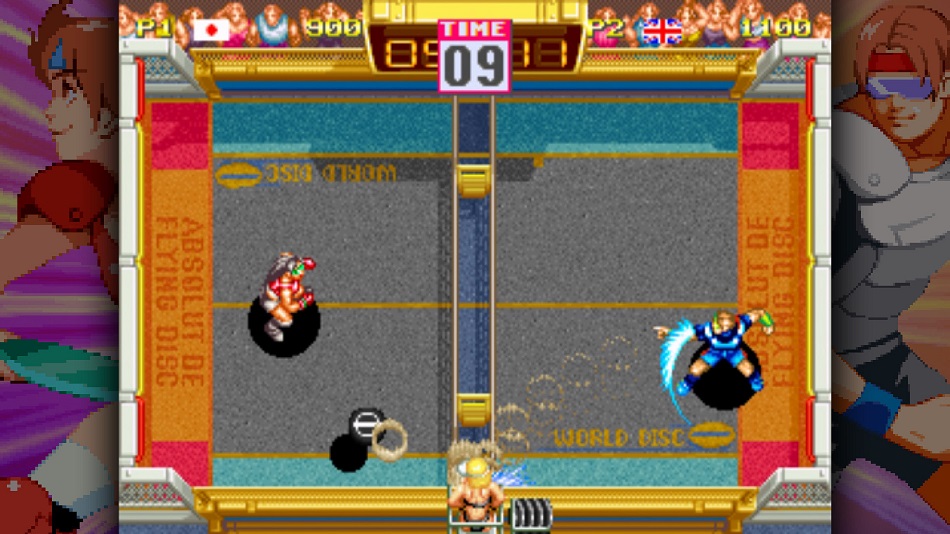 LOW Trying to catch lobs out of a slide is frustratingly hit-or-miss.

I was only a few hours into Windjammers and this review was already beginning to take shape.

“2017 is The Year of The New Retro Sports Game,” it would read, citing Windjammers and Pyre (the visual novel-meets-SNES-style-basketball game from Supergiant) as evidence. Look at all these developers creating new but retro-feeling sports games!

The problem is that Windjammers, developed and published for the PS4 and Vita by DotEmu, is not a new game. On the contrary, this 1994 cult classic originally released for the Neo Geo is so cult that I had never heard of it, and so classic that it feels like it was created for today’s audience.

The game’s aesthetic is pure ‘90s — bass that sounds like it was ripped from the Seinfeld theme song, sunny G-rated rap, and 16-bit character models in the vein of Street Fighter II, dressed in uniforms that wouldn’t look out of place in a Tae Bo video. Despite the retro look,  the depth of gameplay and responsive controls haven’t aged a day.

Basically, Windjammers is a fictional sport which incorporates aspects of tennis, air hockey and ultimate Frisbee. The top-down camera displays what is essentially a tennis court, complete with a net down the middle and four quadrants subdivided by white, painted lines. One player occupies each side of the court, serving as both offense and defense, attempting to throw a brightly-colored disc into their opponent’s goal which runs the entire width of the court. At the same time, they’re doing their damnedest to prevent their opponent from doing the same to them.

As in air hockey, bouncing the disc off the sides of the court is encouraged, and quarter- and half- rotations of the left stick add increasing amounts of curve to the disc. Sending it sailing into the larger yellow portions of the goal will net the player three points, but scoring in the smaller red sections is worth five, so bouncing and curving at angles is required for maximum points. 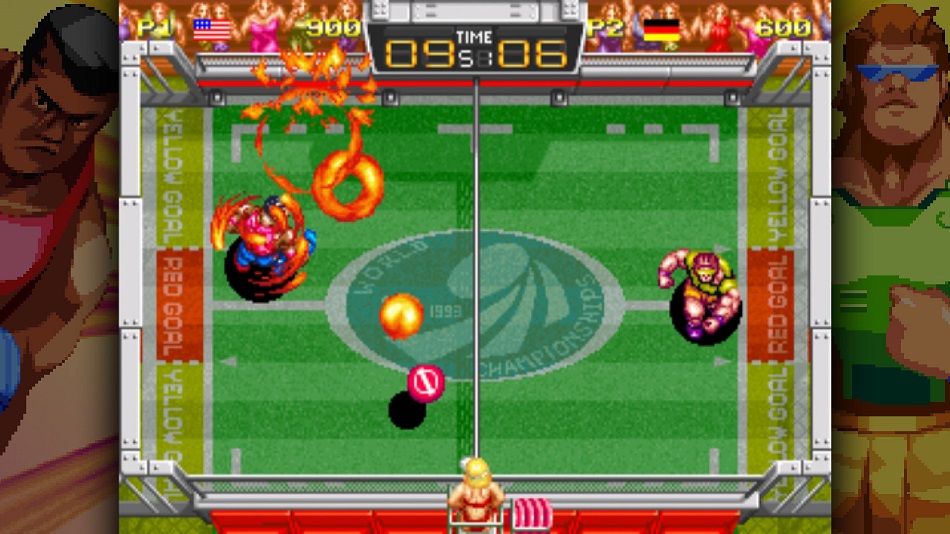 Windjammers features six playable characters ranging from the light and fast Hiromi Mita of Japan to the tank-like German, Klaus Wessel. Larger characters throw the disc harder and faster, but smaller characters are less likely to get blindsided if an opponent hurls the Frisbee into a hard-to-reach corner.

However, even speedy characters like Mita move at a snail’s pace compared to the rocketing discs that Windjammers’ athletes hurl around the court, so mastery of sliding is required to pull off consistent receptions. Slides take some time to recover from (the greater the character’s size, the longer the recovery) so it’s essential to be strategic in making these split-second decisions. Each character also has a different supercharged shot which they can unleash by holding the X button at the correct times. Larger characters have more powerful special moves.

In action— especially on the medium or hard difficulty settings— a long volley in Windjammers is a thing to behold, like a table tennis match at the Olympic games. Playing at a high level requires lightning fast reflexes, and the tide can turn in a matter of seconds. The game rarely felt unfair, however, because I was constantly aware that the play had meaty depth just underneath the surface.

This release of Windjammers, though, is not similarly meaty. There are some cool additions like the option to play with a fuzzy TV filter or the curvature of an arcade cabinet’s bubble screen bending the edges of the court, but the game itself is pretty barebones. The only singleplayer option is an arcade mode which tasks the player with defeating the six playable characters, but there’s no campaign proper.

A few of the maps switch up the basic formula by adding barriers across the middle of the court which jammers can use to achieve interesting bounce and curve shots, and there are two mini-games—one which tasks the player with controlling a dog attempting to catch a Frisbee, another is bowling but with a disc—but neither of these are especially compelling.

In the end, Windjammers is a mechanically interesting experience that still feels fresh 23 years after its release, but this PS4 edition doesn’t include much to enhance the original. As it stands, Windjammers is enjoyable for an afternoon with friends, but it doesn’t offer much to hook players for the long term. Rating: 7 out of 10

Disclosures: This updated version of Windjammers was developed for PS4 and Vita and published by DotEmu. This copy of the game was obtained via publisher and reviewed on the PS4. Approximately 10 hours were devoted to the game between the arcade, local and online multiplayer modes and the game was completed.

Parents: According to the ESRB, this game is rated E with no content descriptors. Nothing to worry about here.

Deaf & Hard of Hearing Gamers: Aside from the characters’ nation-specific barks (like Steve Miller, the British jammer, saying “Good show!” after a set) there is no dialogue in the game, and important audio cues (like the opening whistle) have visual counterparts.