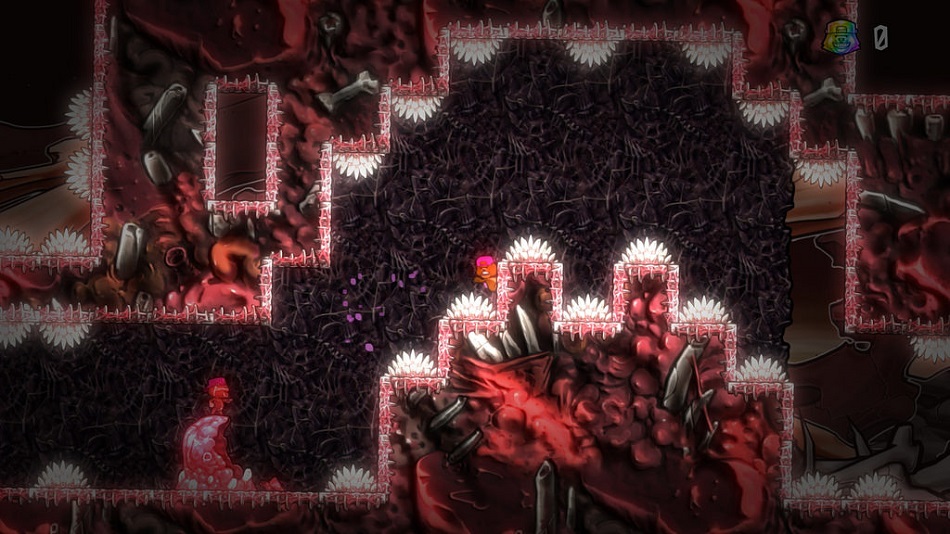 High: The deep breath before (and the sigh of relief after) a seemingly impossible bit of platforming.

How much enjoyment a player will get out of Super Rude Bear Resurrection, a masocore platformer available on PS4, Xbox One and Steam, corresponds pretty directly to their level of tolerance for spikes.

The pointy hazards are everywhere in SRBR. They cover large swaths of the landscape, stick out of walls, and hang down from the ceiling like deadly stalactites. The player, controlling the eponymous backwards-hat-wearing East London teddy, is tasked with navigating these levels with extreme precision. One wrong step and you’re kabobed.

I was kabobed a lot over the course of my eight hours with the game, but this Super Meat Boy-aping sidescroller adds two mechanics that make the difficulty substantially more manageable than that of its spiritual predecessor.

For one, the player can temporarily take control of Rude Bear’s companion—a sarcastic, flying, bearded, blue thing—and hover through the level, making mental notes of the twists and turns that await up ahead.

Secondly, while respawning is par for the course in nearly every game, Resurrection made it into Rude Bear’s title because death here is not just a consequence of failure, it’s a mechanically-integral part of the experience.

Even after he dies, Rude Bear’s corpse sticks around. This acts as a sliding difficulty scale, making challenging sections slightly less challenging with each attempt. A swinging ax can be blunted with a bear corpse on each head. A patch of pikes becomes level ground with a bear cadaver impaled on its points. Dead bears become ursine shields, with the player using the body they recently abandoned to block incoming projectile attacks. 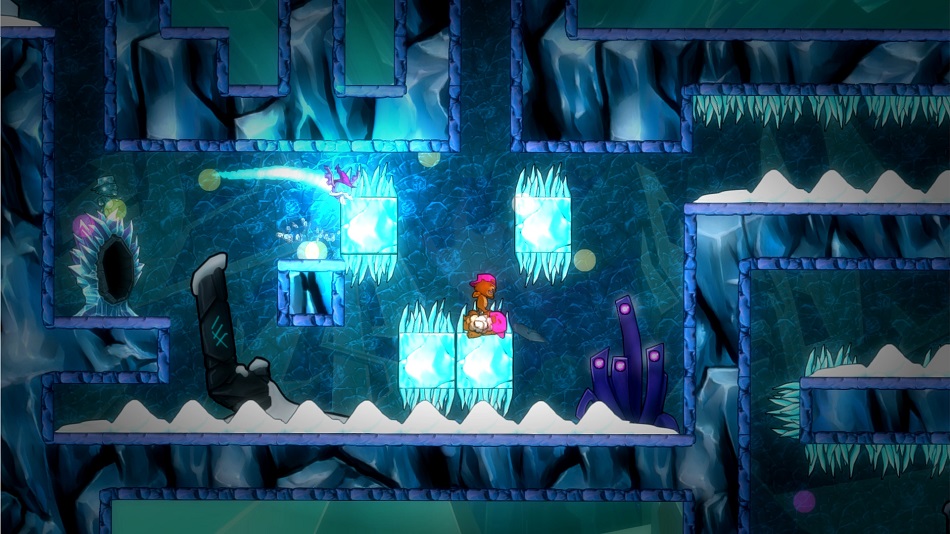 This is a cool idea on paper, and in execution, it’s still pretty cool. But, developer Alex Rose Games doesn’t make the most of this concept — not by a longshot. Rude Bear’s sidekick informs the player early on that they don’t ever have to die— each level can be completed without losing a life. This means that the corpses are never necessary for solving puzzles or advancing the action. Instead, the persistent corpse mechanic functions in much the same way as the corpses themselves. They smooth over some of the game’s rougher edges, but they’re more or less unnecessary.

There is, however, a solid sense of satisfaction that comes from completing a particularly challenging bit of platforming. Checkpoints are fairly placed, and Alex Rose Games intelligently avoids the special kind of frustration that stems from lining too many difficult sections up back-to-back without a save spot.

However, this sense of satisfaction is often undercut by SRBR’s most noteworthy mechanic. On the default difficulty setting, bodies pile up like the last half hour of a Tarantino movie, giving the player more and more advantages every time they die. The feeling of accomplishment upon completion was significantly reduced because I knew that the level got easier each time I messed up.

The appeal of hard games is that they’re hard and navigating one of SRBR’s stages without dying is quite a task, but it doesn’t help that Super Rude Bear Resurrection often feels slippery. Playing with the d-pad instead of the control stick improves the handling some, but even then, I often found myself sliding off platforms and having to bounce back up the sides, sometimes overshooting multiple times before I managed to stick the landing, or, just as often, fall to a spiky death.

This issue isn’t helped by the fact that the camera keeps the player at a healthy distance. “How can you tell it’s a bear?” my dad asked after watching me play for a few minutes. Good question, Dad. While the environments look sharp and colorful, the wide angle view sometimes makes it hard to track Rude Bear in the game’s busy, kinetic stages.

These difficulties aside, the biggest roadblock SRBR put in the path of my progress had nothing to do with game design. Instead, on multiple occasions I loaded the game only to find out that my last several hours of progress had disappeared. My frustration with this was exacerbated by the fact that SRBR doesn’t offer any way to manually save. After it happened the first time, I was extra cautious before signing out and checked to make sure that my files had autosaved before turning off my PS4. They apparently had—the stages I had completed were accessible from the level-select screen—but when I booted the game up later, again, my progress was gone.

Judging by the reviews I’ve read, this apparently hasn’t been a problem for anyone else. But, it was a game-breaking issue for me, and ultimately the reason I chose not to finish it.

Disclosures: This game was developed by Alex Rose and published by Alex Rose Games.  This review code was obtained via publisher and the game is currently available on Steam, PS4 and Xbox One. This game was reviewed on PS4. Approximately, eight hours of play were devoted to the main story, and the game was not completed. Aside from leaderboards, there are no multiplayer modes.

Parents: According to the ESRB, this game is rated Teen and contains Violence, Blood and Gore. It’s important to note, however, that while the game is violent, it’s cartoony and the blood is brightly colored. It’s more upbeat and fun than it is grisly.

Deaf and Hard of Hearing Gamers: All dialogue is text-based. The entirety of the game can be played without sound.

Remappable controls: The controls are not remappable.

Sorry about the same glitch. It wasn’t found in the QA process and as a solo dev I have no QA team, but it was fixed in patch 1.01. Sorry that this hurt your experience.