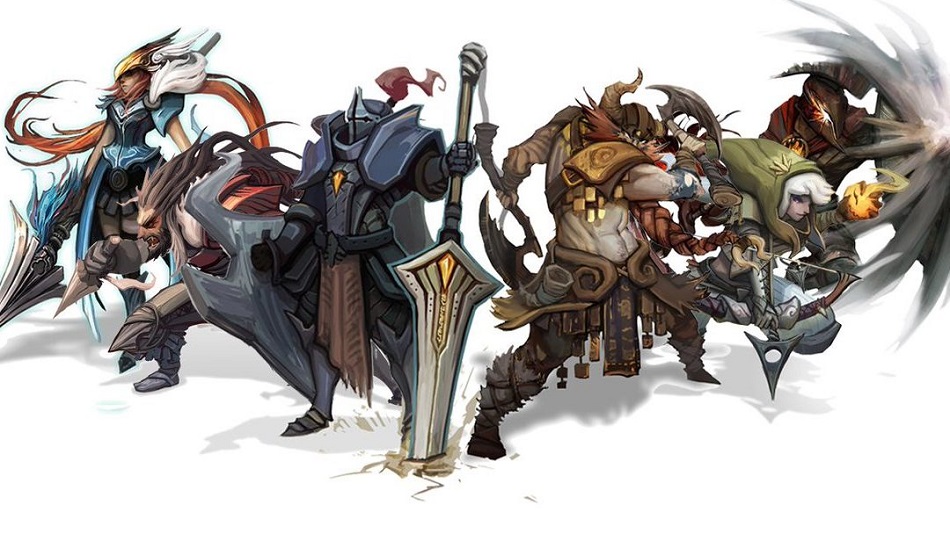 Rip Torn’s grizzled guru from 2004’s Dodgeball infamously told Vince Vaughn’s ragtag team of Average Joes that if they could dodge a wrench, they could dodge a ball. In Strikers Edge, out now on PC and PS4, O’Houlihan’s axiom is put to the test, but this time the projectiles are more dangerous than wrenches. A ninja’s shuriken, a huntress’s arrow and a knight’s lance whizz by constantly as the player maneuvers pixel art avatars around treacherous arenas.

Strikers Edge is simple to understand—it’s top-down dodgeball with medieval RPG set dressing—but tough to master, and after my first two hour play session, my eyes were watering from my attempts to follow the frantic action. Frankly, I felt like I could have used more than the two I was born with.

One set of eyes would be needed to follow the twitchy foe on the opposite side of the tennis court-style arena as they threw projectiles and dodged mine. Another pair could mind my own side of the court, keeping tabs on incoming attacks and special moves. And if I’d had my way, a final set of eyes would be keeping track of the the arena itself. Depending on the stage, icy spikes may fall from above, poison globs can arc up onto the court, or shield-bearing soldiers might bounce straying players back into the action. 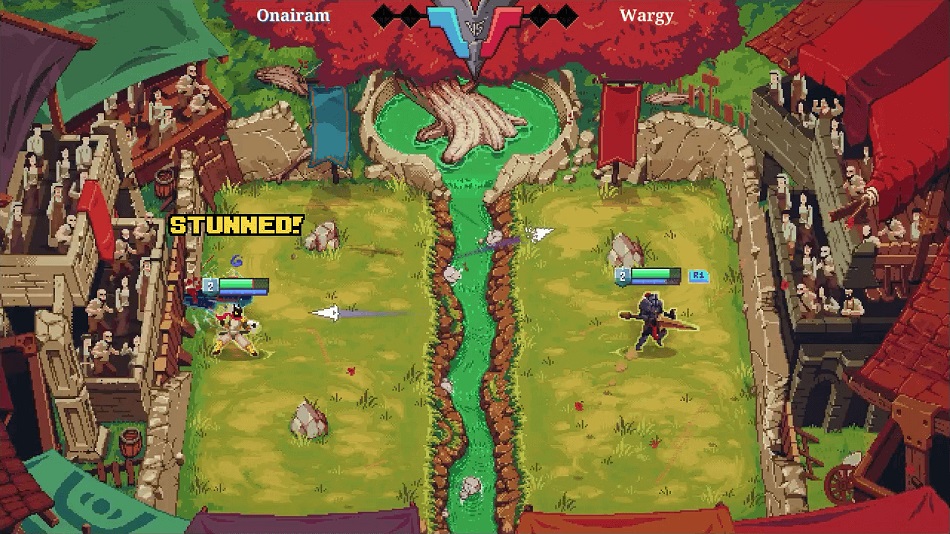 What makes this all so hard to absorb with standard human anatomy? In similar top-down sports titles like Windjammers, the action — while fast and furious — is essentially turn-based. The opponent sends a shot sailing across the player’s bow, and then the player grabs the disc and sends it hurtling back. That moment of possession, however brief, affords the player a split-second to strategize. In Strikers Edge, that moment never comes. The player is both attacker and defender at all times. At its best, the action locks the player in, providing a burst of bleary-eyed adrenaline. At its worst, it feels like too much.

For those who can keep up, the eight single player campaigns on offer are enjoyable, brief and interestingly character-driven. Each begins with a few paragraphs explaining the avatar’s origins and setting up the overarching quest they’ll be pursuing over the next half-hour or so of story. Each match is presented as a narrative-oriented sidequest.

For example, the huntress and zealous defender of Mother Nature, Lael, sees smoke rising from the woods, and sets off to punish the human who dares damage the environment. The player then attempts to serve the death penalty to another warrior for the simple sin of trying to stay warm by a campfire. After completing four increasingly difficult matches, the campaign closes out with a few paragraphs wrapping up the hero’s story. It’s an intriguing framing device, and one that provides a modicum of buy-in beyond the frenetic treadmill of battle.

Local multiplayer lacks the narrative trappings of the campaigns, but serves as a solid extension of the core gameplay. Online multiplayer, however, is where Strikers Edge falters. After several attempts to evaluate it, I was never successfully matched against an opponent. I repeatedly waited in the lobby for long periods of time, with no luck. It’s a niche indie game with a small community, so it’s understandable that matchmaking might have issues. That said, buyer be warned, at this point it seems the only way to play online is to invite a friend who also owns the game.

So, for six-eyed folks in search of a frenetic couch co-op game, look no further.  Strikers Edge is an underdog to root for. The rest of us might be better off renting Dodgeball instead. Rating: 7.5 out of 10

Disclosures: Strikers Edge is developed by Fun Punch Games and published by Playdius and Plug In Digital. It is currently available on PC and PS4. This copy of the game was obtained via publisher and reviewed on PS4. Approximately 7 hours were devoted to the game across single player and local multiplayer and the short, fighting game-style campaign was completed many times.

Parents: Strikers Edge received a T rating from the ESRB for Violence and Blood, and honestly the ESRB is laying it on a little thick with this one. There’s nothing graphic enough in this game’s pixel art fights to warrant anything above an E10+.

Deaf and Hard of Hearing Gamers: All dialogue and story information is delivered solely through text, and important cues in battle (“Impaled!” “Headshot!”) are communicated with large, stylized text as well. It’s fully accessible.

Damn, I want an Xbox One release