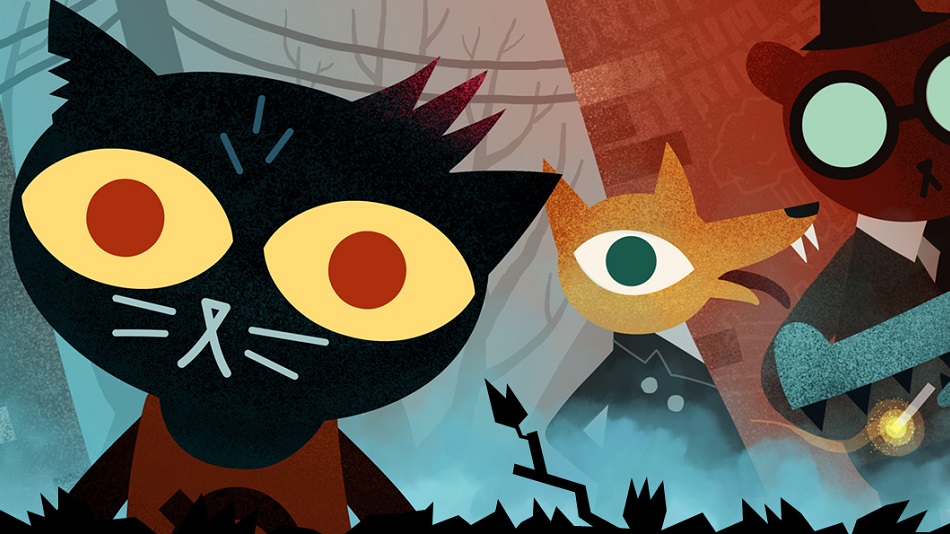 HIGH Possibly the funniest, most poignant writing I’ve seen in a game — and I reviewed Dream Daddy!

LOW The minimal interactivity of the climactic third act.

Night in the Woods, which made its Switch debut this month, is the best Twine game I’ve ever played and the fact that it isn’t actually a Twine game makes it even more impressive. Infinite Fall built the Kickstarted project’s extensive dialogue system in Yarn—an open-source Twine-like engine that they created—and then grafted that branching narrative onto the skeleton of a 2-D platformer.

The player takes on the role of Mae Borowski, a 20-year-old anthropomorphic cat returning home from college after abruptly dropping out. Each day Mae finds Mae running and jumping through Possum Springs, her economically depressed hometown. She tightrope walks along power lines and chats up the locals on her way to meet-ups with her high school friends, Gregg, Bea and Angus.

This port to the Switch is excellent and comprehensive, and includes Longest Night and Lost Constellation, two standalone adventures originally released in the run-up to Night in the Woods‘ launch. The only downside I was able to see when comparing the Switch port to the PC and PS4 versions is that load times are slightly extended, maybe a second or two longer. Otherwise, NitW is an ideal contender for portable play.

The structure—broken up into days, like a story-heavy Stardew Valley—makes it the perfect thing to play before bed. Each morning, players will wake up and mess around in Mae’s room, plucking out rhythm mini-games on Mae’s bass guitar (a showcase for NitW‘s terrific soundtrack), dungeon crawling through a Hyper Light Drifter clone on her laptop, and setting up plans for the afternoon with her friends via IM.

Mae’s days are bookended by interactions with her parents, who are both affectionate and likable characters. In the morning, Mae talks with her mom in the kitchen. At night, she chats with her dad as he watches TV on the couch.

In between all this, Mae travels around, speaking with townspeople on the way. As others have noted, Infinite Falls smartly placed Gregg, Bea and Angus’ workplaces on the opposite side of town, pushing the player to explore Possum Springs and getting to know its residents. 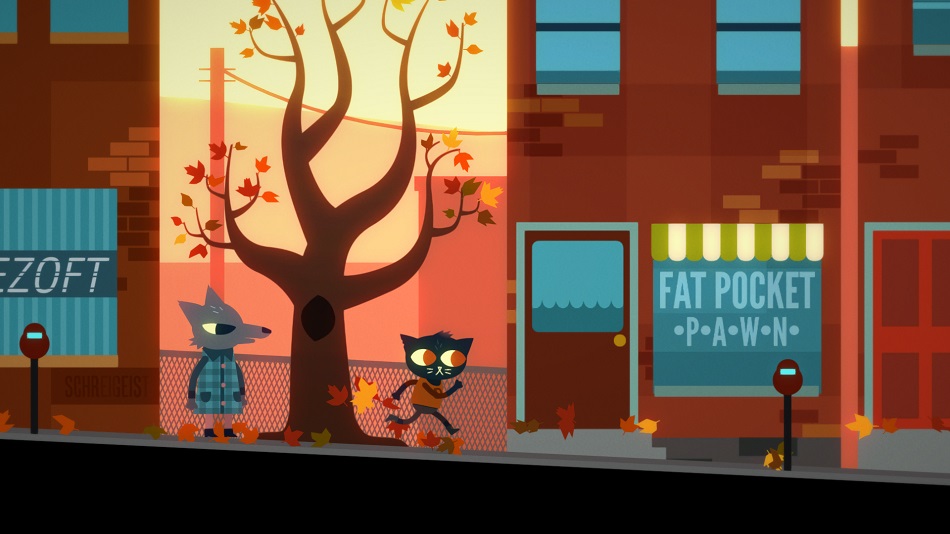 As they take in the sights, players will find shuttered buildings littered throughout the gorgeously animated city. A restaurant Mae loved is closed. The local grocery store has been replaced. Mae’s friends, who have kept their high school band together through the years, hold practices in an abandoned party store. Possum Springs, like boomtowns gone bust across America, is haunted by the specter of its industrial coal-mining past.

The town is populated with well-written characters, each with a narrative arc that the player can only experience in its entirety if they choose to speak with them each day. I religiously sought out Kate, the local pastor. She’s a generous and hardworking woman trying to open up a section of the church as housing for a local homeless man before winter hits. Kate’s storyline deftly explores the nature of faith and doubt, and is a microcosm of what makes NITW work.

Possum Springs serves as the knotty center for a tangle of thematic threads, and each character brings certain themes to the fore — Pastor Kate and Angus, an atheist, give dueling perspectives on religion. Bea, who runs her family’s store and Mae, who treasures her immaturity, represent different points on the journey to adulthood. Gregg’s manic anxiety shows us the difficulty of learning to live with mental health issues.

Night in the Woods is a collection of character studies which give us a portrait of rural America in decline. It has all the depth of a narrative-focused game like Depression Quest or Dear Esther, but places its rich story within the structure of richer gameplay. In fact, the lowest points in Night in the Woods are the moments that it forgets this and forces players into segments that take agency away in favor of larger exposition dumps. The climax, which is, narratively, the most exciting point in the game, is by far the least mechanically interesting as it reduces gameplay to scrolling through text for nearly an hour.

NitW could also do more with its platforming. Five minutes in, the game tutorializes its jumping, and that tutorial is more challenging than any section that follows throughout the rest of its ten hour runtime.

Ultimately, though, those issues do little to detract from the excellent characters and story at the heart of Infinite Fall’s debut. Night in the Woods’ story is the main attraction, and its superb execution was enough to keep me hooked. Rating: 8.5 out of 10

Disclosures: Night in the Woods is developed by Infinite Fall and published by Finji. It is available on Mac, PC, Linux, PS4, Xbox One and Switch. This copy was obtained via publisher and was reviewed on Switch. Approximately 12 hours were devoted to the game, and the main story and all extra content were completed.

Parents: Night in the Woods received an ESRB rating of T for Fantasy Violence, Mild Blood, Sexual Themes, Drug Reference, Language, Crude Humor, Use of Alcohol and Tobacco. None of this is too intense, but the game is dark and deals with mental health issues. Young ones might be attracted to the visual style, but it’s aimed squarely at older players.

Deaf & Hard of Hearing Gamers: All dialogue is communicated solely through text, so nothing important should be missed. A recurring section tasks the player with finding four musicians and the soundtrack builds as each musician is discovered, but this is signposted pretty well visually, however, and shouldn’t pose a problem. It’s fully accessible.