Call Of The Wilds 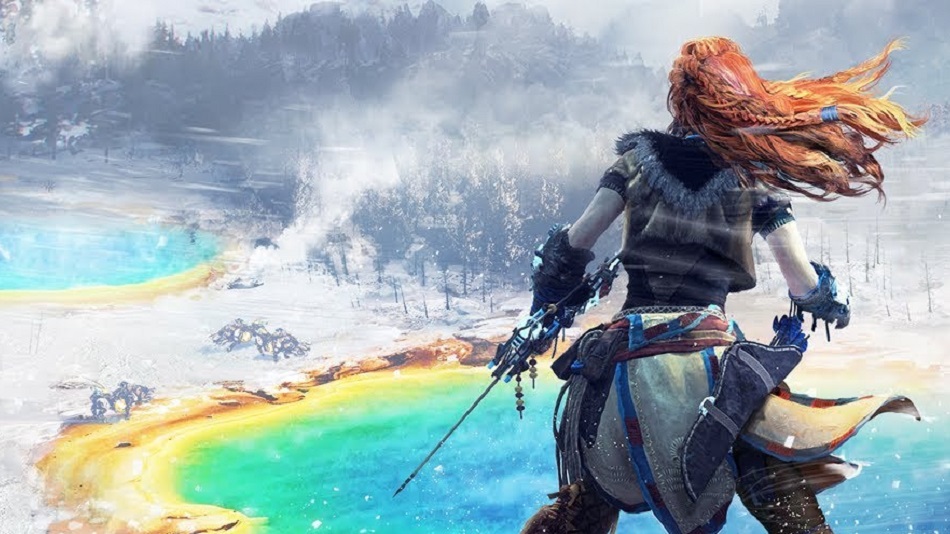 From the moment I navigated to The Frozen Wilds’ first blue exclamation point quest marker, it was clear that developer Guerilla Games had used every hour since the original release to sharpen the experience to a fine point, trimming away everything unnecessary and making significant quality-of-life improvements.

As the quest-giver told me of strange happenings in the unvisited Banuk territory to the north, he emoted like a real person. The base game NPCs had a tendency to cycle through the same three or four facial animations as the camera provided static shots of their head and shoulders – an Uncanny Valley habit that often undercut the impact of what they were trying to convey. Not so here.

The direction of the new cinematics have been revamped to more closely resemble Zero Dawn’s high-fidelity cutscenes. Characters move around, talk with their hands, and in general feel less like Disneyland animatronics. This may seem like a small improvement, but it’s representative of the approach that Guerilla is taking this time around, and it filled me with goodwill as I headed into the wilds.

While the core campaign began with a five-hour stretch of Uncharted-style cinematic storytelling, much of that momentum was lost when the focus broadened to give the player freedom to explore. The Frozen Wilds, however, benefits from its narrower scope and shorter run time. This time around, Guerilla gets to have its cake and eat it too: Wilds provides an impactful, narrative-driven quest punctuated by excellent and varied activities to engage in throughout a scaled-down open world. 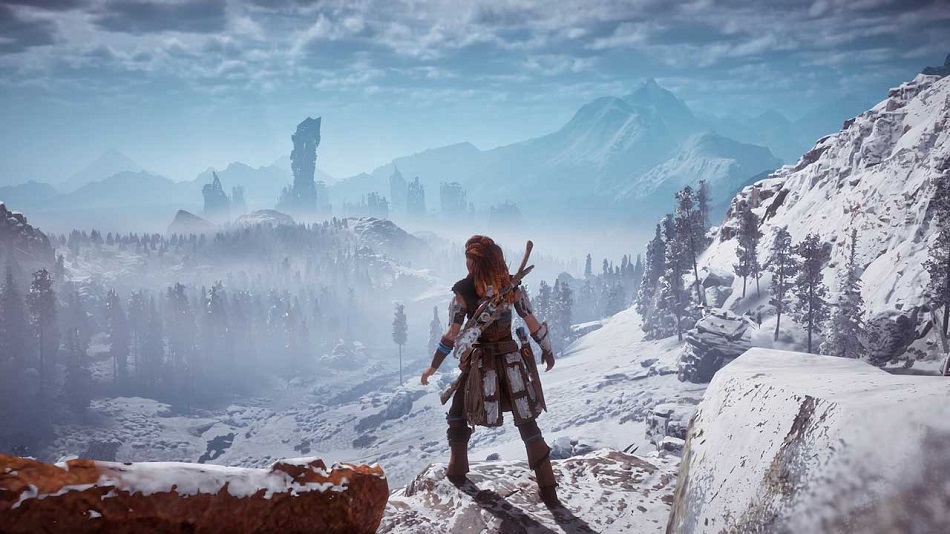 Given the diversity of Horizon’s biomes, I was less than thrilled when I first discovered that the DLC would find Aloy traveling to The Frozen Wilds. There’s already plenty of snow at the start of the base game, so centering the expansion on more of the same seemed like a mistake, especially given how little the game explored the more interesting jungles to the south. However, almost as soon as I entered the Banuk territory, I realized how wrong I had been.

I’ve lived in Michigan my entire life, and as a midwesterner I’m familiar with the dynamics of dealing with snow. Wilds gets this too — more than any other area in the game, the Banuk territory evokes a sense of place. Aloy walks more slowly and bowlegged through deep snowdrifts. In areas where the snow is packed tightly to the ground, her footsteps are satisfyingly crunchy. Occasionally, heavy snowfall makes it believably tricky to see.

An excellent soundtrack complements the visual design in establishing this feeling of there-ness. One piece in particular combines low, burbling synth with flute flourishes, a pairing that manages to encapsulate the strangeness of Horizon’s mysteriously futuristic, yet beautifully primitive world.

Wilds does a good job of making small tweaks to the Horizon experience, while leaving the core gameplay basically unchanged. Hunting animals is still a necessary part of Wilds’ crafting mechanic, but this time white goats and gray badgers that blend in with the snow-covered hills have been added to the doomed menagerie. As before, Aloy is tasked with overriding a Tallneck (the robotic dinosaur equivalent of an Ubisoft tower) but here, she first must hunt down the parts to repair it. Wilds offers up a new bandit camp for Aloy to stealthily infiltrate, but this time the bandits have a scanning device capable of pinpointing her location — a wrinkle that shakes up the hide-and-hit formula I had memorized over dozens of hours before.

Probably most significantly, Wilds introduces some devastatingly powerful new machines and, at times, eschews the traditionally stealth-heavy level design. Some late-game battles are especially short on tall grass for Aloy to hide in, requiring the player to either go in loud or climb to elevated hiding spots on rocky outcroppings above the fray.

The recommended level to start the expansion is 30, and players can expect to be around level 50 to finish it. As such, Wilds serves as a masterclass in Horizon’s combat, and tricky enemy encounters pushed me to try new approaches. 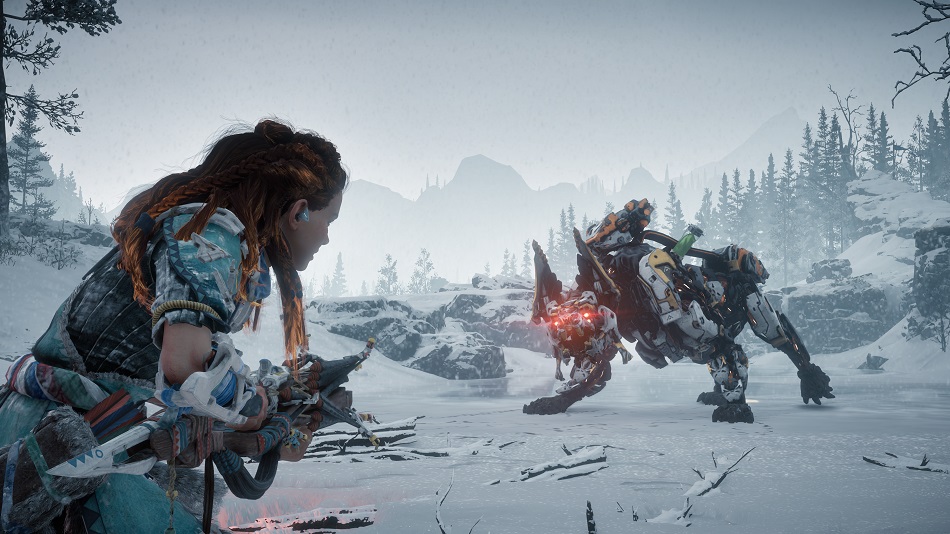 For example, late-game fights against the powerful ursine Fireclaws were so challenging that, for the first time, I began to experiment with using overridden machines to assist me in battle. Sending in a pair of the massive ram-like Tramplers to help was a sight to behold — a high-spectacle, systems-driven alternate take on the Pokemon battle.

Wilds also throws in several new elementally-charged weapons (and a questline devoted to upgrading them) that give the player more powerful options. The first time I charged up the Improved Icerail (an icicle-spitting harpoon gun) and shot it at a Fire Bellowback’s tank-like weak spot, the spot exploded and knocked off half the massive machine’s health. It was a genuine, jaw-on-the-floor, “Holy Crap!” moment.

Interestingly, Wilds provides the first opportunity to see Guerrilla respond to the advances in open world design made by its biggest 2017 competitor, The Legend of Zelda: Breath of the Wild.

BOTW made excellent use of ‘weenies’ – i.e., locations on its map that are visible from a long way off which serve to stoke curiosity and encourage exploration. For Zelda, the most obvious example was Hyrule Castle, which could be seen from nearly every location on the map. Until now Horizon was lacking in this category, but Wilds is savvy in its correction of that misstep. The story here is centered on Thunder’s Drum, a smoke-billowing mountain inhabited by a malevolent AI force that is infecting the machines, making them more violent. The location is introduced in early story beats, and from the jump, it’s clear that eventually Wilds’ story will culminate with Aloy ascending that mountain.

There’s plenty to do in the meantime, however, and plenty of bite-sized stories to enjoy en route to the main course. This expansion’s side quests are excellent with each offering compelling characters, believable arcs and emotional climaxes. Sometimes completing the quests pays off in ways that show up in the world. One particularly memorable storyline introduces a soft-spoken, pipe-banging musician named Laulai whose subterranean home was mysteriously flooded, who tasks Aloy with finding the source of the water. Later, when I had drained the water and Laulai had taken up her instrument again, I could hear the melodic banging of pipes as I ran over the spot.

As much as I loved all the activities that Wilds provided on the side, Thunder’s Drum continued to call my name. Centering the world around the mountain provides compelling motivation to keep pushing through the main quest. I was equal parts interested in advancing the central storyline and in exploring all the side content that Wilds had to offer. That’s a rare, and joyful, feat for an open world game to achieve. Wilds pulls it off. Rating: 9 out of 10

Disclosures: The game is developed by Guerilla Games and published by Sony Interactive Entertainment America. It is available on PS4. This copy of the game was obtained via publisher. Approximately 25 hours were devoted to the main story and side quests, and the game was completed. There are no multiplayer modes available.

Parents: According to the ESRB, this game is rated T for Blood, Mild Language, Mild Sexual Themes, Violence and Alcohol and Tobacco References. Violence should be the only real worry for parents. Aloy’s bouts with machines can get pretty hairy and could be frightening to younger gamers, and I headshotted dozens of humans during my time with the game. Everything else is incredibly mild.

Deaf & Hard of Hearing Gamers: All dialogue is subtitled and stealth sections are aided by visual cues.

Remappable Controls: Aside from inverting the X- and Y-axes, the controls are not remappable.