The First Time With An Old Favorite 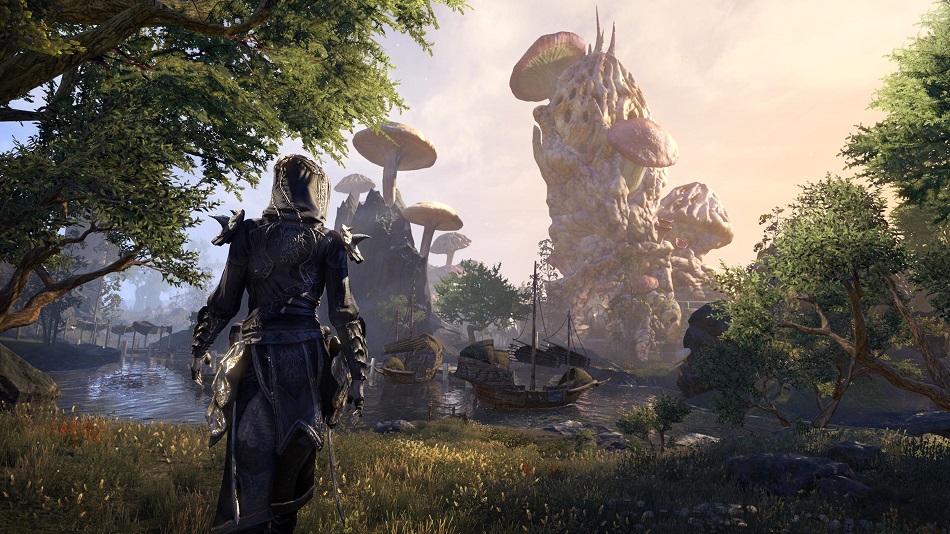 High Some of the best sidequests I’ve experienced in an open-world setting.

Low Waiting in a queue for 10 minutes only to not get placed in a PvP match.

WTF Seriously, am I the only one this isn’t working for?

The main theme of The Elder Scrolls III: Morrowind’s soundtrack, “Nerevar Rising” has been remade for its return in The Elder Scrolls Online: Morrowind—out now on PS4, Xbox One and PC. The plinking lyre of the original is still there, but everything around it has changed in favor of the epic. A chorus chants in one of Tamriel’s languages as violins that would sound right at home among the Riders of Rohan gallop along the surface of the score, driven by martial drums.

This is Morrowind—essentially as it was when it debuted in 2002—but recontextualized in the midst of something much, much bigger. Or so they tell me.

My ideas of what the original Morrowind experience was (or wasn’t) are secondhand because TESO: Morrowind represents more firsts for me than I, as someone who writes about games, care to admit. This was my first trip to Morrowind, but more embarrassingly, my first trip to Tamriel, period. I never played Oblivion, and Skyrim came out at a time in my life when I was, for the most part, taking a break from games, although I do plan on picking it up for Switch when it’s released later this year—tackling one of most critically acclaimed games of all time while cosplaying as Link? Why not?

Most significantly, TESO is my first MMO. I’ve never owned a gaming PC so, until Destiny jumpstarted the migration of MMOs to consoles, one of the medium’s most populous genres was inaccessible to me. In context of all these factors, I can say that as an introduction to MMOs, TESO: Morrowind is serviceable. As an introduction to The Elder Scrolls, it excels. 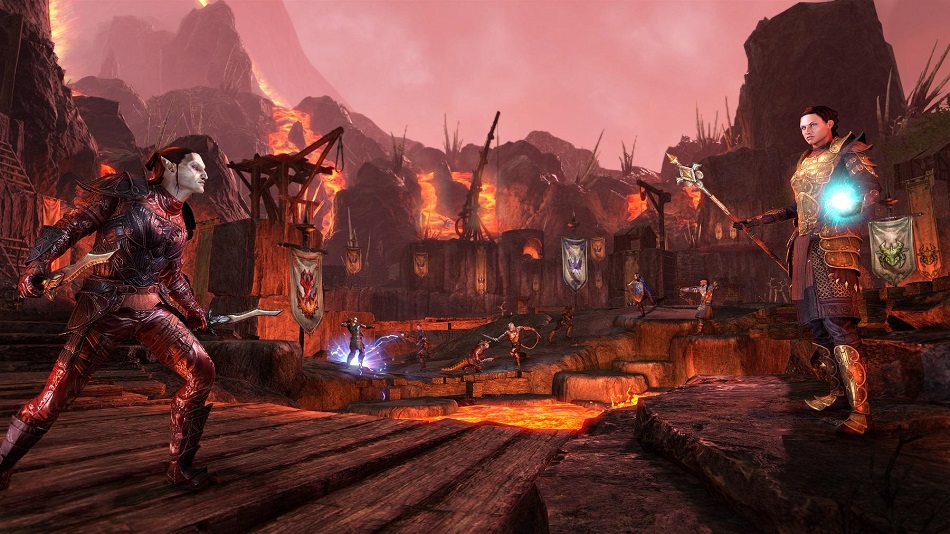 After a lackluster—and, thankfully, brief—tutorial section, the expansion proper begins with the player’s character arriving in the small coastal village of Seyda Neen. The main quest gets underway as the player travels a few miles down the coast to Vivec City, where they’re introduced to the city’s benefactor, Lord Vivec, who is a member of the Tribunal— the trio of gods that rule over Vvardenfell.

For a god, Vivec is remarkably present, ruling over the city and hearing complaints from his citizens like a good king, glowing all the while. He’s also existentially necessary—not in a religious sense, but in an immediate, physical way. Vivec once saved the his people from a meteor striking the city, and, through his divine power, prevents the hulking rock from reaching its destination, forever suspended in air as a constant reminder of his glory. So, when someone suddenly and mysteriously begins to sap Vivec’s power, his weakening poses a Majora’s Mask-style threat to the city. The player is tasked with finding the culprit and restoring Vivec’s power before he becomes too weak to prevent the apocalyptic obliteration.

However, this threat isn’t backed up with the mechanical conceit that made the threat of Majora’s moon so anxiety-inducing. There’s no clock counting down, so players can mess around with sidequests all they want because that hunk of space rock isn’t getting one inch lower. And really, thank God for that, because the main quest is interesting enough, but the side quests are where TESO: Morrowind shines.

Early on into my time with the game, I traveled to Balmora, Vvardenfell’s city of Venetian canals, and found a side quest centered on an aging father’s desire to reconnect with his children after a lifetime of slavish devotion to his work. I was immediately invested, and the quest kept me hooked across its short 45-minute runtime. It’s poignant, and its ending was satisfying in its refusal to give the player neat resolution, and my time with TESO: Morrowind was marked by many similar experiences. A masked vigilante fighting an unjust prison system in Suran, an ambitious slave girl in Sadrith Mora attempting to free herself and her lover… Even when the quests in Morrowind are fetch quests, a compelling piece of narrative is typically what’s being fetched.

The amount of care that has clearly gone into every line of dialogue, every bit of lore, and every sidequest’s plot is staggering. Moments of genuine surprise and melancholy are tucked away in quests that many players will never experience. 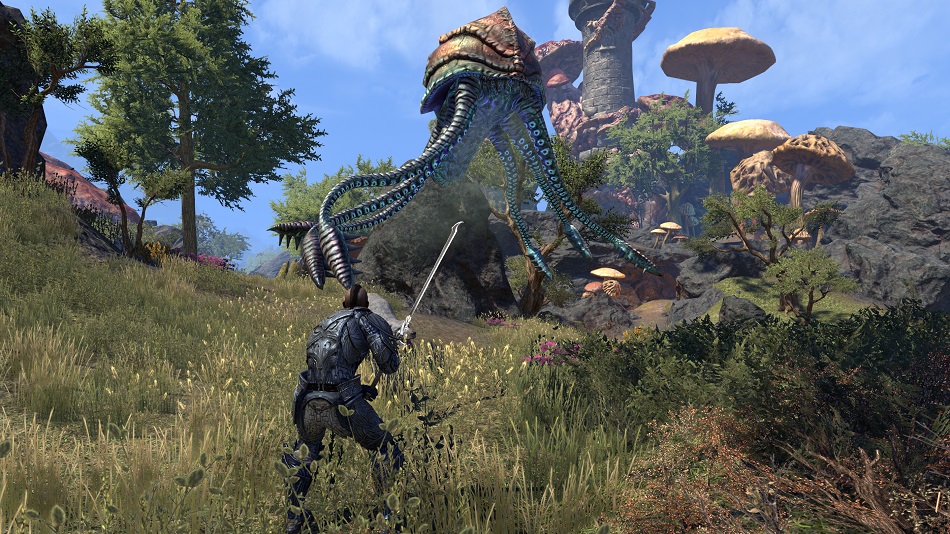 While TESO boasts outstanding narrative accomplishments, its footing is less sure when it allows the player to get physical with its world. The combat isn’t horrible — aside from a few moments when the game failed to register that I was attacking an enemy and left me swinging away at an impervious foe, it generally feels fine. Figuring out the many skill lines and equipping attacks in powerful combinations can even feel good. I even had a moment of genuine excitement when I discovered a melee attack that simultaneously restored my HP while dealing fire damage to my opponent.

Outside of combat, however, the game suffers from a lack of physicality because attacking enemies is the only real interaction the player can have with the world around them. Barrels can’t be broken, walls can’t be scaled and ladders can’t even be climbed unless the ladder is integral to the story. With nine playable races, five classes and dozens of skills to pursue, ESO theoretically wants the player to tackle the world however they see fit. TESO rarely backs this up in its mechanics, though.

While I wish that TESO had more of the “go anywhere, climb anything” spirit of Breath of the Wild, my major issues began when I started to test the competitive multiplayer. TESO: Morrowind introduces a new PvP mode called Battlegrounds which finds groups of four facing off in one of three different kinds of matches: Team Deathmatch, Domination and Capture the Flag. These looked solid and I was psyched to play them, but, even after waiting in queues for half an hour multiple times, the game stubbornly refused to place me in a match, and ditto when using the Dungeon Finder feature. This is one of the biggest additions that Morrowind makes to the TESO world, but unfortunately for this player, Battlegrounds remains an unknown quantity.

I ran into similar issues when attempting the expansion’s dungeons and raid. Maybe I’m just green, what with this being my first MMO and all, but TESO’s Activity Finder never worked for me. I, along with my one real world friend with an ESO account, were left struggling through dungeons alone. That said, I like playing TESO: Morrowind as a singleplayer joint anyway. I enjoy sinking hours into side quests, exploring the map and marveling at the size of the world. I plan to keep playing, and hopefully, at some point, I can get the connectivity issues worked out and get in on the raid.

“Nerevar Rising,” the main theme from the original Morrowind has not only been remade for its inclusion in TESO: Morrowind; it’s been renamed. Now, its title serves as a descriptor for its world: “A Land of War and Poetry.” The Elder Scrolls Online: Morrowind excels in its poetic moments — its dialogue is beautifully written, its quests are labyrinthine. But, it falters in its moments of war, and often leaves the player swinging their swords at impervious foes, wondering if they’re making any difference at all. Rating: 8 out of 10

Disclosures: This game was developed by Zenimax Online Studios and published by Bethesda Softworks. It’s currently available on PS4, Xbox One and PC. This copy was obtained via publisher and reviewed on PS4. Approximately 30 hours were devoted to the game, and the main quest was completed, but—being an MMO— the entire game was not.

Parents: According to the ESRB, this game is rated M for Blood and Gore, Sexual Themes, Use of Alcohol, and Violence. Nothing that I encountered during my 30-ish hours with the game seemed to warrant the M — the violence isn’t especially bloody and I didn’t encounter any sexually explicit situations. However, Tamriel is a very big world. I haven’t seen everything that’s lurking out there.

Deaf and Hard of Hearing Gamers: Characters frequently talk to each other outside the structure of interactive conversations, and, on the default setting, there are no visual cues to alert the player that this dialogue is occurring. Once subtitles are turned on, the game is fully accessible.