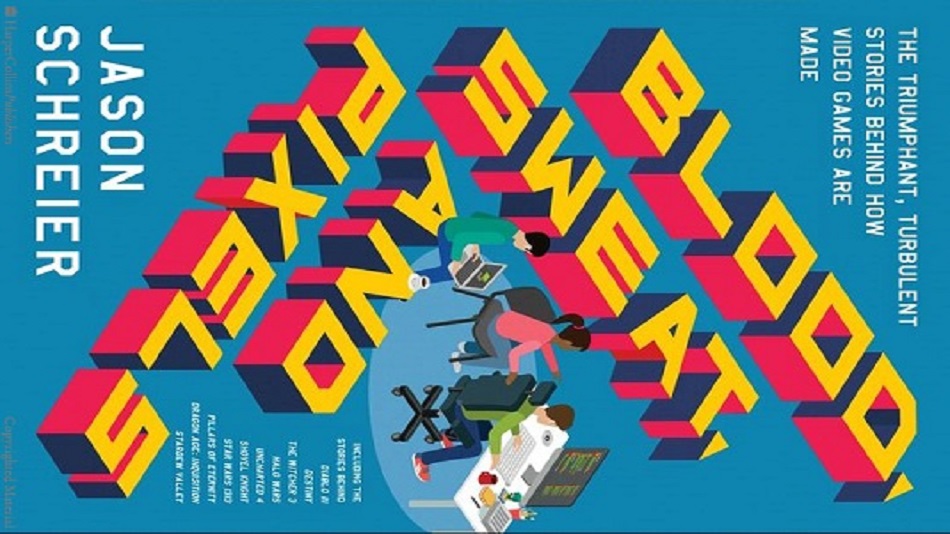 LOW After four or five chapters, the stories begin to blur together.

WTF Ensemble worked hundred-hour weeks for nearly a year during the development of Age of Empires.

My mouth gaped as I read the story of Eric Barone, the one-man army behind last year’s indie smash, Stardew Valley, whose girlfriend supported him for five years as he handcrafted every aspect of the game.

I cringed as Obsidian’s high-level staff members recounted the massive layoffs that accompanied the cancellation of their planned fantasy RPG Stormlands, a bloodbath which the game’s director, Josh Sawyer (who survived the layoffs) called “probably the worst day of [his] career.”

My mind boggled that Dragon Age: Inquisition, a game that was developed in the nascent and, at times, barely functional Frostbite engine, even came out, nevermind that it won armloads of Game of the Year awards.

And, most importantly, my horizon expanded.

Blood, Sweat, and Pixels is the instruction manual to the game industry I never realized I needed. The words that had heretofore been floating around my brain with half-formed definitions—words like engine, parallax scrolling, vertical slice—came into sharp focus in Pixels’ pages.

Schreier’s writing is incisive. As he tells the stories of the development of Diablo III, Destiny, The Witcher 3, Halo Wars, Uncharted 4, Shovel Knight, Pillars of Eternity, Dragon Age: Inquisition and the cancelled Star Wars 1313, Schreier sets vivid scenes in as few words as possible. Pixels is also, to borrow a word that the author helpfully defines in the book, polished.

A quote from Jakub Szamalek, a novelist and writer for The Witcher 3 (the subject of BS&P‘s penultimate chapter) inadvertently provides a succinct summary of what I imagine Schreier’s writing and revision process looked like.

“I don’t think there was a single quest in The Witcher 3 which was written once, accepted, and then recorded,” said Szamalek. “Everything was rewritten dozens of times.” I suspect the same can be said of this text.

At his day job Schreier is prolific, consistently breaking stories with industry-wide impact. But with this book, Schreier had an opportunity that a beat reporter’s life rarely affords — the possibility to write and rewrite, over and over until the words are as close to perfect as possible. What results is a book that is an addictive pleasure to read from minute-to-minute, while remaining as vital and necessary as Schreier’s frequent scoops at Kotaku.

And yet, as I hungrily turned the pages, I realized that my experience with Pixels yielded diminishing returns in its final third. This wasn’t because Schreier slacked off in the last chapters—his prose never stopped being sterling. But, there are only so many ways to tell the same story, and each chapter has a pattern that becomes recognizable as the book wears on — something Schreier has discussed with his cohost Kirk Hamilton on their podcast Kotaku Splitscreen.

Most of the games followed a similar arc — elation as the project began, fear that there was too much work to do in too little time with an insufficient budget, figuring out that the project wasn’t what the devs thought it was at all, devs steering into a new idea, crunching until the game was done and then exhaustion as overworked game makers launched their project.

Blood, Sweat, and Pixels recalls the best of open world design, and also the aspects that tire me out just thinking of them. There are only so many times one can raid a bandit camp, climb a tower or fetch a McGuffin before it all begins to lose its charm. This book is necessary, but as its readers near its end, I suspect that many of them will realize that the fun has been replaced by the grind. Rating: 8 out of 10

Disclosures: This book was developed by Jason Schreier and published by Harper Paperbacks. This copy of the book was obtained via retail purchase. Physical, audiobook and e-book versions are available. Blood, Sweat, and Pixels is 320 pages. The book was completed.

Parents: I would give Blood, Sweat and Pixels a Teen. There’s some mature language, but the subject matter is restricted pretty exclusively to game development and, as a result, is fairly tame.