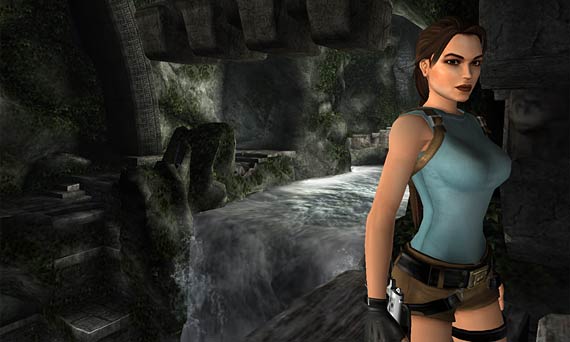 If you're wondering what the point of remaking reasonably modern videogames is, perhaps you should fire up your old copy of Tomb Raider. Time is never going to be kind to Lara's first 3D platform adventure; once a cutting edge showcase for cinematic gaming, now muddied under the scrutiny of our HD-attuned gaze, mundane next to the ‘anything goes' policy of post-GTA action titles, and stiff compared to the liberating analogue movement we now take for granted. Eidos clearly wanted their golden girl's most famous outing preserved for the ages, and to make a few nostalgia sales in the process of course. But does Tomb Raider have any relevance in 2007?

I should probably state right now that I actually loved the brutal precision of the original. For all its popular appeal, Tomb Raider was a geekily strict platform game, but one unmatched (arguably to this day) in making your conquests over the land feel real. When you climbed to a great peak using just your hands and the rock around you, you really felt the achievement, the human achievement. Mario offered carefree, balletic fantasy; Lara, with her bone-breaking falls and audible strains of upper-body anguish, kept it very real. But following in the revisionist footsteps of last year's Tomb Raider Legend, Anniversary is a more approachable game. Ironically, just as the first outing felt like a 3D Prince Of Persia, this remake echoes much of the fluidity and leniency of 2003's Prince Of Persia: Sands Of Time.

Although while Lara and her levels flow with a little more grace and speed this time, there's enough danger inherent in the environment and trap designs to keep you on your toes. The frequent checkpoints and new recovery move (to hold on after a fingertip ledge-grab or poorly-judged jump) are both very welcome additions. Less ingratiating are the blind or uncertain jumps that arise due to the occasionally deficient camerawork. 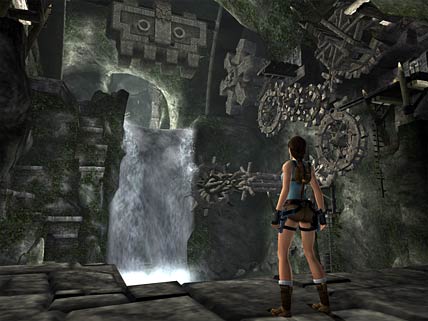 And that's typical of a game whose terrifically intricate and epic platform puzzles are often bitterly bookmarked with moments of intense frustration: injury throe animations that push you off platforms, occasional control let-downs (usually camera induced), some invisible time limits, and several occasions where you'll be trying to kill Lara because it's the quickest way to get back to your pre-screw-up position.

Other last-gen hangovers fare better: the dreaded flying dart traps in particular benefit from the new graphical clarity, and the original's dicey combat is a little bit fairer than before, with a neat slow-motion super shot ability lessening the temptation to just stand on a nearby ledge and blast away with impunity. For entertainment's sake, I think it'd be churlish to bemoan the loss of ‘purity' here.

Likewise, the grappling hook from Legend successfully adds some funky gadgetry, stunt work and physics-based effects into the mix without diluting the core formula or, as the game progresses at least, feeling too tacked on. It also puts a +1 on the platforming variables, allowing for still more elaborate jumping puzzles. 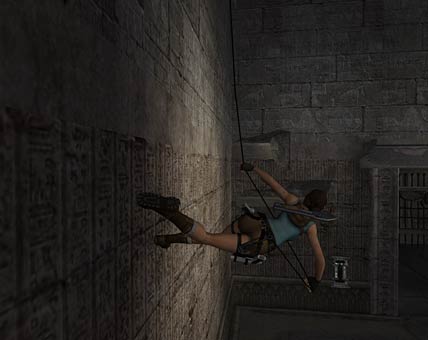 But what a shame that the worst moments still come from those infamous swimming sections. Refusing to learn from an apparently obvious problem with the previous games, Lara can still only seem to hold her breath for exactly long enough to get from one water surface to another, if swimming flawlessly and at full pelt. Combined with the new murkiness of Lara's underwater surroundings, and the fact that you rarely know what you're looking for or where you're supposed to be going, underwater exploration becomes a frustrating and deeply unpleasureable experience. Realism? Whatever. I'd have preferred a skippable cut-scene of Lara swimming to this nonsense.

So, does Anniversary have anything to teach us 10 (whoops, 11) years later? Well, the restraint taken in updating this fairly simplistic and modestly paced game shows just how bloated and bombastic many blockbusters of today are. It displays a kind of reversed law of diminishing returns, building a compelling adventure with minimal gameplay clutter in a way that is just as refreshing and worth championing as it was in kindred spirit ICO five years ago. Even the original's exquisitely sparse soundtrack, which to my mind was always one of the most memorable and effective in gaming history, is treated with a surprising degree of respect. How many games nowadays remain practically silent for about 95% of their duration?

The gaming joys of discovery, surprise and progress are distilled so well in these 14 levels that it almost makes a mockery of games relying on character upgrades, item collection and other teases to emulate those concepts, yet even the most lauded game series are often slaves to such conventions. And Tomb Raider's simple rule- and move-sets make many supposedly cutting edge adventure games look artificial, needlessly complex, and confused about how to best engage their player. There's a clarity of purpose at work here of the sort found in other gold-standard game designs, from Pac-Man to Super Mario Bros. to Half-Life; games that, from the evidence in Anniversary, Tomb Raider probably deserves to share the same podium as. Albeit dangling from the edge by its fingertips…

Disclaimer: This review is based on the PlayStation2 version of the game. The enhanced Wii version is expected to ship November 2007.

In a move that will surprise no-one, I heartily applaud your decision to not score this game. It was especially appropriate here to not reduce your discussion of the game to a single number.

I know what you mean Hargrada. I rolled my eyes, stretched my legs, and probably even made a few cups of tea during those cut-scenes. 🙂 But the original’s narrative setup was always just a cheesy excuse for raiding some attractive tombs, so I didn’t really care that the cheese had matured over the years, so-to-speak. (Was that uzi-wielding GTA extra in the original?) But as I mentioned in the consumer guide, I thought it was a pleasant and fairly brave move to have Lara confront her own killer instinct and obsession with the scion. Hardly a ‘Watchmen’-deep deconstruction of… Read more »

What are your thoughts on some of the character changes in the game? Lara is now obsessed with attaining the scion by any means necessary, and Natla is a much more classically evil villian with sharper, more alien features(I rolled my eyes at her “join the darkside” speech).

Yeah I didn’t feel like giving this one a score.

Yes child, Tomb Raider Anniversary is going to be released in 4 episodic parts over Xbox Live (600 points each) in the next month or two. But you will need an Xbox360 copy of Tomb Raider: Legend to play these I’m told.

A standalone verion of the game for 360 is also planned for “later in the year”.

Where is the score? Is isn’t after the review like normal.