According to ESRB, this game contains: Violence, Mild Suggestive Themes 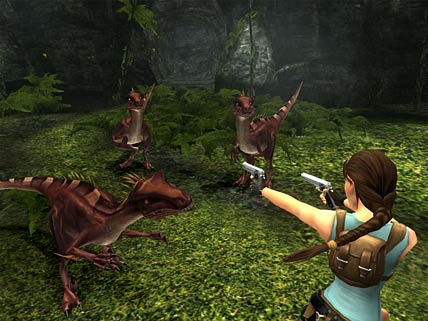 Parents should note that Lara's otherwise wholesome tomb raiding adventure is just as unexpectedly brutal as its Indiana Jones movie inspiration. The ESRB rating and content warning is spot-on. The violence is not bloody, but it is there, and there is too a kind of creepy prurience about the cut-scenes that Lara shares with male characters. Also, in one of the more interesting tweaks to the original story, Lara will later on confront her own killer instinct in some surprising and moderately unsettling cinematics.

For a 2007 release, Tomb Raider Anniversary contains more imminent death than many modern adventure gamers will be used to. But as they say, death is a part of life; a reasonable tolerance for trial-and-error is not asking the world, and gamers who played the original will find this edition notably more user-friendly and forgiving. This newly slick approach to gameflow is reflected in the impressive scale and graphical sheen of the environments, whose variety is a real blessing for a game that could easily have looked and felt repetitive.

For Deaf and Hard of Hearing gamers, there are subtitles for both character dialogue and the great developer commentary dotted throughout the levels. However, they are not color-coded or even titled with the name of the character speaking, which seems silly given the efforts made to expand the narrative detail through what little script there is. Elsewhere, audio is used to signify the time limits of certain retracting platforms and the like, but, while irksome, this is not an insurmountable problem that would halt progress for hard of hearing players.