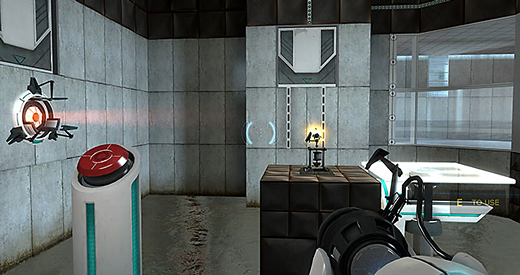 Shoot two portals onto a flat surface and walk through one to appear out the other. This reasonably straightforward game premise is destined to go down alongside "form horizontal lines to make blocks disappear" and "avoid missing ball for high score" as one of the most deviously, deceptively simple in the medium's history.

But unlike Tetris and Pong, where the simplicity of the game rules ensured instant mastery, Portal's richest puzzling gameplay only really begins at those brick wall, progression-stopper moments where most other games grind to a halt, which is itself a bit of a perspective paradox. A shame, then, that those moments only begin to appear about three quarters of the way through the game's 19 training tests. But there is plenty to admire before you get there.

Although a science testing facility is hardly the most imaginative setting for a game like Portal, the drab labs and white-tiled walls of Aperture Science belie an engaging and entertaining atmosphere, ensured primarily by the robotic female narrator, GLaDOS, who guides you through the tests. Through her hopeless attempts to inject humour and humanity into the testing despite her dense corporate-speak and exaggeratedly broken photo-booth voice, the show-stealing GLaDOS (already achieving a notoriety that threatens to overshadow the portal mechanic) ironically does succeed in injecting humour and humanity into Portal. Skilfully appropriating the "robot with logical emotions" archetype, she soon becomes the deadpan conduit for just about any kind of humour Valve wish to throw into the mix, be it a boorish reference to organ donation, a sly gaming euphemism ("unstationary scaffold" gets my vote) or a totally incongruous Smash TV sample.

The tests themselves are for the most part of the satisfying and smart, but not very challenging mould. There are even instructions prior to each test giving the player a pretty good idea of what lies ahead and how it ought to be tackled (although once you know this they're pretty easy to ignore). Tests are designed as much with visual flair in mind as puzzle ingenuity, but it's a symbiotic relationship for the most part; when you find yourself falling into the floor and launching out of the wall across a chasm, the fun factor is hard to dispel just because the puzzle solution was a little too quick in coming. 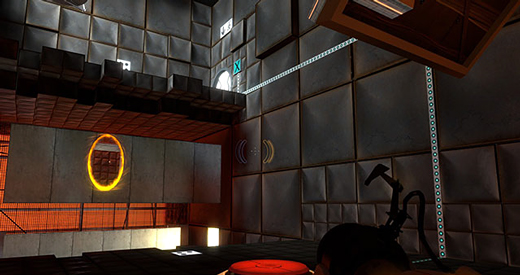 But the remarkable extended coda demonstrates the possibilities of the portal gun in a more traditional Half-Life level design, and redeems the game's underwhelming length and difficulty with a fascinating glimpse of what could be. Not only does it show just how completely the player has adopted the portal logic from the training sections, but it's a fluid, narrativized final level that, as one may have expected with hindsight, exploits Valve's design prowess much better than the lab tests. And it all winds up with a memorable, funny and oddly touching resolution that manages to achieve satisfying narrative closure in a game with the most threadbare of narratives.

Flaws? Well for starters it breaks the first rule of first-person platform gameplay (that is, "For the love of God do not try first-person platform gameplay") and compounds this potential for frustration with moving platforms, deadly floors, time-based beam puzzles and, obviously, the disorienting portal conceit itself. Also, the "rusty innards" visual design of the final stretch feels a little misjudged and ugly, which is a shame seeing as that is when the game really kicks into gear.

Perhaps we can forgive the aforementioned soft difficulty curve, however, as I think it helps make Portal absolutely the kind of game you'll want your non-gaming friends to try. Intelligent. Non-violent. A reasonably accessible setting. Genuinely humorous. You have to hand it to Valve for adopting and adapting Narbacular Drop (the student project on which Portal is based) into something that not only adds a new dimension to their "kill bad guys" Half-Life gameplay, but at the same time makes their work feel more cutting edge than ever. It's Half-Life 2's Gravity Gun all over again.

So Portal does its job within the Orange Box compilation, taking a brilliant left-field idea and successfully merging it with Valve's universe over an entertaining few hours of gaming. And in its own right the game lives on a little longer in the taxing Bonus Maps and the Achievement targets that will no doubt prove furiously addictive to those with the requisite gaming genes. Disappointment that the puzzles are not as labyrinthine and mind-bending as the original trailer suggested they might be, and that this is perhaps not the definitive exploitation of such a wonderful game mechanic, should be tempered with the knowledge that once the experiment is complete, there actually looks to be more life (or should that be half-life?) in Portal than we might ever have imagined. Rating: 9.0 out of 10.

According to ESRB, this game contains: Blood, Mild Violence

Parents should know that the only blood and violence in the game, and that to which the ESRB rating refers, is when the player finds themselves in the firing line of a sentry gun. The only hands-on violent act the player themselves can perform is, hilariously, to gently push over one of the sentry guns so it becomes inoperable. More subtle adult content can be found in the occasionally sinister and suggestive humour of robot narrator GLaDOS, but it is not explicit enough to warrant an ESRB warning. The thinking must have been that if you are mature enough to understand the joke, then you are old enough to have heard it.

While the game plugs into the Half-Life universe (and for that matter the great value Half-Life bundle The Orange Box) enough for it to be essential for fans of Valve's legendary shooter series, the most fitting audience for the majority of Portal's gameplay seems to be those who enjoy stage-based puzzle games and lateral-thinking challenges. It is one of the few first-person titles that I would recommend to a gamer who is unfamiliar with the format, or unreceptive to the first-person shooter archetype. Although some control skill and speed is required later on, the vast majority of Portal can be enjoyed by thinking logically and methodically about how to overcome the problem in hand. And if that sounds boring, rest assured that the humour, flair, and satisfaction that come with progress make playing Portal an absolute dream.

Deaf and Hard of Hearing gamers will find Valve's well-respected subtitle support in full effect. The "Closed Caption" option allows every incidental noise and sound effect to be transcribed onscreen (if sometimes unavoidably quickly), with colour-coding to aid comprehension.

I just finished the game. I loved it. Absolutely loved it. This will definitely be a favorite of mine for years to come. I also love the ending theme song! Brings much meaning to the conclusion. I keep listening to it over and over. The unique puzzle scheme with a twist of danger. The female narrator GLaDOS seemed unintentionally funny. Very memorable game.

I believe that the “rusty innards” concept of the final level, as you put it, and random areas of other levels, help portray the real sinister nature behind the science center. Yes the stage could be considered ugly, but would you really feel a sense of danger in the nice white walls of the test lab?? No. The general dirty atmosphere of stage 19 shows that all is not as it appears for the first 18 stages, and in fact you won’t get any cake.

Portal is indeed a fantastic game. Simple concept, easy to learn, challenging to master. The narrative is quite surprising and very well done. It’s only too bad that it’s so short. I find it hard to recommend as a stand-alone title for $20 because of its brevity, but as part of Orange Box (which is how most folks will buy it anyway) it’s a great game.

What an imaginative game Portal is. The story thats weaved throughout the gameplay is what gets me the most. Valve was successfully able to put emotion into a puzzle game and connect the story to their flagship series at the same time. The portal gun itself is just as innovative and fun to use as the gravity gun and I can’t wait to see how it’s implemented into a full blown first person shooter gameplay scheme.

“I find it hard to recommend as a stand-alone title for $20 because of its brevity” Yeah, as ever I kind of side-stepped (or strafed) purchasing advice as I tend to think people can make their own minds up about that sort of thing, so long as you indicate an excessively short or long title in the review. But I would say that while it seems odd not to grab the Orange Box as a whole, I’d still shell out $20 for Portal because it’s just too memorable to pass up. If you’re interested in seeing (and supporting) something new… Read more »