Made by Rock Band and Guitar Hero pioneers Harmonix, Phase harks back most closely to the developer's outstanding debut titles Frequency and Amplitude. A now very familiar vertical track scrolls toward the screen, while the player attempts to hit the notes dotted along each of the track's 3 lines with the use of the 3 central iPod buttons (left, centre, right).

The notes are, of course, intended to match the beat of the music, while a secondary challenge comes in the form of occasional wavy lines of dots that must be collected with a pleasingly tactile sweep of the iPod wheel. In spite of the odd glitchy pause that can throw your timing, the controls work very well indeed and are as solid and reliable as you could hope for. 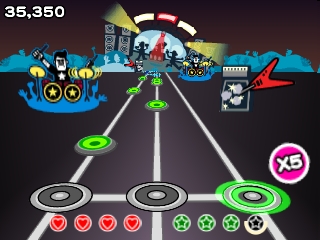 Sadly, no matter how much you attempt to read patterns in the beat layouts and pretend that Phase is reading the song perfectly, too often the game feels like a button-pressing exercise that happens to have a custom soundtrack feature. There is little consistent, palpable connection between the music and the beat patterns you're being asked to follow, something that always prevents a game from bridging the gap between gameplay and audio, which is the key to the genre's magic and potentially transcendent highs. It's the same reason I was left cold by cult favorite Vib Ribbon.

When Phase works it's tremendous fun, but only when the beats come thick and fast or you're trying to hold onto a combo multiplier does the music occasionally gel with the gameplay to add a fun layer of intensity. And game difficulty versus the urgency of the music is just too vague and inconsistent a parallel to really rank this in the same league as Harmonix's earlier audio tapestries. 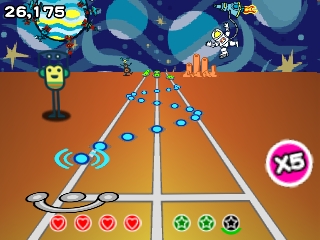 Ambitious and well produced, it's hard not to like Phase, but it is easy to ignore it. Considering how quickly this game eats into your battery power, I find it unlikely many commuters will prioritise it over looking dreamily out of the window. Maybe in another iPod generation or so we'll move on to Phase 2 of this experiment, and perhaps find ourselves much more willing to play along. [Rating: 5 out of 10]